Sawmillers try to guess the species of wood recovered after thousands of years buried in the mud. November 13, 2005

Question
This is quite possibly the most valuable log we've ever sawn but we're not sure what it is. Does anyone have any guesses? 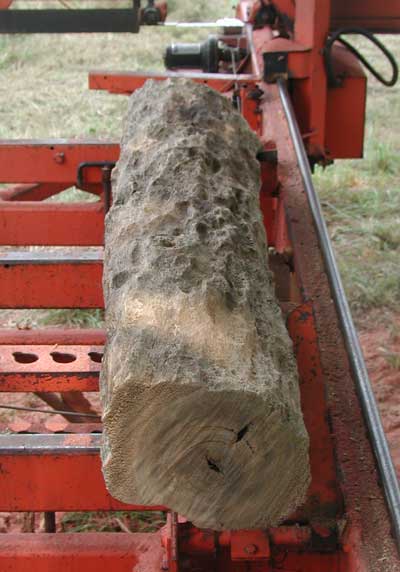 Forum Responses
(Sawing and Drying Forum)
From the original questioner:
Here's a look at the inside. 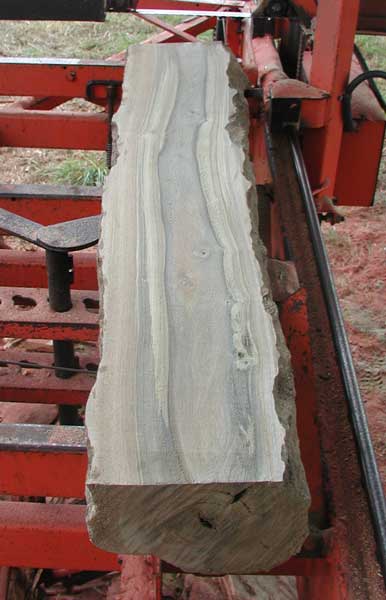 
From contributor E:
My guess would be ironwood or dogwood but I really can’t tell from the color of the photo. Is it a domestic or an import?

From the original questioner:
It’s definitely domestic – there were no imports when the log fell. I don't think it's dogwood or ironwood, as it’s sawed like poplar.

From contributor E:
My only other guess is Paulownia.

From the original questioner:
I don't think Paulownia occurred in the forest it came out of. My best guess is that it's Tupelo. Here's a better picture of the grain below. 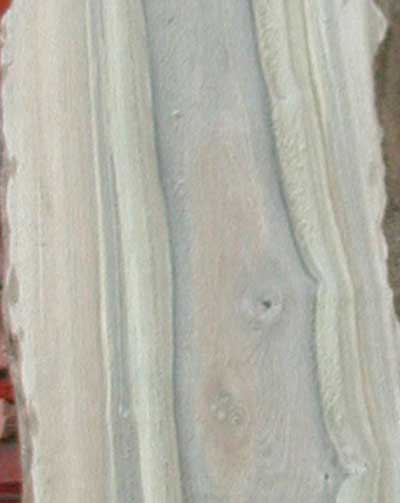 
From contributor K:
That doesn't look like Tupelo (Nyssa sylvatica) that I have sawn, although it may a subspecies. I have a log ready at the mill 20" DIB.

From the original questioner:
While my gut feeling has been Tupelo since we first opened it, I am not absolutely sure and will be magnified ID later. The reason I keep coming back to Tupelo is that we found several much larger bald cypress trees in the same deposit and several flitches showed markedly interlocked grain.

From contributor K:
The grain looks nice on that tree. I wonder if it has spalting characteristics.

From contributor C:
Looks like butternut to me. If it was fresh I could tell for sure.

From the original questioner:
The log came from an alluvial deposition that has been dated to approximately 10,000 years ago. It was dug up last week along with some large bald cypress trunks by the Army Corps of Engineers. They were already preparing a burn pit when a friend of mine associated with the project showed up and had them set aside the logs for me.

From contributor M:
The interlocking grain has me thinking that it may be elm.

From the original questioner:
Elm was my third intuit when we sawed it. One of the flitches had a very distinctive flame-swirl of interlocked grain just like I'd expect from elm. The color is a little off but that could be due to the environment it was in for the last 10,000 years - the sawdust was almost teal colored as is came out of the chute, quickly turning brownish gray as it hit the air.

From contributor P:
My guess is walnut. Beside the bark that looks like it's been buried in a swamp a while, it looks like a black walnut I recently delivered

From contributor R:
To me it looks like chestnut oak. If the sap wood is brown, most likely it is a chestnut oak.

From contributor H:
I have sawn a fair amount of black willow, and that looks just like it. The low land swamps are the only place that species grows, and it rivals black walnut.

From the original questioner:
After planing the piece pictured above, it appears to be poplar. Here's the second log we sawed from the same deposit. I've been corrected by the ecologists in the know - they say that the logs are likely 13-15,000 years old.