A Wood Mantle for an Existing Stone Fireplace

A discussion of design values and installation issues for a new wood mantle to be installed onto an existing cobblestone fireplace chimney. October 3, 2011

Question
A client of mine would like a new mantle installed onto their existing stone fireplace. Would you scribe the wooden mantle to the stone or have the stone cut to accommodate the new mantle? How would you attach the new mantle? I have included pictures. The first is the existing fireplace, and the second picture is an example of a mantle similar to what will be fabricated. 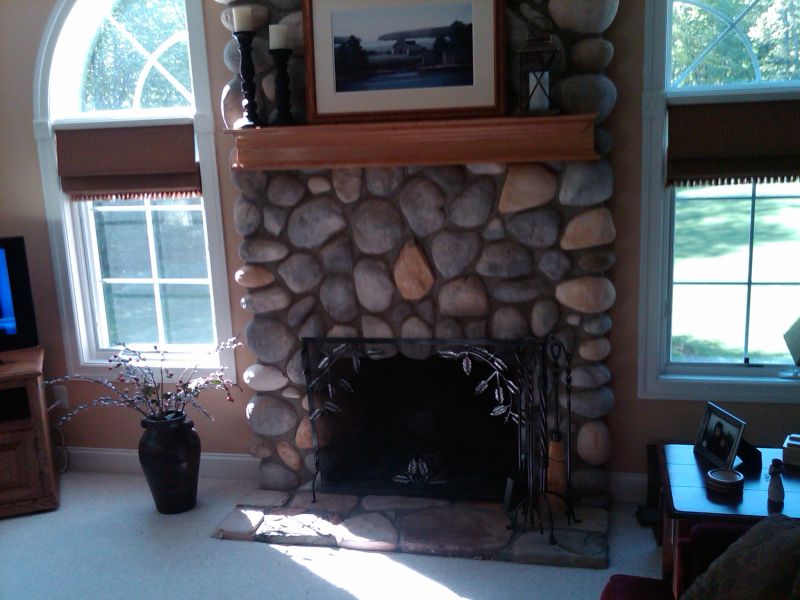 Forum Responses
(Architectural Woodworking Forum)
From contributor B:
Esthetically I don't believe any finished furniture-grade mantle shelf should ever be made to look embedded into a river- rock fireplace or any kind of rough stone facing. Normally the only wood that you would ever expect to see in this way would be rough structural timbers. Therefore, you might consider an embedded "hand-hewn" type shelf or perhaps a flush timber lintel to support your finished mantle. Either way, install the wood first and stone up to it (just as if the fireplace were constructed from real boulders instead of a facade). Avoid copping to the stone since that would be an imperfect fit at best.


From Gary Katz, forum technical advisor:
Definitely, mantel first, stone second. And I agree with about the design, too. The one in the picture even looks a little funny because it doesn't really 'fit' with stone. Profiled mantelpieces and stone surrounds just don't mix well, unless the stone stops beneath the mantelpiece.

From the original questioner:
The mantle pictured is just the starting point of the design, it isn't going to be copied. The stone is already up, and has been for ten years. How would you deal with that? Would you scribe the wood or have the stone cut?

If you choose to use a rough hew beam or similar you would have to cut the stone as it would be difficult to scribe a solid beam. If the beam was "faux" (made from flat stock) then you could scribe it but I image it would still be less work and look a little more architecturally accurate to cut the stone.

The primary issue as pointed out really is a design issue because the mantle design proposed does not fit the design of the wall/residence. A furniture grade mantle should not be installed on a stone wall. In any event, I would create an accurate drawing (Sketchup) of the proposed mantle on the stone wall and show the client. If you are both happy with the way the drawing looks then proceed with the install.


From contributor M:
Take off the old one first; you'll get a better idea of what you are working with. I imagine that you should install as close to the wall as allowable by the stone, then mortar the gap.

From contributor C:
We just finished a similar project adding shelving and cabinets around an existing stone fireplace. We incorporated both techniques - coping wood filler pieces to fit the river rock and cutting away the rock to receive the shelves. Either way it was a lot of work, period. Price the job accordingly is my advice. You could also just mount the mantle (square and plumb) and leave the gaps, or allow for a separate scribe piece to be added. Or maybe fill the resulting gaps with concrete mortar?

From contributor O:
Do not cut the stone inside an existing finished room as it will create a very large mess. The existing mantel appears to be recessed into the stone. If so, remove it first and then remove enough stone below to accommodate the new mantel. Then have the stone cut and laid back to the new mantel. This will give you a more finished original appearance.