An architectural woodworker gets ideas for making a too-wide handrail intersect gracefully with an octagon-shaped newel cap. December 17, 2003

Question
We are doing a project that involves running custom milled handrail through octagonal newell post caps that are milled with the same profile. The width of the handrail is wider than the flats of the octagon so that if we coped it, we would have to allow for 3 sides of the octagon. We are following an architect's drawing and didn't realize our dilemma until all our pieces were milled. Has anyone come across a similar situation?

Here is an image of the handrail. 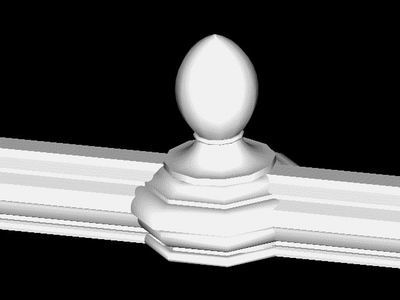 Forum Responses
(Architectural Woodworking Forum)
Remake the post caps if possible. That would be my first choice.

The problem with coping, other than the obvious near impossibility, it that the intersection is not a line that is a result of a mitre. You will end up with a bizarre serpentine looking curve that will not be pleasing. The architect probably will not like it either.

One possible option, if remaking them is out of the question, is to grind two sets of knives that mimic the intersection curve. They would be like a cope and stick set. Expensive, plus tricky to do in terms of tearout and fixturing to hold the caps. Your solid CAD model shows very well that you have ended up with a very tricky cope that is now actually two different profiles resulting from the 45 degree kick of the octagon. It's like coping together two different profiles.


One way to do this is to miter the rail with the centerline as the long point, and cut the matching miter into the octagonal cap. Draft it on paper in plan view and you'll see how it works. The second way is to cope the end of the rail to meet the octagon.

Miter method is simpler, tooling-wise, and the point can be squared off at the rail flat to keep from splitting the cap in two. Four to six cuts are required for each intersection, though, so accurate jigging is needed.

The cope method is easier since it is only the rail end that needs one cut (albeit to exact length). If you can cope with a shaper or similar, a solid backup is necessary to avoid terminal tearout. Saw coping is a possibility, but tearout will still be an issue.

Historically the miter was cut in the field, and carved to fit, and the cope cut in the shop before the rail was profiled.

The coolest - third - way would be to cope the backs of two "half" octagons and locate them wherever the caps needed to be. You could even cover a rail joint handily.

And a fourth way would be to remove the profiled section of the rail in a mitered area and replace with something like a "half" octagon. This is similar to what one does with beaded face frame joint intersections.

All in all, it sounds like fun, but then I'm not faced with actually delivering the product.


I've done them a few times. I even had an easeup run into a newel post. I ran extra rail and split it in half and mitered it to make the caps. You're lucky the ball cap covers the miter on top. I used a plywood center to wrap the molding around. It's actually easy to do, just time consuming.

A lot of good suggestions above. Here are a couple more.

One, re-mill the hand rail to a thinner profile so that it does fit on the flat of the octagon. This will work so long as all involved agree with the narrower hand rail and it doesn't have to be so narrow it looks ridiculous.

Possibility two is a bit more radical, and I just realized already covered in a post above as his "coolest" plan. Either make two half octagon caps with copes that pinch either side of the hand rail, or make one with the center cut out and coped (router bit cope cutter?) so the hand rail travels through it. The idea in the above post is probably better.


I would suggest creating a jig and recess mitering the cap on a table saw to create a beak cut. Then just miter the railing with 2 45's so it inserts. It may look better with a shallower angle, but it will work and look very clean. It would be similar to a four-way miter on a coffered ceiling.