If you plan to air-dry posts and beams for a period of years, here's advice on stickering, sawing over-size, end-sealing, et cetera. October 26, 2011

Question
I want to build a timber frame house in about 5-10 years and want to use seasoned, air-dried beams for it (spruce). I cut the spruce in winter (December 2010) and will saw them probably in April (2011). I am going to use a Woodmizer LT40 to make the beams and I will box-heart them all (one beam from each log). Most of the beams will be 8x8 and 8x10 (6x6 for the purlins).

I was wondering if it would make any sense to cut them 9x9 and after they dried and maybe have some bend or twist in them, put them back on the mill, cut it to 8x8 and hand plane them?


From contributor X:
Also use the tallest bolsters you can - RR ties work okay if they're in decent shape but if you can get them even higher than that, it would be even better. If you have an area where you can park them over gravel or concrete that would be ideal to help minimize bugs and uneven settling. Check them occasional for bugs in case you need to spray them, and maybe even treat the ground around the stacks twice a year no matter if you see bugs or not. I have no experience with Spruce so that may not be necessary but with long term pine storage this is what I have done. It may be overkill but I gravitate that way.

Obviously make sure you keep them shaded well and protected from rain. If even the side of a stack gets sunlight everyday it will dry the beams unevenly and also check the exposed sides severely over time. Be picky about stickering them as evenly as you can, getting the stickers aligned over each other and put as much weight on them as possible - heaviest timbers on top.

The airflow Contributor A mentioned is critical to minimize mold growth, and I invite correction on this if I am wrong, but based on my experience it is also possible to have too much airflow. I live on a hill where the average winds are considerably higher than what the lowlanders have and it is also much higher than what the USGS charts say it is in my region. It's because I live just north of a lake so I am exposed to a sort of micro eco system. If you live in an area like me make sure they aren't exposed to consistent high winds because they will dry too fast on the outside and that will cause all sorts of nice shapes - aircraft wings, boat keels, and the like. When I first began this dance I had nearly entire lifts of otherwise stable species develop excess warpage by setting them up on the hill exposed to unrestricted airflow.


From contributor W:
I'm no expert, but have looked into timberframe homes quite extensively. I have noticed that the majority of them cut and erect the frames while the timbers are still green. I'm sure that part of the reason is that the wood is much easier to work, but I don't know if there are other structural reasons also. You may want to check with some of them and try to get more details. Did you end-seal the logs when you cut them? If not, you may want to do so.

From contributor A:
Most timber frames in hardwoods like oak are done fairly green but softwoods are done in part dry to kiln dried. Timbers that take mortises are better greener than the beam that has the tenon - not always possible. You really do not want to use kiln dried timbers with green ones. Below is a photo of an "H" sticker for timbers. 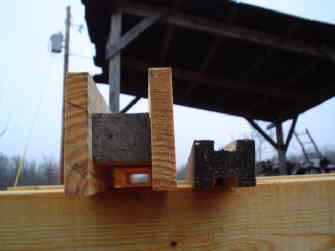 From the original questioner:
Contributor A – you mentioned "Since it is going to be a long time before you use the timbers I would suggest that you oversize the timbers and make sure that the logs are bucked at least a foot longer then the timber needed." The trees have been cut, limbed and bucked in December 2010. It is a very good tip, thanks! The good thing is that I did cut them all about one foot longer than needed. I don’t know yet if I am going to end-seal the beams. It’s spruce and I cut them in the winter when the sap was down. I selected all the spruce (straight, not a lot of branches) and I am only using the butt logs. It depends a little bit on the drying location. I probably won’t seal them if I dry them in a shed. If I leave them outside exposed to wind and sun I will probably seal them..

Contributor W - I want to use air-dried beams (in the end I will store them in my shop) for the following reasons:

- They will be easier to handle because they will be quite light (that was a big advantage back in the days where you didn’t have all the machinery).

- There is only little shrinkage when using dry material. I don’t expect it to change a lot (compared to using green timber, especially when putting that into an indoor environment, putting heat to it!). I know where cracks are so I have a little more control. In total, I expect much tighter joints than I could ever get when using green timber.

- I can take my time when working with the dry material. You can live in a trailer or in your shop next to your building site and work whenever you have time.

I think many use green timbers today because it is easier and less expensive. They probably used green timbers back in the days too because sometimes they couldn`t afford to wait seven years. However, that doesn`t mean there is a better (but maybe more time-consuming) way.

Working with hardwood like white oak might be a different story though. White oak is so tough and hard, I think one could cope with joints that aren’t as perfect as one which one would get when using dried red spruce. Also, cutting joints and tenons in dried oak can be a real pain, no comparison to dried spruce. What do you guys think of my actual question/idea?


From the original questioner:
So how much bigger should I cut them - one inch?

From contributor A:
I have not sawn spruce since it does not grow in the Ozarks. If it is like SYP then an inch on each measure would be fine 90% of the time. Since you are going to leave them for a long time I would look at leaving an inch on each face or two inches on each measure. This will help should you get some rot on a face.

From contributor R:
I had read that one advantage of using green timbers was that the mortises shrunk and tightened up the joints. It seems the tenon would shrink as well so I’m not sure of the overall benefit. That sounds like what Contributor A was talking about using greener wood for the mortised timber.

From contributor T:
I cut a large quantity of spruce 8x8 timbers a few years ago. We were going to build a square log hunt camp . We stickered them well, and they were tarped well. About three years later we changed our mind and decided to go with conventional framing. I found that many of the timbers had a slight twist and some checking. It was necessary to put them back on the mill and take a skim off to correct the twist. I cut them 2x6 and 8 mostly. In most cases a one inch overcut would allow trimming.

From the original questioner:
Contributor A - I think I will go for 9x9 if I want an 8x8. I hope this will be enough. But I have confidence in my wood (straight, almost no branches, almost no taper, sound, cut in the winter time). I hope I will be able to move the wood in a barn before the winter or next year.


One strategy I used when building my timber frame home was to have extra timbers so the ones that did not dry straight I could cut up for interior trim and doors. I kiln dried bald cypress timbers for four months and this reduced the average moisture content to about 35% but the interior was still wet. I did not have much checking and the timbers were much lighter.