Bandmill Blade Sharpening on a Budget

Advice on setting up to sharpen and set bandmill blades, with a minimum investment of money (if not time). June 18, 2010

Question
My sawmill setup is basically a hobby and for personal use only. I don't want to keep sending out blades for sharpening. Other than buying my own sharpener (most are expensive), is there a way to do it myself using simple tools and procedures?

Forum Responses
(Sawing and Drying Forum)
From contributor M:
Even for hobby sawing, $6-$8 to have a band sharpened and set is a bargain.


From contributor P:
There was someone who used a Dremel tool (freehand, I believe) to lightly sharpen the cutting edge of each tooth. I think he would still periodically send the bands out to get them sharpened and set.

From contributor B:
I saw a video on youtube where somebody had converted a chainsaw grinder to sharpen blades.

From contributor R:
Building Your Own Bandmill, Maybe


From contributor C:
Ed Zimmerman builds and sells a band sharpener that is a modified chainsaw sharpener. Less than $500. I own one and it works real well.

From contributor J:
A few things to consider... I've found that I can't use a resharpened band saw blade unless all the teeth have been reset as well. A band saw blade typically comes back from the saw shop freshly ground but not reset. Your home-made sharpening jig has no provisions for that either.

If you're putting a lot of stress on the blade itself (like me), then when it's dull, it's definitely time to throw it out. A nicely re-sharpened (but formerly abused) band saw blade can snap anytime... Wham-o!

If I've kinked or twisted a blade, I'll also toss it in the trash. I never try to straighten or twist it back for the same reason. In my opinion, a resharpened band saw blade just doesn't cut it. 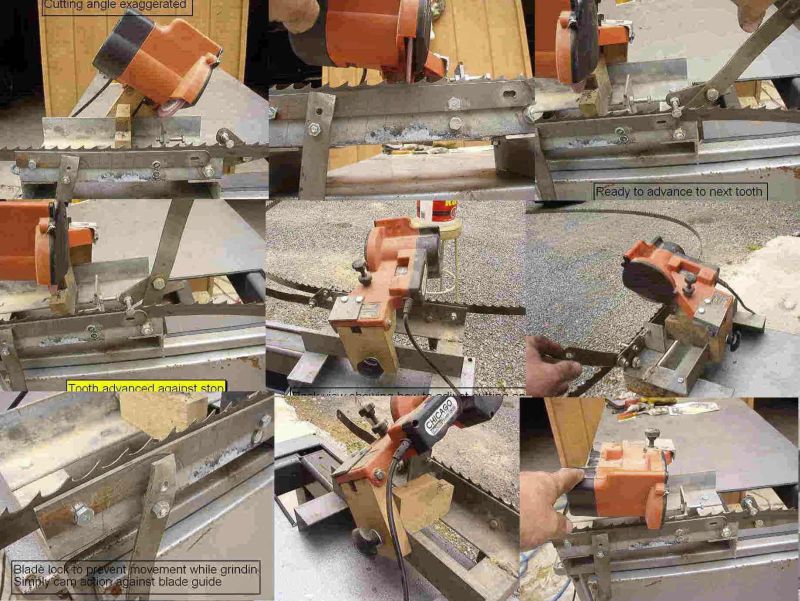 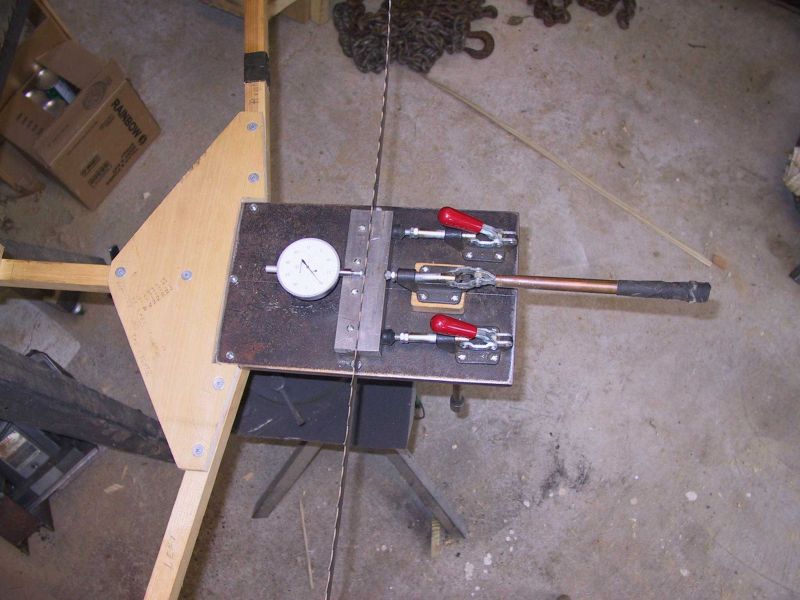 
From contributor T:
A manual setter is not expensive, especially if you build it. You can do it all in-house on a shoestring, without sacrificing quality.

From the original questioner:
I am very grateful for the ideas. I will be able to put together something to meet my needs. The resulting sharpened blade may not be like new, but should be satisfactory for my operation. By the way, my sawmill is homemade also, and I'm happy with it.

From contributor C:
I can say with certainty that you can sharpen blades for your saw and do very well, probably even build your own sharpener. I have a friend who sharpens his blades with a bench grinder. It works. He simply put a stone from a chainsaw sharpener on it. I had never sharpened a band before last September, and like you, I wanted to do it in house. I use 1 band and sharpen it till it breaks. On my manual sharpener it takes about 3 to 5 minutes to sharpen one. You can get a real feel for just how much wood one band will cut. Works great for me. The sharpener I have looks like the one in this thread. Bought it from e-z boardwalk though. The bad part is I'm not sure I could get a band back in the box without drawing blood!

From contributor B:
I have never tried to sharpen a blade, but might try building one of these too. In the video I remember watching, he ground the face (the part that makes contact with wood - is that what it's called?) of the tooth as contributor R shows in his top center image. He said that's usually all he does unless the blade is really dull. Then he has another grinding wheel shaped to fit the backside of the tooth. How do you do it?

From contributor C:
I don't have a setter but I still am able to sharpen a band 6 to 8 times before it develops a crack and breaks. I try to stop out of the cut and take the band off before it breaks so it doesn't cut up my wheel or drive belts. I have cut 50 9 ft cross ties of oak and hickory before on 1 band. That's quite a bit of lumber out of the sides too. My sharpener has for sure paid for itself.