Bending and Laminating Ipe for Outdoor Use

Question
I have a client who is requesting a feasibility assessment on a couple of ipe bench seats. They are curved with a radius of about eleven feet. The arc length is around seventeen feet long. The architect has drawn them as basically 2 x 4's turned up on edge and bolted down to a steel plate. The seats would be about 21" wide.

I've never tried to bend ipe, though I've read online that people have had some success with it, especially if it's cut into 1/4" laminations and glued with epoxy. I was hoping that with an 11 foot radius, a 2 x 4 might be able to be bolted into submission without breaking, and thereby avoid gluing. Any input from someone with more experience would be greatly appreciated.

Forum Responses
(Architectural Woodworking Forum)
From contributor J:
I was taught to attempt a bend with the largest possible piece, then work my way down to a piece that would actually bend to the desired radius. Not a great answer, as I have never bent ipe, but it is an approach that has worked for me with other wood species.


From contributor D:
I built a deck three summers ago from ipe that included a bunch of radius work and edge-glued fascia boards. I used plastic resin glue for the laminations, which were 1/8" thick bending to about a 4' radius.

I have spent the last two summers repairing the deck. Every edge glued joint and every lamination has failed, caused by a combination of wood warp and glue failure. I have been forced to use hundreds of screws, plugs, and tinted wood epoxy to fill the cracks and bring the deck somewhat back into submission.

Keep this in mind when you think about laminating ipe that's going to be outdoors. I don't know if I could have used a better glue, or if my Washington state winters are just too much to handle, but I wouldn't do it again.


From contributor I:
Ipe is sometimes being used as a teak substitute because it sort of looks like teak? Ipe ain't teak... I've tried ipe for some boat trim and ended up pulling it all off and starting over with teak. No amount of glue or screws would tame this stuff. I stand with contributor D and his deck on this one... no outdoor ipe.

From contributor V:
After watching and working with ipe` since it was introduced to the mass market some years ago, I have concluded that it is not wood in the normal sense. Since it actually is up to 20 different species, all marketed under one name, the properties will vary from one board to another. The main difference is whether it will glue or not. Do a search here for gluing ipe`, and you get two answers - "no problem" and "impossible." That is telling all by itself. Which species will you get? You don't get to specify.

I would spend my energy on working up a very feasible alternate to propose back to the client and architect. The fact that they request a feasibility study shows they are looking to a professional for answers, so it is your opportunity to put out what you know. Ipe` was (likely) mentioned not because of intensive experience or knowledge on their part - they just know of it and know it is good for exterior use. Iroko ("Brazilian teak") is one option that can be resawn and will take epoxy well. H. mahogany is another. And find something better than steel for the base - it won't last as long as good woodwork. The base also needs to drain so the wood won't sit in water.


From contributor P:
I have done bent laminations of ipe with mixed results. The stuff is brutal. With your radius being so gentle, I believe it is doable, but glue performance is the issue. I have had the best luck with West System. But I have had failures too. With ipe furniture, good joinery is a must. That's kind of hard with laminates. In your case, with the final lam being bolted down and hard fastened, you'll be okay.

Ipe will check and crack in service, so that will affect the integrity of the lam. I found that using flat sawn wood is much better than the quartered ribbon stripe for resistance of checking. You probably can easily get away with 3/8 thick strips. The trick to gluing is not to glue to the surface right out of the planer. It is too smooth and glazed. Belt sand it or wide belt it to get a rough surface prior to gluing. This method has worked for me in the Northwest weather.


From contributor S:
First, are they willing to pay you for your time and materials? Next, maybe you should just show them the answers on this forum and opinions in others forums on gluing ipe. If they still want you to waste your time and theirs, then proceed. Pick some alternatives to recommend before you go too far.

From contributor A:
Not many people know that epoxy prefers rough surfaces rather than smooth. The best glue joints for PVA glue are freshly jointed or off a very sharp glue line blade. A lot of folks think that because the epoxy is soaking into the substrate, the surface prep doesn't really matter.

As mentioned, taking laminations straight out of the planer is prone to epoxy failures. We have seen this with mahogany, and with maple it is almost guaranteed. Ipe is going to be even worse than hard maple. I would run the laminates through a thickness sander with a brand new 60 grit belt.


From contributor O:
Don't forget to mention that they don't get a warrantee.

From Professor Gene Wengert, Sawing and Drying Forum technical advisor:
It is possible to bend this using a steamer as well as wood at 16% to 20% MC. Without steam, forget it. The steamer must be a good steamer with a commercial supply of wet steam.

I second the comments from contributor V. However, any of the ipe species will work if steamed. As mentioned, why use ipe, as there are other, easier species?

You will get better bending if using q-sawn.

Note the comment about epoxy joints; they must be thick glue joints compared to PVA. If exposed outside, epoxy is deteriorated by UV unless you use UV resistant adhesive.

Ipe will develop cracks as it weathers.


From the original questioner:
Wow. Thanks, everyone, for the advice. This gives me some good ammo.

From contributor E:
We have a similar project in progress at our shop. This is a one piece circular bench made up of laminated African mahogany strips. 2” thick, 16” wide, outside diameter of 9’. It is designed to go around a hot tub. They are having the hot tub cover made to go over the bench, so that makes our situation a little better.

I wanted to build the bench in segments from edge glued boards with slightly rounded joints at the segments and possibly unglued at the joint. The PM on the project is a former wooden boat builder - this was his idea and the homeowner liked it. Like one poster suggested, this is “non-warranted work.” I have no experience building a full circle lamination like this and my big concern is what happens when the MC changes and the ring starts growing? My segment idea might have been worse for the wood movement.

The full circle presents a few challenges over the typical open end curve lamination. We settled on 5mm thick laminations. Our method is like contributor P's - just run it down till it works easy. With your radius, 3/8 or even thicker should be possible. The length cuts for each 2 piece ring have to be made as we’re laminating. We pin nail the strips on, then band clamp after 6 rings. After we started, my coworker suggested if we do this again to build the form to the outside and work in. I think it would work better and you could do the whole thing without clamping by springing each piece in. Easier to get the length cuts also.

For glue we are using resorcinol from CP Adhesives. We started with Dap resorcinol from the local hardware store. The CP glue is a lot better and less expensive. Over $200 of glue in this bench! Final surface on the strips was 80 grit on the WBS with a steel drum. The marine industry probably has better waterproof glues now but I have always had good luck with resorcinol. Time will tell if this works… 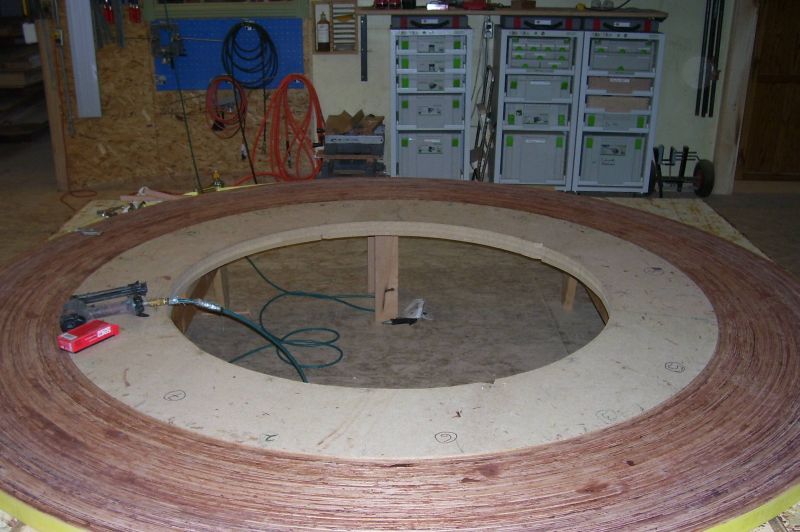 
From contributor B:
I read with interest that bending ipe can't/shouldn't be done. I have just completed an exterior curved staircase using ipe. So far, no problems and no problems expected. We can get into the various woods called ipe, but approach is what is important. I use ipe often and find obvious adhesives will not work (wood glues, construction adhesives). Mechanical fasteners and epoxies will work. Stay away from obvious epoxies like West System, East System, Cold Cure, etc. These epoxies are purchased in bulk by manufacturers and fillers added. Hence the 5 to 1 ratio. Go to the source and buy a good epoxy. Try Union Adhesives in Toronto - he sells the best epoxy I have ever used and I've used many. 1 to 1 ratio. Plus it is cheaper. I had my 2 by 8 sawn into 1/4" laminates where I clad a stair structure of pressure treated plywood and lumber. I used stainless staples to affix the ipe to the pressure treated substrate with lots of epoxy and clamps. The last layer, I used epoxy and clamps only. I cleaned both surfaces with acetone to remove any oil residue just before gluing. The stairs flare from 4 to 5 feet over the run.

From Professor Gene Wengert, Sawing and Drying Forum technical advisor:
Resorcinol is a very durable adhesive and is not sensitive to heat or moisture. The comment about avoiding certain epoxies because they add fillers is interesting. Can someone give us proof of this claim?

I used West Epoxy on my sailboat and it is still together, so I do not think that even if the adhesive has fillers added, it is a problem. It seems to be working well. Incidentally, I did add wood dust filler myself when making an epoxy fillet joint.