I drill a lot of 3 inch holes in counter tops and desk tops to accept those plastic desk top grommets.

We have been using the standard bi-metal holes saws. They suck.

There has to be something better. What is it? 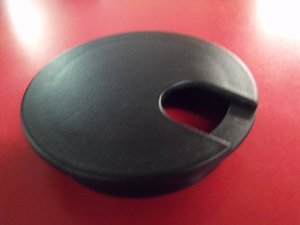 We have used the same Starrett's for 10 years and sharpened them three or four times, max.

I have a Bosch HTC300. Pricey but shoots thru a 2" counter or 2x4 blocking or anything else in the way almost before you can get off the trigger.
Also requires their quick change mandrel.

Carbide TCT holesaws are the go. Buy a set they are much better deal and they will be an heirloom gift to your feral offspring.

Whatever the holesaw you use, consider this; it's usually the swarf in the cut that makes 'em perform badly.
Start your holesaw like normal, but just touch the surface to define hole. Then drill a relief hole or two with a spade bit that just touches perimeter line. Then back to holesaw, swarf will fall through hole(s). Mo' betta.

Hmmm.. I never knew about carbide tipped hole saws. I would think the tips would crack easily due to wobbling around from hand feeding???

I just watched a video from Fast Cap about a new design of hole saw they are coming out with. It is kind of an oval shape so it makes a bigger kerf, cuts faster and easier. So they claim.

They have been making carbide saw blades that cut steel for a long time. GreenLee makes carbide set of holes saws for drilling stainless steel.

I think I saw on a YouTube video a carbide tipped one that cuts about anything including ceramic tile? I think it might be the Bosch that Jim mentioned but I'm not for sure.
Actually, one of the best ones I've used and probably my favorite is a cheapo Chinese that I used to get from a flea market. It comes with several sizes and they all fit on the same arbor, kinda hard to explain. One of my favorite features was that it had a spring around the drill bit that would push the wood plug back out when finished. The hole saw part was very thin metal so it sliced through plywood in a heartbeat. I can't hardly find them anymore though...

Why is anyone making 3" diameter holes anymore? With all the wireless devices out there and smaller connectors for printers and other hardware, I have not used anything bigger than 2" for several years.