Beyond the Spiral: Serpentine Stair Example

Here's a quick tour (concept to finished product) of an ambitious free-standing staircase project that includes opposite curves. January 12, 2012

Question
I'm building a curved staircase where the main structure is steel, and the handrails, tread, and newel posts will be wood. The picture below shows the project. It's basically a 180 turn, two transition steps, and a 90 turn opposite.

The radius of the curves are about 1' on the inside rail and 4' on the outside rail. I constructed the balusters and handrail supports by simply measuring vertically to a 32" handrail height. Here comes the issue.

When you uniformly raise the handrail a certain vertical height above the side rails, the rail on the smaller radiused curve appears shorter because the vertical angle is greater. It's the same height at the same point as the larger outside rail, but I guess there is an optical illusion that makes it appear shorter.

Is there anything that can be done to cheat a little to make it appear more uniform? 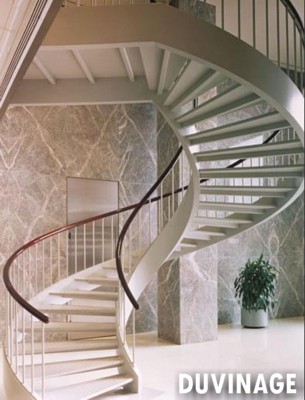 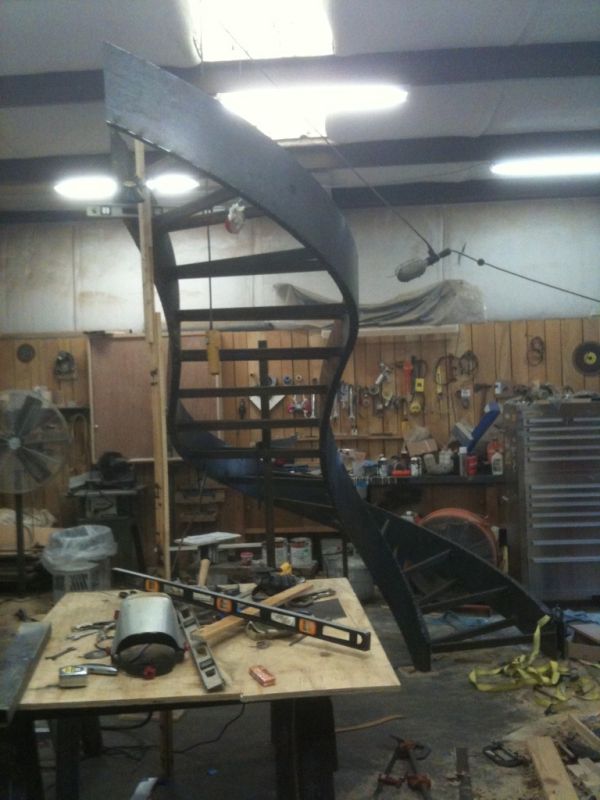 
From contributor W:
That whole staircase looks like an optical illusion. Wow. Looks like an adventure in progress.

From contributor D:
The apparent difference in heights is due to the rake of the rail/stair. The inner, tighter radius rises at a greater angle than the outer, wider radius. The term pitch can be used also, as in thread pitch.

As long as the rail height is the same at every stair nose, inside or outside, then the rail is right and the eye will adapt to it. Try to monkey with it and it will not look correct.

However, it appears that you will have changes in pitch in your rail vs. the rail in the picture. The one in the picture is a continuous radius, and therefore the same pitch/run for each tread. It appears that the run of your treads varies from tread to tread - where the treads are the outer radius, the rail will be less pitch with a longer run, but then the same rail goes to a greater pitch as the subsequent treads become inside and a shorter run.


From contributor Z:
The rise, run, and rail height pretty much dictates how the rail will be and the rail height is probably dictated by code. Just out of curiosity, how are you going to manufacture the rail?

From contributor J:
The reason the inside rail appears shorter is because the perpendicular distance (perpendicular to the pitch and measured between the stringer and handrail) is very much shorter than the outside.

Consider an adjustable trapezoid with the space between the rail and the stringer being the trapezoid. You can see that the inside trapezoid is raked much farther forward, which then shortens the perpendicular distance between the raked, parallel lines.

Of course there's nothing to be done about this except raise the height of the inside rail. While this has sometimes been recommended, generally it's not a good idea to have differing handrail heights.

It's funny, but as the inside rail height may look shorter, when you actually walk up the stair, it definitely feels much higher. That's because the reach of your arm (which hasn't changed) is now extending farther up the steeper rail. The opposite is true as you descend the stair with the inside now feeling uncomfortably low. People, however, usually descend a stairway along the outside and ascend up the shorter inside curve.

These are all normal considerations for double-helix stairs, being part of their charm and beauty, but your serpentine stair is quite another kettle of fish. Serpentine stairs are one of those things that look impressive in plan-view but when constructed, rarely result in anything satisfactory or pleasing to the eye. In fact serpentine stairs can be confusing to the mind's eye as your brain struggles to put some form to an irregular and ever changing shape.

The worst set of stairs I've ever seen (bar none) involved a pair of free-standing serpentine stairs which faced each other and were topped and surrounded with an irregular curved balcony. The enclosing walls were also covered in mirrors. The free-flowing elegance which the architect had (somehow) envisioned turned into a dizzying fun-house complete with roller-coaster stair. I would say that the slight illusion of different handrail heights in a typical double-helix stair is the very least of your optical illusions to worry about here.


From contributor K:
One of the things that I suspect you are going to face is not so much the appearance of distance between stringer and rail, but that the actual change in rise/run will mean the individual plies will need to have a fair amount of gooseneck curve in them along the height, before being bent. Or you will have to do some end joining of parts after you make the bends.

From the original questioner:
Thanks for the info. I had a lot of time to draw up a 3D plan in CAD and take my time building. I've spent a lot of time trying to balance looks, function, and buildability. The engineer part of me knew that would happen with different rakes, but the creative side of me is a little unsure when I step back and look at it in progress. I just didn't want to change it and create another weirdness like differing handrail heights. I have since found more pictures of similar applications, and it seems this is just a fact of life.

From the original questioner:
I recently finished the staircase, and figured I would post a picture. I ended up making all the hand railing based on just raising the top profile of the main side rails vertically. I even used the side rails as the jig to make the top wood railing. There are a couple little details I would do differently next time, like making the smaller radius rail a little wider, but, overall, I am very pleased. It was a great challenge. 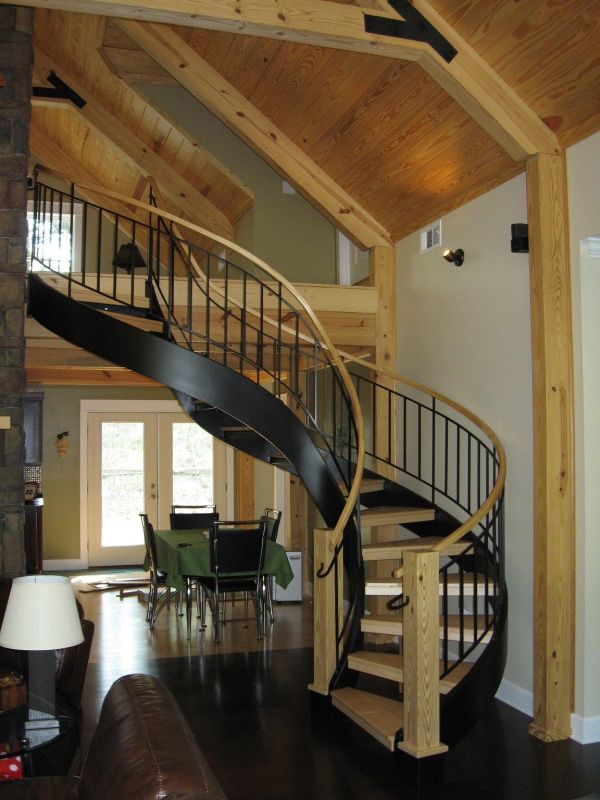