Advice on joinery and lumber choice for oversize exterior doors (5 out of 5 doctors agree: no Poplar!)October 17, 2011

Question
I have a contractor who wants me to build eight exterior doors out of poplar. The dimensions are; 42"x96"x2 1/4". They will become four sets of double doors. I wonder if traditional joinery will be adequate for these scantlings, and is it going to be safe to build them out of solid lumber?

Forum Responses
(Architectural Woodworking Forum)
From contributor D:
We are in Southwest CT on the coast and would never use poplar other than interior woodwork. When we build exterior doors we use Spanish cedar or mahogany.


From contributor G:
These wide poplar doors are going to weigh-in at maybe160 lbs each (mahogany over 200 lbs)! I think you're right for wondering about traditional joinery and such. I would also worry about hinges, frame and door jambs. I am not a door maker but I would say that this project calls for some professional engineering (and probably iron reinforcement).

From contributor O:
Poplar should be avoided in all exterior work. White oak, mahogany, Spanish cedar, or white pine are all far better selections. At those dimensions, 2-1/4" thick would be recommended. Traditional joinery is vague - I'd use cope and stick mortise and tenon joinery, with full width integral tenons and about 3-1/2" long or more.

The door's weight is more of a concern for the jamb and hardware than for the door itself once the above conditions are met. Jambs, sill, weatherstrip, hinges, and latch all figure strongly into the success of an installation, so do not skip lightly over them.

If you are not familiar with and set up to do large scale joinery, consider subbing out the work or passing it by. I like a challenge as much as the next guy, but there are things I know to stay away from. I hear from shops all the time that after we quote work, the building contractor is polling them to see if anyone wants to make some doors. At a much lower cost than a professional door maker charges. More than once, we are asked to go back in a year or four later and replace what was not done correctly the first time. "Who knew? I thought a few biscuits would hold it!"


From contributor S:
Poplar? Do you want to make these doors several times? Poplar is a interior only product, unless maybe for the desert. Mahogany, sapele, oak, Spanish cedar, and even western red cedar are what you should use. Poplar will turn bad in a matter of days, and if you guarantee your product, then you're screwed!

I do 3/6 x 8/0 x 10/4 doors on a regular basis and wouldn't even consider poplar for them, that stuff is fine for interior uses, never exterior. As to the weight, figure around 180 lbs 10/4" with 6-7% mc. Use M&T joinery and figure out how to cope the shoulders to give that C&S look that everyone seems to want.

You can do it pretty easily with the Freud Ext door router set. They just came out with one that's for 2 1/4" doors. Just climb cut the stile and rail profiles and you'll be fine. Pre-cut the tenons in whatever manner that you use, but be sure to leave material to cope the shoulders with. Make a large coping sled and get to work. Don't be worried by the size. 3/6 x 8/0 isn't really all that big. 5/0 x 10/0 x 10/4 is pretty big. The largest I've done so far as hinged slabs, I almost got a hernia installing them! They've been up for nearly ten years and have barely moved no matter the weather. 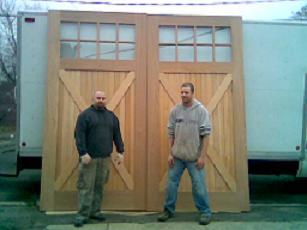