It's tricky, but yes — a four-axis CNC can be rigged to operate as a lathe for detailing cylindrical wood elements. August 3, 2009

Question
I have a project my boss wants to see if I can do. He needs a profile cut around a cylinder block (about 2-3 inches thick and 6 inches long). I was going to cut out a 1 inch radius hole in the middle of the block, and my boss was going to have a little fixture made with a motor and a circular fitting on the end, to slide the block onto. I would then bring my round nosed bit in and pause it over the center line and let it spin for a few seconds, and then move onto the next part. Has anyone ever done this before? Is it a good idea, or could it cause serious damage to the CNC? If I can do it, how fast would I want to spin the block, how fast would I want to turn my bit (if at all), etc, and would a regular routing bit do the work?

Forum Responses
(CNC Forum)
From contributor M:
What you are describing, I have seen before. Would I recommend it – no. However, depending on how you create your programs it can be done. We routinely create cylindrical columns as much as 8 feet tall. We machine one half at a time, running with a 3/4" ballnose bit. We use MasterCam to program it. Once the two halves are machined they are simply glued together. Some are left as is and some are veneer wrapped after gluing. Some also get flutes cut after the radius shape is cut too. Follow the link below to see some samples and also follow the additional link near the top of the page when you get there for more photos


From the original questioner:
Thanks, I left out a small detail I didn't think was important, after cutting out the cylinders, we are going to cut them into 4th's, what we have left is casing to go around the base boards of something. So since we aren't leaving them as cylinders I don't think the halves route would work. I think I have a good idea of how I would program it, I just wanted to make sure a moving object wouldn't cause some sort of reaction I wasn't expecting.

From contributor E:
Thermwood makes a rotary playback device for its routers. There is a limit, of course, on the diameter and length. The video below is a sample of what can be done.

From contributor J:
Below is a small 4th axis lathe. This might give you some ideas. They can also be setup to do dovetail drawers off the end of the table. What type of machine do you have? 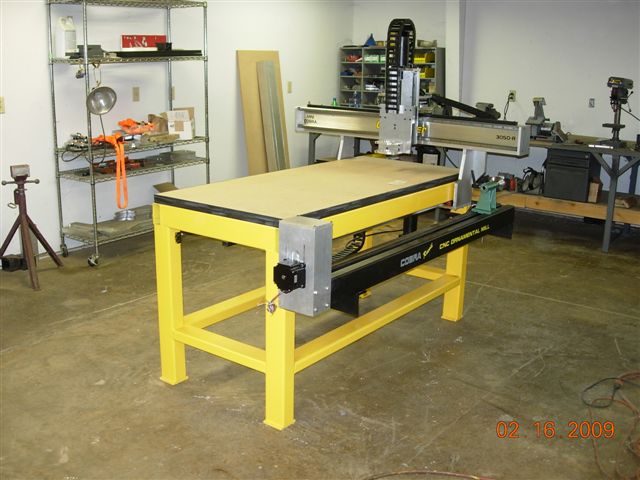 
From contributor M:
You can still do exactly as I described above, just do quarters instead of halves. They can be full right angle quarters or you can clip the inside corner, but leave enough perpendicular flat at the tangents to attach to the next piece.

From contributor K:
I tried exactly what you are talking about once. I simply mounted my wood lathe to the bed of the router and programed the profile I wanted. What I discovered is the lathe, even at it's slowest speed, turned to fast and caused a fair amount of a chatter type look in the piece. If the lathe where to be slowed down I think it would work fine. However all that being said, it sounds like you are making radius base corners and it may be way easier and cheaper to farm it out.

From the original questioner:
To contributor E: that is what I'm looking for. My boss already had the device made in house, so my last question is, does this take a special bit or can it be done with any standard routing bit?

From contributor E:
Standard tooling works just fine. Feed rates and spindle speeds are important. Note in the video that the 4th axis does not spin as fast as a lathe. I'm not an expert by any means but I have used the rotary playback.

From contributor C:
I built a lathe attachment for ours, from a DC tread mill motor with variable speed. I had a plywood bed, which is held with a vacuum. I had to machine the drive center and the whole tailstock. We have a fair machine shop as a separate business. The trick is to use the correct shear and rotation/feed direction to prevent blowouts in roughing and then use a standard, duplicating lathe tool for the finish pass. This is fairly simple on out machines as it has three heads. The lathe tool is simply mounted in a holder that bolts on in T-slots below the head. We did about 250 Western Red Cedar ballusters and it worked great.