Hot bits, sawdust, and vacuum airflow add up to a potential for fire, as these stories attest. September 28, 2009

Question
On Saturday I was doing a training session with the x3 machine. We were running a file in which I had made the mistake of asking a 1/4 inch bit to cut through the material. The bit cut about 10 feet in and snapped. We removed the bit (seemed warm but not hot) and left the vacuum on to hold the material while we went into my office to rework the pass depth on the file.

In just a few minutes one of the guys in the shop said there was a fire. I did not know what was burning, but thought to grab a fire extinguisher (they are located in many places and all corners and entrances as well as passages through the building). We got real lucky time wise.

While we had removed the bit, a small ember had begun to burn, the vacuum gave it wind and direction, and no one could see it. About the time someone smelled it, it broke through the spoil board surface.

I hope all reading this realize size of machine does not matter; they are made up of two things:
1) electrical parts
2) parts that create friction.

Be careful, pay attention. My x3 is a godsend and I would be as hard pressed as any to replace it or the building or worse... My hope is this will help the new and old CNCer. 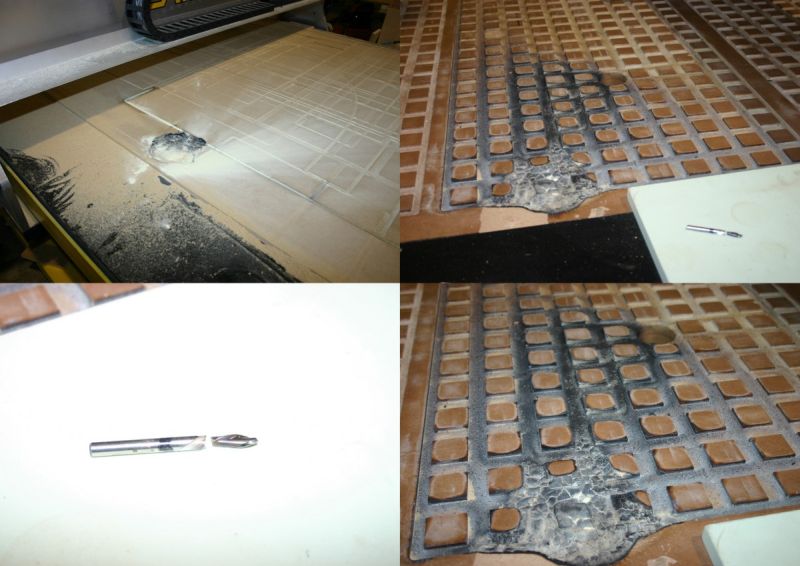 Forum Responses
(CNC Forum)
From contributor M:
Excellent post - it takes guts to let others see a mistake, but sometimes they are the best and most productive lessons of all. I was originally surprised how easily these machines can set fires, particularly over an MDF spoilboard.

Spoilboards draw air through them. Any tiny microscopic bit of heat buildup or ember or spark can get right out of hand in very short order. The best way to avoid fires is to use sharp tooling, proper feeds and speeds - in particular, not too slow - and allow a place for chips to go without piling up in the kerf.

I started a few fires on my current machine early on before realizing a very subtle problem. I had correctly calculated feeds for maximum travel speed, but on this particular machine acceleration is fairly slow. Whenever I had a slightly dull tool I was creating a lot of heat in the corners where the machine slowed down. Took me a while to figure this out. The previous operator had set a few using downshear tooling over a spoilboard.

Even with a lot of knowledge, people make errors - it's part of being human. Entering a speed 10X too slow by missing a digit is not uncommon. Add this to a tool that has gotten dull in flake but still cuts well, then slide a piece of MDF on the table and you have a fire ready to start. Bottom line, have an extinguisher or two handy near your machine, pay as close attention to the programming and stay alert, especially when you are new to a piece of hardware.

Another often missed issue... Say a fire starts in your spoilboard. First thing you want to do is shut down the machine, right? Well, be careful and think before you react. My machine has a very large dust hood and safety shroud. Say you shut it off with the bit buried in the material right over the fire. The dust hood comes down over the whole thing, creating a sealed up oven with the dust collector running and no way to shoot the extinguisher onto the affected area. Potentially a very bad scene. I got lucky in that the bit wasn't buried and I could push the head away.

There is very rarely mention of these issues in any training course or literature. Thanks again for the post.


From contributor X:
You should not be entering feeds and speeds for router bits every time you make a program. You should set the speeds in your database or CAD/CAM software tool database. This way you greatly reduce the chance of underfeeding or overfeeding, due to clerical errors, as in your case which resulted in this fire. You might want to try using a larger diameter 3/8" or 1/2" and make sure the router bit is not longer than it should be for the material you're using.

From contributor D:
The tooling databases I use have minimum and maximum feeds and speeds, but it didn't help on the day a part shifted on the pods, and on the subsequent deep mortise, the collet rubbed the work piece and started a fire. No one can foresee every potential fire hazard, and you did well and it probably gave you a healthy paranoia. Everyone who has a close call like that, I think is better for it.

From the original questioner:
It has been a humble experience to say the least. Last month I went to cut the grass at the entrance of the farm and got the bad boy lawnmower stuck in a ditch as I was finishing. Not watching the muffler (which is in the back of a large zero turn), I burned 4 acres before the fire department arrived. I am moving slowly now.

From contributor K:
Lots of times, all it takes is plunging the bit into hardwood and not ramping in and out to get things hot enough to burn.

From the original questioner:
Contributor X is right. When I am nesting my parts, I use the same setup every time and a 3/8 inch compression bit for cut outs (the x3 has 3 z heads). I had cut some foam the previous day. A fellow who was buying a machine like mine had come to see it and brought a dxf of some squares cut from birch with an MDF core. When I was cutting the foam the previous day, I was cutting through in one pass (foam) and forgot to reset the pass depth, as his parts were set for a 1/4 " tool path. One just does not realize how fast this can get away from you.

P.S. I am machining a full size chess set - stay tuned! The bishop is the test. 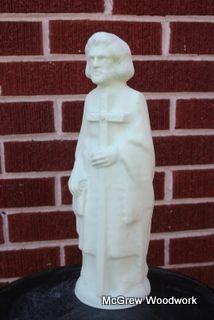