An unanswered question saved for future reference: Why is a mysterious pink color bleeding through finishes on MDF, or appearing around rubber bumpers? March 4, 2009

Question
We have a strange issue with some of our wood finishes. After 2-3 months in the field, a pink color appears around the rubber bumpers (see below). Has anyone ever seen this before? We have no idea what may be causing it. 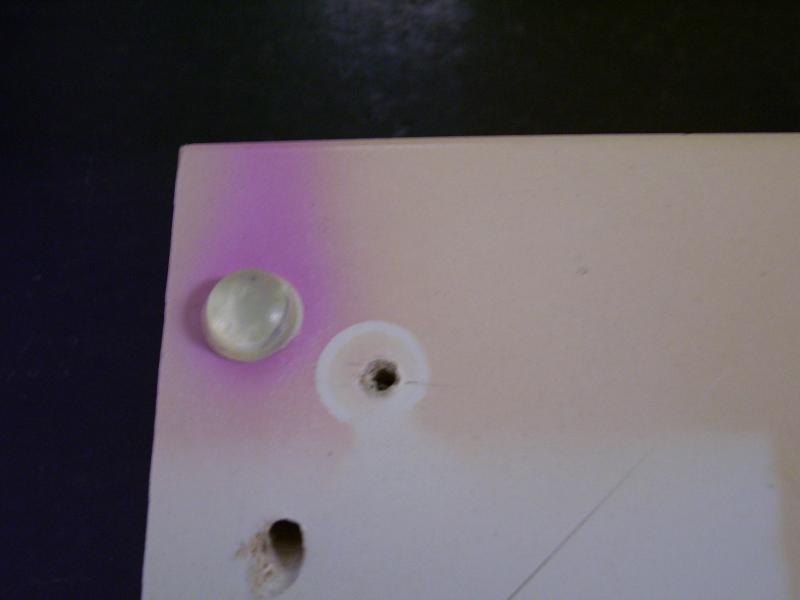 Forum Responses
(Finishing Forum)
From contributor S:
Something exactly like this was posted several months ago. A final answer was never posted to my knowledge, but I'll look to see if I can find the post.

That previous post appears to be long gone. Try asking the WW moderators if they have back up data on past posts and or hope that that original poster with this problem answers your post.


Carl Hagstrom (Systems Administrator at WOODWEB)
Below is a link that will generate a page with all the Knowledge Base articles that contain the word "pink". You'll note the first two article titles appear to deal with a problem similar to the one described in this thread. I haven't read the articles, but thought the link might be of some help.


From contributor J:
Does this occur only on one species of wood? How about different finish materials? Does it occur in more than one field location? Do you spray an adhesive on the door to hold the bumper? Are all of the bumpers affected or just one or two?

From the original questioner:
As far as I know this has occurred at least three times in separate locations. The finish is an alkyd/urea/melamine topcoat. The door in the picture is maple - not sure about the other instances. The bumpers do have an adhesive on the back, but I am not sure how it is applied. The strange thing is that not all bumpers are affected - usually just a couple.

From contributor B:
That looks like a colorant bleed. The plasticizer in the rubber bumper could have kept the coating soft in this area and allowed the colorant to migrate to the surface. Can you clean off the color with "409"? If you can, see if it comes back in a few days, if it does, then I would lean toward a colorant bleed. If it does not come back, the bumper is the cause.

From the original questioner:
The color did not come off with 409. I still have no idea what's happening. Thanks to everyone for your input though!

From contributor X:
I found the post that SA was referring to: Message Thread – “Mystery Spot”.

From contributor G:
We do two color/painted finishes. They both are a tinted base coat of pigment lacquer. One has a vinyl seal with clear conversion varnish top. The other has nitro sand seal with clear nitro water white finish. Spray is with AAA 10:1 with Kremlin MVX gun.

In both cases during the clear top coats we have a soft pink spot that appears seemingly under the clear finish. It won't sand out and occasionally requires touch-up. Our AAA system only sprays the clear coats and the lines have never had any other finish in them. Does anyone have any thoughts?


From contributor O:
Something on someone's hands, a machine gripper or something else the spot comes in contact with the vacuum lifter?

From contributor G:
This happened yesterday and I was doing the spraying. I had new nitrile gloves on that were clean and after my pass with the clear finish the soft pink spot appeared. It is always "pink" and always a soft spot. Nothing that I know of in our gun system is pink. The only thing that is put in is Kremlin grease on the inner parts, but it is not pink.

From contributor H:
It’s a mystery for sure. I would consider a conversion varnish over a pigmented lacquer to be a no-no on multiple grounds/factors, including the acid catalyst reacting with the pigment. But with the same thing happening on a nitro over nitro, you have something else going on. I'm stumped at the moment. Curious to hear what anyone else thinks may be happening.

From contributor G:
The vinyl sealer is the "barrier" between the nitro sealer and the conversion. We've used it for several years with no failure problems. (If the vinyl sealer is forgotten, the results are terrible)!

From contributor H:
I understand that you are successfully using the vinyl seal as a barrier to bridge the chemistry, but you still are applying a harder over a softer finish which is not where you are having a problem at this point. I am still stumped regarding your pink problem. Pictures may help as it is hard to visualize what is happening because it doesn't yet make sense.

From contributor P:
I am 99.999% sure that it’s the wood filler you are using. What kind are you using? I have found this happens mostly with solvent based fillers.

From contributor G:
In every case, this "pink" mystery appears on MDF panels that have been painted with the colored lacquer base and top coated. There is no filler used. I wonder if it is a small chemical reaction. The only strange thing is that it is only one spot in large multiples of doors or panels.

From contributor H:
There is little doubt that it is a chemical reaction and now you are beginning to provide some of the necessary info. First let's clear up one thing, when you used the word "soft" were you referring to the color pink being soft as in pastel, or is the finish coating over that area soft on a hardness basis?

The MDF; did it come in as sheet goods which you then manufactured into doors, etc., or did you outsource and these doors came in ready to paint? Either way, you can do some forensics to isolate the problem. For the heck of it check the product out with a UV lamp (black light) to see if it fluoresces. If you can, check out pieces before paint, after paint and after clear coat.

If it fluoresces you just got a shot at containing it before it shows up after final coat. A quick shot of Bin pigmented shellac prior to your lacquer coat may isolate it and prevent it from bleeding through.


From contributor G:
Soft as in pastel - the black light is interesting.

From contributor E:
I've seen dyes climb through several layers of CV. Is there any chance there might have been some dye splashed on the MDF? Is it stored near the stain mixing dep't at your distributor? Is there dye in the tinted lacquer basecoat? Another thought - is there any chance catalyst got splashed on it? Perhaps you could rework the finishing schedules to using more compatible products. There are better basecoats than tinted lacquer.

From contributor G:
The base coat is white lacquer undercoater that is mixed to match by the paint supplier. The weird thing is it only happens during final clear coats. I'm open to other base products.

From contributor N:
Lacquer doesn't make sense for a number of reasons. Use the MDF specific undercoater (Valspar's word). This is superior for a lot of reasons.

1) It's an acid catalyzed product just like the topcoat. What I see here is a reaction to the acid in the topcoat.

2) It has three times the solids content as the lacquer.

3) These undercoaters have a lot of talc in them to fill the routed MDF pores and make sanding easier.

Go with this all CV system. The final price is about the same as the solids of the C-V make up for the higher unit price per gallon.


From contributor F:
It's a contamination and not really a chemical compatibility issue. Wash down the substrates with lacquer thinner before doing any finishing. I think the problem begins with the substrate. As your topcoat is applied, something causes this color either to separate out or to be formed and it appears in its spot as a spot. This color could be in the mix as a trace color. Or it could be formed. If the substrate were perfectly cleaned and then not handled without clean gloves, you have you best shot at finishing without spots forming.

From contributor T:
I have had this exact thing happen with MDF, except my problem was blue. Here is what you need to do: scour with your eyes over your next order of MDF doors. Look for absolutely any chalky red substance on the surface. I've seen it red and blue. The blue got me - the color leached up through all the sealer and lacquer and caused me wailing and gnashing of teeth. It also caused a bit of fisheye on me if I tried to clean it off with lacquer thinner.

I do not know what the heck the stuff is - sometimes it looks like a paint brush stroked across the MDF, sometimes it was just small spots. But it does cause color spots. Now if you can check the doors and find those red spots before you spray, contact your supplier and kindly tell them of your problem and that you'll refuse any MDF that even smells like it came close to the red stuff. If you do not find red spots that become pink spots well, beats me!


From contributor G:
Thanks guys. I will have the guys begin to look more thoroughly at the MDF as we work the products. 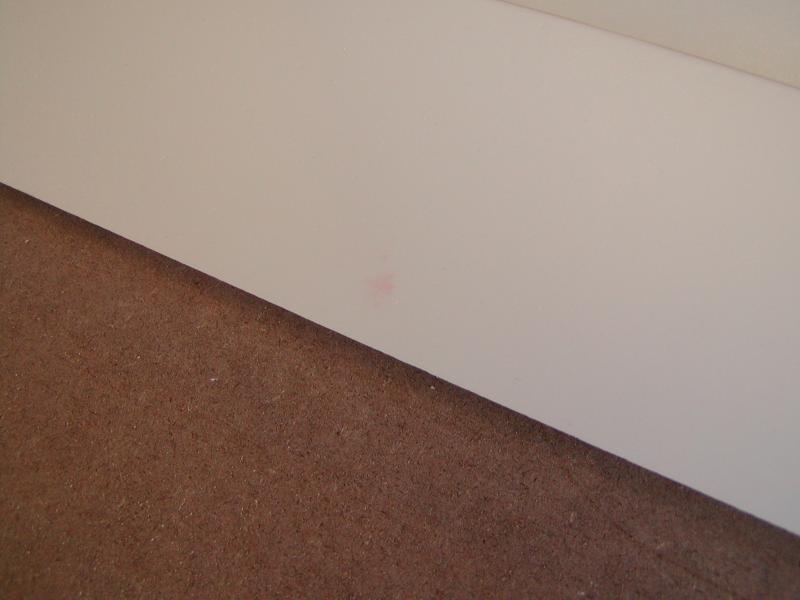 
From contributor S:
Good find contributor X - how did you do that? Do you or anyone know how to tag the questioner and find out what his conclusion was? He had a picture up that looked exactly like what the questioner of this discussion has going on, if I remember correctly, and I thought there was a bumper involved in his circumstance also.

From contributor G:
Google has a long memory. Seems there's a difference, though. The previous questioner’s spot definitely bled up from below, but this questioner’s seems to come from the top. The bumper and the pull washer masked the white under the pink and there's a shadow where something square masked an orangish something. Does the pink go through and through or is it on top of the white?

From the original questioner:
Good find. The picture with the pink around the bumper is the reverse side of a drawer front. I believe the darker, orangish area is where the drawer front sat up against the drawer.

From contributor G:
If that drawer front is only 2-3 months old and the back has discolored that much, I'm suspecting something else is wrong. Do you still have the drawer front? It may need some forensic scraping to see if the color is coming up from the wood or from the outside.

From the original questioner:
The color cannot be removed with cleaners, but a light scraping takes it off. This appears to be a surface chemistry issue.