Question
Any tips on cutting large (approximately 4"x4") square cut outs on the corners of big surfaces of timber? You can see the cut that I'm talking about in the picture. We are currently producing them in our workshop using a table saw. This isn't much fun, because the tops sometimes are around 6 ft (2 meters). Has anyone got any suggestions on safer but also neat methods of making this cut? 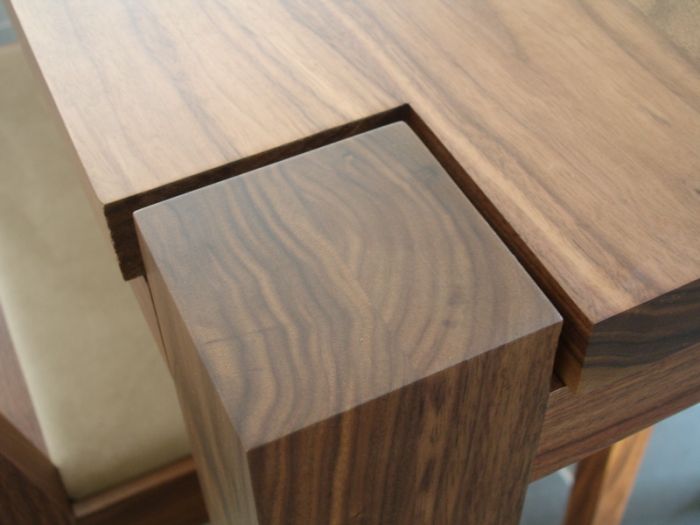 Forum Responses
(Solid Wood Machining Forum)
From contributor L:
It'll be slower, but it will be safer. Rough cut it with a jig saw, make a router template and use the router to clean up the jigsaw cut. Square out the corner with a chisel.


From contributor D:
Remember, there are two basic ways to cut wood: take the wood to the tool, or take the tool to the wood. At some point things get large enough - or small enough, to alter your approach. The roughing cut with a templated router is a good solution for small quantities. The industrial solution would be a double cut miter saw that would square it out in one cut. Taking the top to the saw, of course.

From the original questioner:
Many thanks. Would you believe we've had a double cut mitre saw sitting in our workshop for years but never thought to use it like this? The only query that I have is, doesn't the saw blade move down in an arc, rather than down from the central axis of the saw blade? So in effect, the corner cut won't be 100% perfect, it will be a very slight arc?

From contributor D:
I guess you may have to approach the blades at some sort of modified angle - not as the machine would be used normally (think safety!). A good support table would be needed at any rate. Mock up the cut on scraps to see how the angle may be adjusted to maximize the square in 3D. Perhaps a razor sharp chisel will still be needed to finish it out. There are the swivel/pivot type double miter saws, and another type where the two blades, mounted on a head, slide down guillotine style (Pistorious?). Even the old Morso type choppers could finish this cut for you, cordless style.

From contributor U:
You could set up a band saw with a large melamine table set flush with the bandsaw table and get a blade that leaves minimal marks.

From contributor T:
I would glue up my lumber so the corners are missing already, no cuts at all. Even if it is meant to be a solid slab, I'd rip it, cut off the "corners" and re-glue. The glue line would be invisible. This would be a very safe method and precise.

From contributor K:
If you're talking about some production numbers, a single or double end hauncher is the normal technique.