Cabinetmakers trace the source of a cracking problem in raised-panel doors. January 25, 2010

Question
One of our clients returns to our shop every few months with a small crack in a raised panel alder door. We finished the project two and half years ago and still she is seeing a hair line crack every once awhile. As a reputable cabinet maker, we have repaired a dozen doors already. I have never encountered such a problem like this in my twenty years plus of work. Occasionally, we have had call backs shortly after a project was finished, but nothing like this. The doors in question are lightly stained solid alder raised panel. The cracks seem to happen in the corners near the junction of the styles and rails. Any help or comments would be greatly appreciated. 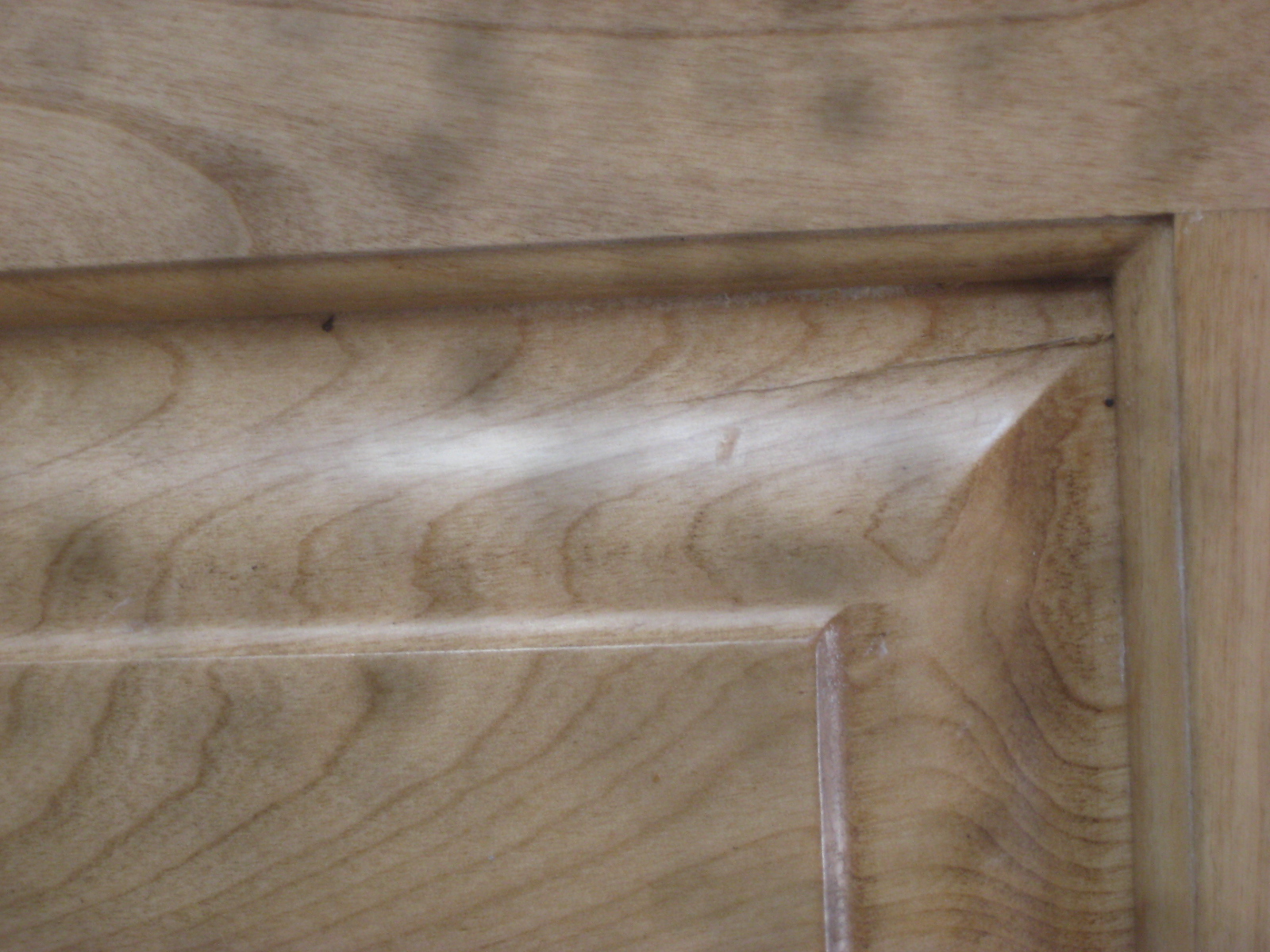 Forum Responses
(Architectural Woodworking Forum)
From contributor Y:
Could it be that while gluing the frame the panel also got glued and the changing humidity is doing it?


From contributor J:
Contributor L's thought was mine as well. It looks like some squeeze-out from the frame joint glued the corner of the panel into the slot. The panel shrinks during the heating season, and voila - a crack. It makes perfect sense to me.

From contributor I:
My thoughts exactly when I saw that photo. If it was in the middle of the stile I would say no, but since it’s so close to the joint I would say whoever is making your doors is occasionally putting too much glue in the joints. Are you outsourcing the doors? If not, are you making the doors personally, and if not have you had a talk with who is? Not many things cause cracks like that, it's either that it is stuck at once point and not another and the humidity split it when it expanded or there were checks or cracks to begin with that weren't seen before assembly that have expanded due to temp/humidity after some time.

From contributor G:
Stain, if used, and seal the panels before assembly to avoid this problem.

From contributor L:
Are you using a nail to stabilize the panel position? If you use more than one nail on each side it can cause the panel to crack. Or too big of a nail can cause it to crack. I think it is glue squeeze out though. Locked the panel and stopped its ability to float in the frame. My standard practice is to move the panel after the glue is dry but not rock hard. This will relieve any glue lock ups that happen.

From contributor X:
If my eyesight views the picture right, in the past I have seen cracks like those where the panel was too tight and the consumer had a habit of letting the door get slammed shut thus creating cracks. Explaining this to the owner is like walking on egg shells. Using bumper pads sometimes helps. Hope you don't have a constant complainer - that would wear on a person.

From contributor D:
If it is repeatable, then you should be able make another and figure out the cause.

From contributor V:
This is caused by panel glued in the slot because of cracks location. Like contributor L, I prefer to get enough glue in the cope and then shake any stuck panels loose in half an hour.

From contributor V:
A dozen is a lot since you probably have been building them the same way all along I suspect that the law of averages and worst case scenarios caught up with you. That is the panels were at their largest seasonal dimension and perhaps even at the higher range of moisture content when assembled and then they were placed in a building that is kept unusually warm and dry. Winter rolls around and the shrinkage is large creating many cracked corners.

From contributor L:
I would suggest that if you find that it is a glue lock up problem the next time you go there take all the doors off and knock the panel to break the glue lock. Make sure you do it in the direction of the grain so you don't crack a panel by trying to fix it.

From contributor G:
Again, stain/seal the panel before glue up to avoid the obvious problem shown in the photo.

From contributor D:
That's an interesting method but I prefer to stain and seal the panel and door frame as a unit. It seems like far less work to simply unstick any stuck panels while the glue is soft then the masking you must be doing.

From contributor T:
I had this happen several years ago on a fixed end raised panel. It looked exactly like your photo. It was embarrassing, and I vowed to not let it happen again. It was definitely caused by glue catching the corner of the panel. Staining the panel ahead of time is not enough, (I do that) as the glue will still grab. I do three things, now part of my assembly routine, to ensure this doesn't happen.

1. Round off the corner of the panels. I do it on an edge sander. You could also nip off the corners on the saw. Just allow less wood to get caught up in any glue squeeze.

2. Apply a little wax to the corner right before assembly.

3. As others have mentioned, knock the panel side-to-side after 20-30 minutes, in case any glues has caught the panel edge. This is also when I center the panel and shoot a 23 gauge nail through the lip of the top and bottom rails and into the center of the panel (from the rear of course) to keep it centered and prevent it sliding around.


From contributor V:
Actually, knock the panels from top to bottom. Side to side (across the grain) will split the grain on glued in panels.

From contributor G:
Custom vs. production is the difference here.

From contributor V:
The difference between is two methods that yield the same results. One just takes longer.

From contributor S:
To those advocating knocking the panel loose a little while after glue up, I presume you're not using space balls or equivalent? I haven't tried it, but it seems the space balls are firm enough they would not permit this. Or are they flexible enough to allow enough movement to ensure the glue doesn't stick.

From contributor V:
Yes, it works with space balls. The panel just needs to move a small amount to break the bond.

From contributor A:
It seems to me a production cabinetmaker would be aware of glue squeeze-out. With all the suggestions to avert the glue from grabbing the panel, I will suggest one more. How about not allowing it in the first place? Use a brush to distribute the glue, don't just apply the glue directly from the container (I know it's tempting). You have a lot more control with a brush and can avoid drowning the joint. Also, I find there is no need to apply the glue all the way to the end of the joint. I stop a 1/4 to a 1/2 inch from the inside (panel side) of the joint, thereby eliminating or at least greatly reducing the chances of the glue running out and grabbing the floating panel.

Is the crack on the hinge side? Perhaps the client or the client’s kids are stressing the door when it is being opened or closed? I used to like to swing from doors as a child, and I have seen a few doors crack in this way. It is the thinnest part of the panel that is cracking. All that being said, I would tend to agree with the others and assume you have an overly enthusiastic glue applier as the most likely suspect.


From Gene Wengert, forum technical advisor:
If you want to send me a broken door, I will examine it and test it (destructively) and give you a report. Due to the interest shown in this discussion, I will do this for you at no cost and report the results here. (Normally, I charge to examine and report.)

To seal a piece of wood is next to impossible with today's finishes. The finishes are too thin and many have good vapor transmission. Three coats of spar varnish or dipping in wax will seal the wood, but most other finishes will allow moisture to move through them and so the wood will move. The finish may slow the movement, but oftentimes we are dealing with several months in a dry or wet location (winter and summer), so there is plenty of time to have the MC change and for the piece to change size.