Orienting dovetail keys in the wrong direction is asking for breakage at the grain. December 14, 2009

Question
A customer wants a tall box made with hand-cut through dovetails. As a decorative piece I can sacrifice some of the joint's strength. However, I do not want my joints to break or fail, as this looks bad on me. Any suggestions as to how to please the customer but also build a solid piece?

Forum Responses
(Furniture Making Forum)
From contributor R:
Dovetails cut well and glued well will not break or move, but don't let the pins be too thin. The strongest dovetail joint is equal size pins and tails, but this tends to look like a machine cut dovetail. Maybe have your tails about twice the size of the pin.


From contributor M:
"Edge grain dovetails"? Are the sides of the box arranged with the grain running vertically? Otherwise I'm not really picking up on what the problem is, as dovetail joinery is a good method for box construction.

From the original questioner:
Sorry if I was unclear. The grain would be running vertical. So the dovetails would not be cut into the end grain like a typical box or drawer. They would have to be cut going against the grain.

From contributor P:
There is no reason for dovetails to be used in this manner, other than fulfilling a customer's wish. While pleasing a customer is important, you have to gingerly guide them and get them to allow you - encourage you - to do what you do best, in the way that the craft demands.

Stick with proper joinery for appropriate areas. Consider this an opportunity to rise above the odd request and educate your customer. It will also be good to provide an alternate design or joint that will fulfill their desire for something crafted. Most consumers only know dovetails.

Edge grain dovetails will actually be a weak joint with short grain running the width, and long grain to long grain is the best gluing situation.


From contributor T:
Contributor P is right on about the "only reason" to do this. Not so on about the grain orientation. There is comparable lg-lg glued surface in the edge grained joint. The inherent weakness in this inappropriate joint will be apparent when trying to dry fit the joints and those "pins" and "tails" fracture along the grain under the least bit of stress. Contributor P is really on with communicating with the client regarding alternatives.

From contributor B:
I've built several blanket chests using "side grain" dovetail joinery. Once I'd marked out the dovetails and pin locations, I would mark their center line points and then drill and insert dowels so that the length of dowel would stop the wood from splitting at the base of the pins and tails. After gluing the dowels I would then process the dovetail joiner as usual. I have built 5 chests using this method and haven't had any problems with the dovetails splitting. Use dowel diameter appropriate to the size of dovetails. They actually gave the joinery an interesting look.

From contributor V:
See, if you wait long enough someone will always encourage you to do something you know is wrong. Stick to proper joints.

From the original questioner:
Thanks for confirming my initial thoughts. I will try and convince my customer to either change the joint or possibly veneer the faces to look like dovetails. My other concern had been shrinkage/expansion across each face and cracking the already weak pins.

From contributor O:
Rule #1: Wood moves.
Rule #2: Short grain will get ya.
Rule #3: Measure twice, cut once.
Moral: Your tails will break off! You know better.

From contributor K:
I'm sure this bed will get plenty of construction criticism. If you look closely, the joinery on the slats is across grain with housed dovetails. I have a feeling that since the slats are only one and a quarter wide and the spacing is about 2 inches between, it will hold up for many years. 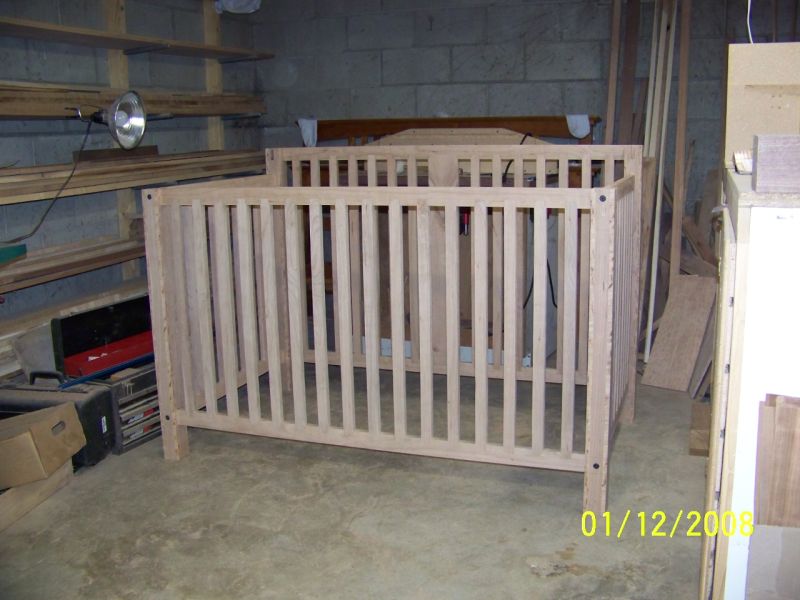 
From contributor A:
This piece would probably be best mitred.

From contributor I:
Have you considered using a mock dovetail joint? This would give you the look of dovetails without the cross-grain construction. It might look good to use a contrasting wood for the dovetail keys.

From contributor C:
Interesting thought about using a mock dovetail joint. Ideally we need to see an image of the piece of furniture to discuss more accurately.

From contributor Z:
It will likely break up during assembly. Some business is not good business. For me, it is profitable to know when to say no. I'd pass on this one.