A cabinetmaker wants suggestions for a safety switch for an unconventional microwave cabinet, but instead he receives warnings about the wisdom of the whole idea. June 16, 2014

Question
I have a customer who would like me to produce a rollout shelf for her microwave. The microwave would be accessible from the side of rollout (perpendicular to front edge of countertop). It would be handy to keep the microwave plugged in but I would like to have some way to disable power so that when the microwave is in closed position the electricity is automatically cut off. I have seen this done with low voltage lighting in closet areas but I am curious to know if there is a way to handle the switching with AC power. Does anybody know how to make this happen? 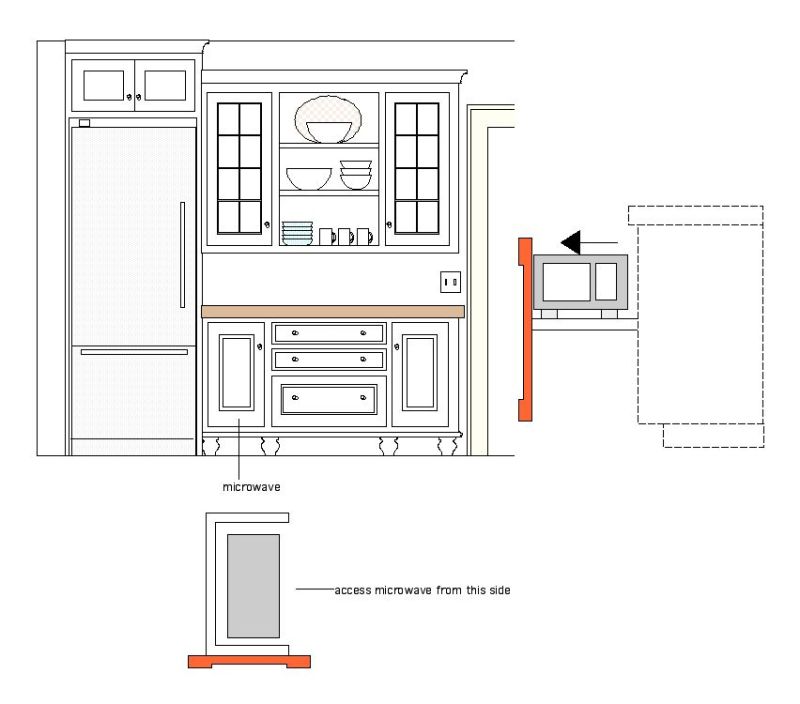 Forum Responses
(Cabinetmaking Forum)
From contributor M:
Go to an appliance repair place and get a refrigerator door switch - they are line voltage. Wire it to the outlet that the microwave is plugged into and voila.


From contributor L:
Frig door switch not likely rated for at least 15amps!

From contributor J:
There is a switch that will go in a door jamb to turn a closet light on when the door is opened. You could probably rig this up. Secondly, why does the power need to be shut off?

From contributor F:
You’re right, there are switches used in closets that I believe would work for your application. I'll leave that part of the question to those more knowledgeable than I am though. Two other points to consider though: Why would you want to cut the power to the microwave? Won't they have to reset that silly blinking light every time they go to use it? Are you accounting for ventilation in the cabinet? Microwaves generate steam which turns to moisture which is gradually released thought the m/v vents into the cabinet.

From the original questioner:
The customer's need for the microwave is intermittent at best. Every now and then one half of the team wants access to MW. Counter space is limited and the other half does not like the aesthetic of the microwave, hence the decision to store it behind a door. Since the primary cook does not see the need for MW at all and the MW advocate only wants to nuke a cup of tea or maybe popcorn, the need for advanced timer settings is minimal. All they require is a short blast of radioactivity. The reason for the switch is mitigate stupid. Even though they only need one minute of heat the microwave is capable of launching an hour of heat. They may be able to train their own kids to just dial one minute’s worth but they cannot train their kid's friends.

Whenever my company gets around potential flammability the default position is that if it can burn it will burn, hence the need to control ability to burn. As a side note we are about to remodel another kitchen. This one has a wooden hood enclosure about 28 inches above burner. Local fire code requires 30 inches clearance to combustibles. This lady was cooking a meal that she doesn't ordinarily cook in a cast iron frying pan. She pre-warmed the pan and got distracted. When she poured some wine into the pan that her recipe asked for the alcohol content produces a flash flame that scorched the cabinets above.


From contributor M:
I'm with Contributor F. I can't see resetting the power every time it's used. Nor do I feel comfortable placing a microwave on a sliding platform. Opening the doors on those things sometimes cause them to slide around. I'd pass on this option. Why not just advise them to have an opening in the cabinet with the micro freely accessible (perhaps a pocket or tambor door)?

Also - definitely leave it up to a licensed electrician (though I've heard of states that don't require electricians to be licensed). Those closet light switches probably would not handle a 20 amp appliance (I believe most microwaves require 20 amp circuits). Let the experts give the nod/shake on that chore!


From contributor H:
Put the outlet on a timer. It’s easy to do and not expensive and has a positive shut off. A 15 minute one should be about right.

From contributor Z:
I once had a client that put her microwave behind a door in a tall storage unit against my advice. I asked her to sign off on her decision and kept a copy of the letter warning her against it. Her eight year old put some pop tarts in for four minutes, closed the cabinet door and the kitchen burned down. It’s probably against code.