Question
I have a laminate counter to lay up that will have a 1" strip of black laminate 2" back from the front edge of the counter. The rest of the laminate on the counter is a beige color. The counter runs wall to wall, so there is no need to return the strip to the back on either of the ends. I'm wondering what the best way to do this is. I'm thinking of drawing the layout on the substrate, routing a clean edge on each of the pieces of laminate before sticking them, gluing everything, then applying the laminate following the layout lines. I could also lay the top up entirely in beige, then rout a slot for the black strip to sit in, but I can't imagine that I could rip or rout a strip that would fit exactly in the slot. Any suggestions would be appreciated.

Forum Responses
(Laminate and Solid Surface Forum)
From contributor D:
This isn't as difficult as it's going to sound, but it will give you the tightest seams your project demands. The method I would use would be mirror match seaming. It's primarily used for seaming solid surfacing materials. It works great on plastic laminates too. The idea is to cut both pieces of material at the same time using one common straight edge. The straighter the straight edge, the better, but there is room for some very minor deviations from straight in certain applications. Your top would not be one of them.

Assuming that you're using standard grade laminate, as opposed to post forming or vertical grades, and that both the beige and black are coming from the same manufacturer, you should have no problems with the laminate being out of flush when you finish.

First, you will need to come up with a backer board of some type to lay the laminates on for the seam cutting process. A piece of 1/2" or 3/4" particleboard or MDF works fine. Plywood would be my last choice due to the softness of the surface. I usually cut it 12" wide or so by whatever the length of my plastic is plus a couple of inches. You'll also need one straight edge, 5" wide by the length of your plastic plus a couple of inches again. I like to cut a second piece of material of the same thickness to use as a hold down for the second piece of plastic.

As far as tooling goes, you'll need a router or laminate trimmer. I prefer a router with a 1" template guide on the base plate and a 1/2" diameter double fluted, straight, carbide tipped router bit.

Draw a center line down the length of your backer board. This is for visual reference only. Lay your beige piece of plastic down along this line and place one of the 5" wide straight edges on top of it, 1" or so back from the edge and clamp it into place. Next, lay a piece of the black lam against the edge of the beige lam you just clamped into place. Keep the black piece of lam as wide as you can at this point. Lay your other straight edge on top of the black lam 1/2" from the seam where the two pieces of lam meet.

Now mark the two pieces of lam with reference lines. You'll want to have those two points meet when you seam it together. Unclamp the two pieces of laminate and put the slightest break on the bottom edge of the two pieces where they will meet. You should be able to remove the fuzz if there is any from the top edge of the piece of laminate using your fingernail. Pull the two pieces of lam together using a couple pieces of masking tape to see how much tighter your seam will be. If it looks good, take the black piece of laminate and rip it to 1-1/4" wide, using extreme care to not nick or damage the routed edge. Now cross tape the two pieces together using masking tape every 2" or so. 1" masking tape works great for this. Then over the cross taping, run a strip of tape on top of the seam. For the second seam, clamp the beige/black piece of lam to the backer board. Use the other side of the board for this, since you want to have a flat surface under the lam. When you clamp this piece down, set the straight edge 3/4" from the taped seam. With the template guide/router bit offset, this will give you a 1" wide strip. Be exact in your placement of the straight edge, since your router will follow this edge. Now clamp the beige piece into place with the second straight edge 1-1/2" or so away from the first straight edge. If it all looks good, go ahead and rout this seam using the same method you routed the first seam with. Mark a reference line, test fit it together, rip it to 1-1/4", break the bottom edge of the two pieces, and then cross tape it to the black/beige piece. Now all you have to do is spray it and lay it using a slip sheet or lay-up sticks to give you the ability to position it in such a way that your tolerances will be met.

As far as taping the pieces together, I'd do it like I described. If I were seaming two pieces together for a long run of top, I'd spray them as separate pieces and lay them freehand instead of taping them together for ease of handling. Always make sure that there is no glue on the edge of the seam. Glue has thickness and thickness will always get in the way of a tight seam.

Sorry for the long winded reply, but how else could I say it? Once you do a practice seam or two, you'll see how easy it is to do.


From contributor A:
We follow contributor D’s instructions also, but we use a router with a D- base plate on it. I don’t know if you can buy these. It is just a half inch thick piece of solid surface in the shape of a D, so you have one flat edge to run along your straight edge. Works really well. Plus we use strapping tape (the one with the strings in it) instead of masking tape - doesn’t have as much give to it. Helps to make a tighter joint if you’re applying both pieces at once.

From contributor D:
The D base router plate would work well for that application. One of the reasons I use straight edges and template guides is to keep the base plate of the router off of the laminate. I've had a few occasions where I've put scratches into the laminate due to an errant burr or nick in a base plate. Round base plates are my favorite, though, due to the fact that if the base plate is concentric and centered on the router arbor, then if you rotate the router during the cut, it should have no appreciable difference on the quality of the cut. With a D base plate bearing on a fence, any rotation, however small, will result in a redo. I've worked with both and the round base is just a personal preference.

Strapping tape works okay as far as holding strength goes. I like masking tape due to the stretch factor that you mentioned. I seem to be able to pull the first piece tighter to the second piece by first anchoring the tape to the first piece and then as I pull the tape tight and see it stretch, that's when I apply it to the second piece. Haven't had any problems with it. The strapping tape was always a lot messier of a cleanup, too. 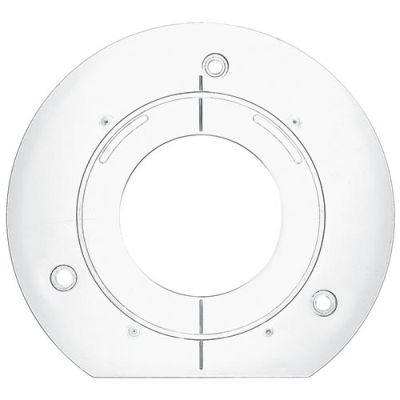 From the original questioner:
Thanks very much for the responses; I'll give it a go.