Unusual tables milled from whole logs present an interesting stain and finish problem, besides the obvious moisture-related movement concerns. May 23, 2007

Question
I recently made for a client these two solid walnut end tables. I am finishing them with tung oil and I am finding that the end grain tops, not surprisingly, are turning out much darker than the sides. I would like to lighten up the top end grain to match the sides as much as possible.

I sanded the entire pieces up to 150 grit, then applied six coats of tung oil, sanding with steel wool between coats. I think I should have sanded the end grain tops up to at least 220. Should I do that now and begin reapplying the tung oil? Would that help make the colour lighter?

Also, the end grain tops seem to have a light white shadow in certain areas. You can see this in the picture. Any ideas what caused this and how to avoid it? I wholeheartedly admit that finishing has always been my weakness. That is why I am seeking your advice on this problem! 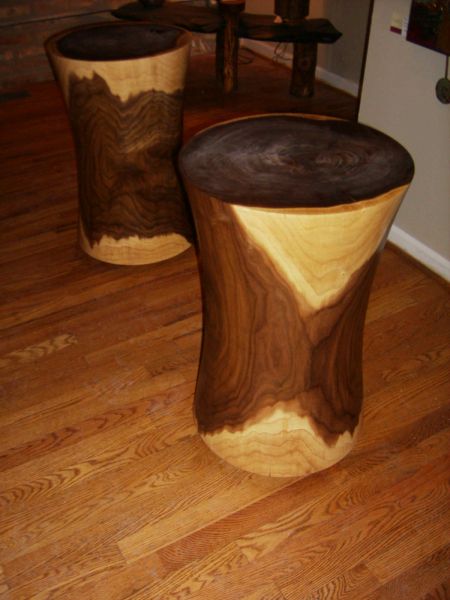 Forum Responses
(Finishing Forum)
From contributor J:
I'm not sure about the white shadow, but you might try sealing the end grain with several coats of shellac before oiling, to reduce oil absorption.


From contributor C:
It looks like you have made these tables of solid logs and the white cloudy areas are almost surely moisture trapped beneath the finish. You'll need to sand the finish back off (after the lumber dries) and start over.

Under normal conditions, you will need at least ten years of seasoning before your tables are ready to refinish (this is part of the reason you never see tables made in this way). The rest of the story is that the logs are likely to split and crack significantly by the time that they are dried. Leaving the finish on the end grain to slow the drying process there will help to limit these problems, but is unlikely to eliminate them.

From the original questioner:
The client is fully aware of the potential checking of the piece over time (or in the here and now). I bored four 1.5" diameter holes 20" deep into the piece from the underside to hopefully alleviate the checking issue a bit. Nonetheless, he was intent on having these pieces made from solid walnut, knowing there would be checking over time.

So, would it be possible to sand off the top coats of tung oil, apply a couple coats of shellac, and then reapply the tung oil? Would this decrease the deepness of the brown and make it more closely match up to the sides?


From contributor J:
It was just a lead on a potential solution, an instinct, because I haven't done anything quite like that. It wouldn't surprise me if the oil has penetrated rather deeply, in which case it would take more than sanding to take it off. You could experiment on some scrap to see whether it's worth it.

From contributor K:
I think you are right on the money on the end grain - you didn't sand fine enough. That end grain is like the end of a straw broom, and those fibers really look best if they are sheared off, as with a plane. Sandpaper only abrades them. Wood tech guys might disagree, but I wonder if they don’t microscopically resemble split ends in hair after being roughed up with 150. Anyway, my experience is, to get that cloudy appearance out of the end grain, if you don’t want to plane it, you have to sand it as finely as possible. I’d use a 6 inch random orbit sander, like a PC or Festool, start with 100, and work up to 320. Don’t skip grits. I think you’ll be amazed at how it looks even at 220. I know starting with 100 sounds coarse, but the 100 won't clog up as fast as, say, 150. Not really that much work – maybe an hour between them. The hardest part is keeping the dang things steady, I would think.

Of course, you couldn’t do that if you were spraying lacquer, as the lacquer wouldn’t adhere to what will be a nearly burnished surface. But you’re hand-rubbing, and doing end grain, so adhesion won’t be an issue.


From the original questioner:
Thanks. I think I will try your suggestion. I will start with 100 and work up to 320. My 6" orbital is a Black and Decker (I know, not very good quality), but hopefully it will do the job. Do you think it will help lighten up the shade of the walnut as well as take out the shadow? After six coats, I'm worried that the oil has soaked in that end grain so far that I might be stuck with that darker colour. Your thoughts?

From contributor B:
Yeah, it has soaked in for sure… Just think of end grain as being a straw or sponge - just sucks it up. How far depends on quantity applied and porosity.

From contributor I:
You might want to start with a belt sander and 80 grit before switching to the R/O sander and the above schedule. Since it's solid, that's what I would do. It's going to be tough to get the soaked in oil out...

From contributor D:
How's about trimming a half inch or so off the top...

From contributor K:
I wouldn’t get too freaked out by how dark the end grain is, or is going to be. The end grain is always darker – partly optical, and partly what contributor B said. Shoot, if you splash naphtha on it, it’ll get darker. All that sapwood is going to make it seem darker still. The main thing is to get that end grain to pop, in order to show the depth and texture which you can only see in end grain. The only way to do that is to shear it, or come as close to shearing it as possible.

It could be that the brand of tung oil (search this site for discussions on this subject; some very knowledgeable folks have shared some good stuff) you are using is more amber than some others – you might do some testing. But I think that at this point, in this application, it’s moot. Get sanding and get paid!

I didn’t mean to suggest that PC or Festool are the only sanders which can get the job done for you. I personally like the right angle style. I do believe that it’s easier to do excellent work with excellent tools, but I’ve seen too many guys do amazing things with bear skins and flint knives over the years to get too snobby.


From the original questioner:
Yes, I agree. At this point, I am simply going to accept the fact that the oil has penetrated too far and the tops are going to be darker than the sides. I am going to do the sanding tomorrow and then begin reapplying the tung oil. I am using Minwax, which isn't pure tung oil, but has the additives to quicken the drying, which I like. I know it isn't the most respected oil, but it serves me fine (after all, the sides of the piece look great, I think).

I don't think I'm going to take off a half inch simply because when I lathed the pieces, I worked pretty hard at making the curves perfectly symmetric and I don't want to lose that nice even curve. Otherwise I would take your suggestion. Thank you all for your input.


From contributor E:
By the way, those tables look awesome regardless. Where are you located?

From the original questioner:
Thanks. It always feels good to get a compliment on my work. I'm located in the Chicago area.

From contributor R:
If the log is wet enough to cloud the finish, I sure wouldn't want it sitting on the hardwood floor. It wouldn't be much fun paying to have the warped stock replaced. Better get it off the floor and on some spacers to let air get in there.

From the original questioner:
They aren't on the floor - they are on spacers.