Here's a look at a shop-rigged dust control modification to a Holz-Her CNC: a blower that drives fine MDF dust out of the cut grooves so that the dust collector can grab it.October 16, 2012

Question
I just wanted to share a fix I have developed for our Holz-Her 7516 Dynestic. As I'm sure like many of you we had problems with dust not being picked up by dust collection. This was at its worse when cutting MDF and cutting all the way through to the spoil board. The MDF is so fine it packs in tight. Then once you cut through the sheet you have the table vacuum holding it in the groove.

A few pictures are below of how I helped improve the problem by about 50%. It is still in the rough stages and will need some fine tuning, but I don't have time for that right now. This uses compressed air to blow the dust up so it can be picked up by our dust collection. Remember this was built for our machine but the idea could be copied to just about any I would think. I do not run the CNC, I only work on it, so keep that in mind when asking questions as I don't know anything about running it. 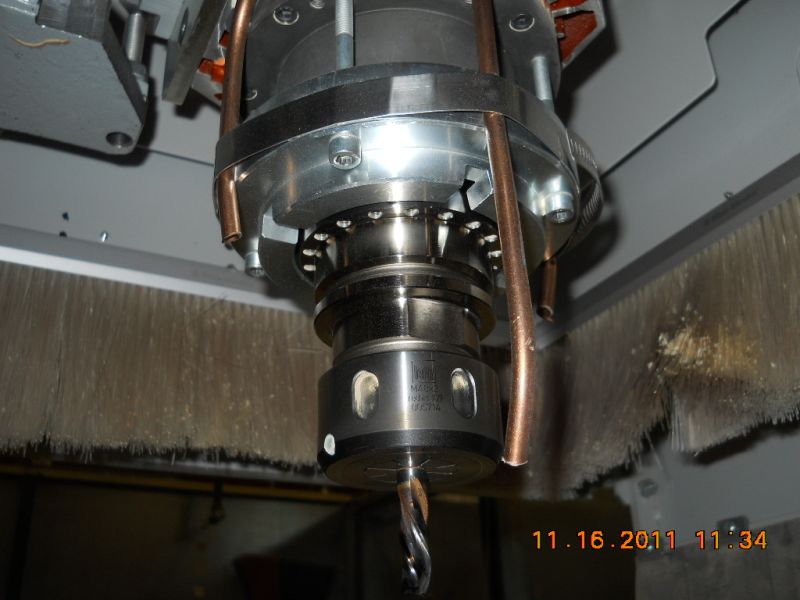 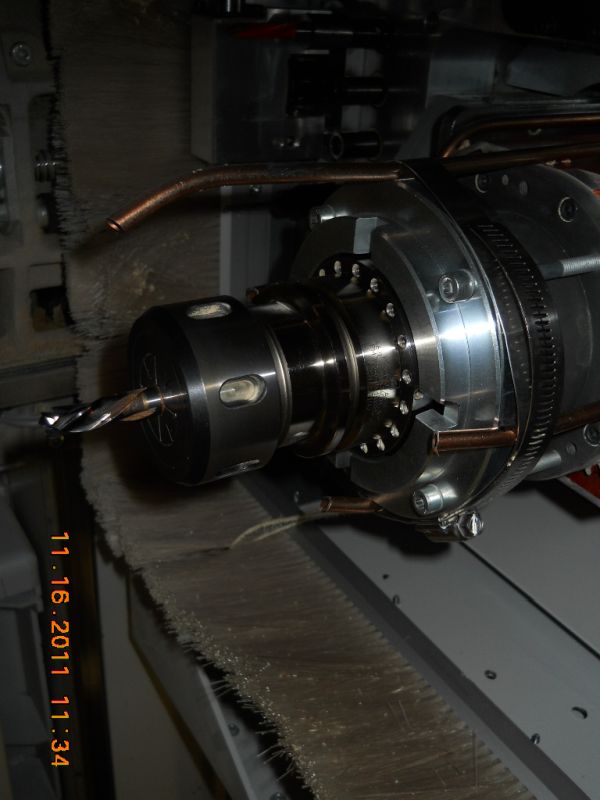 Forum Responses
(CNC Forum)
From contributor M:
Pretty slick! I have thought about doing this sort of thing to my 7120. Omnitech has a similar arrangement on their routers but one location only (if I recall correctly). I tried focusing the blast on the Omnitech with a plastic articulating joint but it moved around too much. It seems you have solved this by using four fixed locations, a good idea I think.

A few questions: Are you drawing air from a new line you snaked through the system and if so, what diameter? Is the air blast actuated by code or is it actuated when the dust cover is lowered, or something else?

I have been primarily using tooling strategy to control dust, but that is very application specific, what works for me in a medium volume nesting environment will not work for everyone.


From the original questioner:
I did run a new (dedicated) line through the track (3/8"). I’m not sure if the 3/8" is big enough or not. This was something I threw together and if I was going to get serious I would see what size I would need to support the 4 -1/4" fixed tubes. I have two valves that are pneumatically operated and the control comes from the air cylinder that moves the spindle up and down so whenever it’s in the up position it shuts off. The current set up seems to blow fairly hard but I'm sure this setup could be tweaked to improve it considerably. The biggest problem is having to keep the three fixed tubes raised up so they will clear the tool changer. They don't work nearly as well as the longer one. There are a few things I will change as I get time.

From contributor M:
I also found that the air had to be focused near the groove for it to work well. It needed to be blowing nearly directly into the groove after the cut was made. Your long tube works best and the flexible plastic ones I used worked great while they remained focused but not after they got knocked about.

So just thinking out loud, your machine may be different, and there may be other things I am missing, but there are two hoods on my machine - an inner hood for dust collection and an outer hood for safety. The inner hood has several positions it can ride in depending on the length of the bit. So though the z distance from the work surface can change some from thickness to thickness, but it is not radical while in position one, and mostly this is for 1/2 to 1" material.

It seems on this machine the air nozzles may possibly work better if they are attached to the dust hood rather than the spindle. This way you could get them all four within say three inches of the tip of the bit and not have to concern yourself with the tool changer. Maybe tack welding a small triangular tab to the inner surface of the hood horizontally in line with the spindle could work (if you are not spinning any large aggregates that is). I would also bet that air volume is less important than velocity. In other words, maybe you can use a lot less air if you have a nozzle of some sort on each tube to really stir up a good vortex. I think you are onto a pretty good idea here.


From contributor D:
There are fixtures you can buy off the shelf too from industrial supply houses that are made for this sort of thing, especially for snaking around dust hoods and things. The ones in our shop are on saws where oil is misted in and sprayed on bandsaw blades. They look like plastic beads with a nozzle at the end. They can zig and zag and be tightened to hold a certain position.

Plastic also has the advantage that in the event of a crash or it shakes off, it will get cut by the router with relatively little fear of damage, either to the machine or the part you're machining. I find it very rewarding to modify a stock machine to work better for my particular situation. Doing this kind of thing isn't for everyone, I know, especially when you're still under factory warranty.