Based on that gnarly knot and the back story, it's most likely Eastern White Pine. July 11, 2013

Question
I have some wood that I could buy from a friend. It’s the flooring to an old building that was built in the 1850's. I am having trouble figuring out what type of wood it is. It looks like Douglas fir, but someone suggested heart pine. Below are pictures of the wood after I ran it through the planer. What is the going rate per board foot? 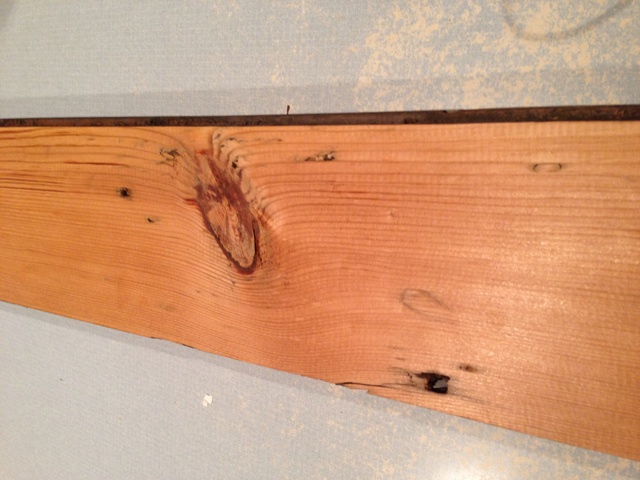 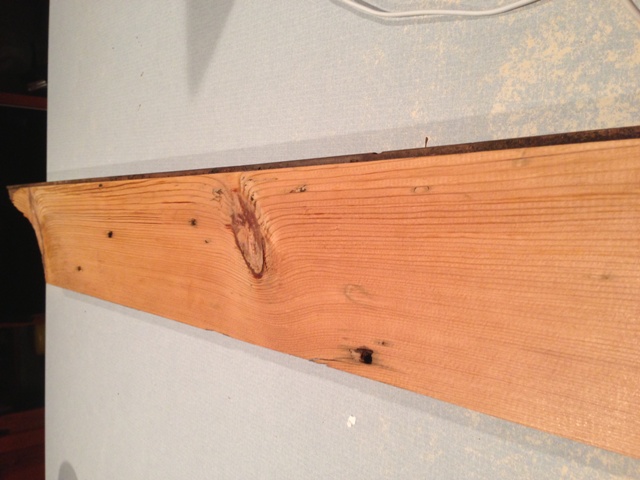 
From contributor K:
It could be either. It’s hard to tell from the pictures. One way to tell between pine and Douglas fir is by the smell. Pine will smell very similar to turpentine. Douglas fir will have a sweet smell. It could also be cedar, and in that case it would smell like #2 pencils.

From contributor R:
My vote is for Douglas fir, but on a rift or quartersawn piece like that it's harder to tell. Heart pine doesn't feel very slick to the hand. That stuff was loaded with pitch. Also hard pine has a broader color difference from early to late growth wood.

From the original questioner:
I tried the smell test and the piece just smelled musty. That's what makes me think it’s Douglas fir and not heart pine. I saw some of the beams the flooring came off and they were all oak. Also being up here in Wisconsin I don't know if we have much heart pine used in the old buildings. Does anyone else have any ideas?

From contributor K:
If I'm not mistaken Doug fir is much more common to the western united states and I'm certain that in the 1850's pine was a very common species in Wisconsin. Contributor R's comment about color difference likely wouldn't be as pronounced in slower growing old growth lumber like we're discussing. I'd put money on pine.

From contributor J:
I could swear that is eastern white pine except for the reddish color. That greasy old knot really looks like pine.

From the original questioner:
I am going eastern white pine as the species, it just makes sense. I don’t think it’s worth $1.50 a board foot being that I would have to tear off from the floor, and it seems to be covered in coal dust.

From contributor I:
My vote is for pine. It’s definitely not cedar.