Evaluating a Down Oregon White Oak

Sawyers advise a colleague on how to assess the quality of lumber he's likely to get from a White Oak that has been on the ground for two years. July 10, 2007

Question
I am setting up a job sawing white oak for a customer who has had a large tree down on the ground for two years. I took a 16 inch limb and did a few test cuts. The wood sawed okay, with MC at 30%, but I observed fairly brittle boards. Dropping the scrap on the ground would cause it to break. Is there a situation that would explain this effect?

Forum Responses
(Sawing and Drying Forum)
From contributor J:
Without seeing the wood, and knowing only that it had been on the ground for 2 years, I might guess rot. Are there any signs in the wood such as spalting or the odor of a bacterial infection?


From contributor T:
Are you sawing limbs for your customer? That isn't a great idea, for limbs hold tension wood. If this is just a sample, the limb wood is going to rot faster that the log itself just because of its position on the tree and considering it has been down for two years. Have you cut into the end grain to see what the log interior may hold? I don't know what moisture meter you have, but most models max out at 30%. If so, the log may be considerably higher. I don't know how much Oregon white oak varies from northeastern white oak, but around here if it's brittle, it's rotting.

From the original questioner:
Thanks for the info. I did not smell anything other than the smell of oak. I have viewed the interior of the log by cutting with a chainsaw. It looked okay to me, however I would say the color was darker than I had expected, almost chocolate. What kind of test can I do on the main logs/trunk (the limb was just a test cut)?

From Professor Gene Wengert, forum technical advisor:
Sounds like brown rot to me too.

From contributor T:
Chocolate in color?! Sounds very rotten! Not all rots are going to smell. Especially in this cold weather. Is the log frozen? Are you mistaking dark colored frozen wood for solid wood? I have seen many rotten spots that filled with water and froze.

From the original questioner:
Here is a picture. It is a 2X3 inch board that did break after I jumped on it. One of the two halves I ran water over so you could see it better. The brown rot area smells like earth. I also tried to snap the end off by banging the board over a concrete step. It did hold. My earlier observation was of scrap parts that the thickness reduced to zero based on the type of saw cut. Those parts seem to blow apart with no "rot" (per what is shown in the picture) present and very little force by me (like just dropping them on the ground). What else should I try? 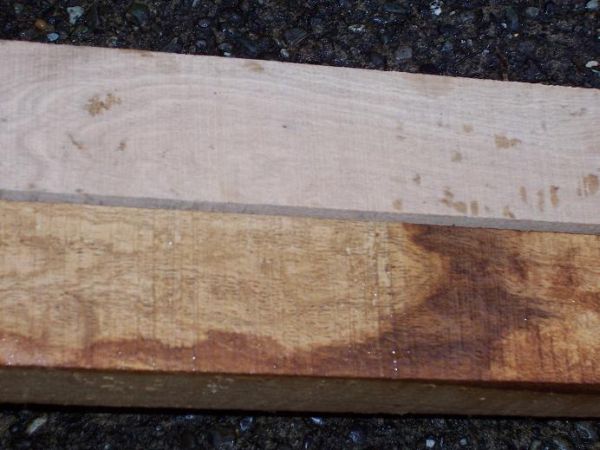 
From contributor K:
When you say limb, this leaves a lot of variables up in the air. Sorry for the pun. Trunks can branch and remain fairly straight up with little change in cell structure. However, if you are talking about a horizontal member, there is likely to be a lot of change.

As you may already know, in most hardwoods, the pith will be nearer the top of the limb, the more it becomes horizontal. In this circumstance, there is likely to be a lot of reaction wood, which is prone to being brash.

Could you go into more detail about the limb, and maybe post photos that show that which broke? Compression wood will normally lack any luster, and is likely to fuzz when cut, and will surely break abruptly as you have described.

The dark streak in the picture has an appearance similar to severe bacterial infection. Did you notice any shake? Was the odor particularly strong?


From contributor G:
Is lumber still useable when it has bacterial infection?

From Professor Gene Wengert, forum technical advisor:
It is weaker than normal and often has a foul odor that will return after drying. Plus it has a brown discoloration that will exude over time through a finish. Answer: Probably not useable.

From the original questioner:
This was a horizontal limb. I take it from what you wrote that the wood in tension will be weaker. That would be the wood over the pith. That could explain why some of the scraps which looked and smell good, seem to be brittle.

I did not determine the source of the wood when I cut it - I just set it up to provide some good boards and verify that my sawmill setup was good; all done as a test. I assume that limbs are not cut, or at least the top side?


From contributor T:
No, not just the wood over the pith. All branch/limb wood has more tension to release than logs from the trunk. You don't want to waste your time sawing wood from branches. An exception may be when a tree doubles or triples at its base or right after the first cut log. Even these logs will tend to release tension off the saw, but typically enough that you can deal with. All species are different. Oak is one to release a lot of tension. If a log is full of tension, you will usually know while you are cutting it. It may pinch the blade, but more often the board being cut will rise, sometimes a matter of inches. These boards could also be brittle because of the grain direction. If the grain curves drastically, the grain can break with it. Can you post a picture or two of where the wood broke?

From the original questioner:
I didn't find much wood left. It does look like the grain is moving. These parts were near the end of the limb. As before, I put water on them to help show the grain. 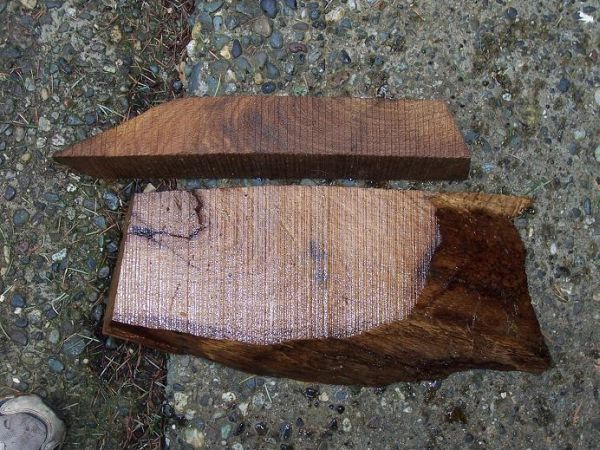 
From contributor T:
This is definitely a problem due to grain direction in this photo. This is common around large knots or limbs. Is the wood that dark when it is dry on the surface, and not wet down with water? Does the rest of the wood you cut from this log appear the same?

From contributor R:
I have sawn quite a bit of white oak, and if you saw just the trunks and leave the branches and limbs alone, you should have good luck. There are fence posts here in southern Oregon that were split and sunk into the ground over a hundred years ago and they are still sound as the pound. You might get some waste, but there will be plenty of good wood, I reckon. I cut some that had been down for five years, had funk and mushrooms growing all over it, and it came out beautiful. Oregon white oak is great stuff, but I would recommend cutting it thicker that you need, as it will move during drying.