Question
I am working on an entertainment center for a client. We want to incorporate two 1/2 round columns on each side, approximately 45" - 55" tall, maybe 5 - 6 inches wide. I have not done much veneer work. I was wondering if anyone knows if a bendable veneered oak plywood is available or has any ideas on an efficient way to accomplish this.

Forum Responses
(Architectural Woodworking Forum)
From contributor D:
Wood columns are traditionally stave built (think barrel), turned and sawn in two for halves. At 5" the column could be solid, but you usually get better grain control/presentation when gluing up staves.

If you have not glued up stave construction before, don't shy away from it. Even tapers don't complicate things too much. Do a little research - Fine Woodworking has had articles on stave built columns.

We like to do them with carefully sawn bevels, and a 1/8" kerf and spline for alignment when gluing. We use strap clamps for glue up, but I hear that shrink wrap also works. Yellow extended glue will give you time to get it all together. Draw the cross sections full size so you can visualize the parts and their sizes, bevel some scraps, cut them 3" long and clamp them up to test your joints.

Most will suggest the 21st century solution - outsource. But someone has to make them, why not you?


From the original questioner:
Thanks for taking the time to offer up such an in depth tutorial! I appreciate it, and will try that technique on a future project. I decided to go with bendable substrate and veneer for this one.

From contributor L:
I just did some 1/2 posts. I glued 3 pieces, then paper, then 3 more pieces. When done, I took a chisel and easily split the turning to give me identical pieces.

From contributor C:
If you're veneering the columns in a vacuum bag, make sure you shape the form like an inverted "U" and not a true semi-circle. You'll need the additional leverage to get the bending plywood tight around the form.

As for stave construction, we have had great success gluing up columns in the vacuum bag. Masking tape temporarily holds the staves together. Place a board - which is the length of the column and slightly narrower than a stave - on the platen and the column on top of the board. Seal the bag and turn on the pump. Even without splines, the column holds together without slipping.


From contributor D:
I have wondered about the vacuum bag for stave columns. I'm glad you posted your experience. I have wanted to try it for years, but didn't want to risk a bunch of nice work. I thought it might collapse, but logic says it should equalize and just clamp tight.

From contributor M:
I hate to outsource anything. These columns were made on a Legacy Mill out of oak boards glued up solid. 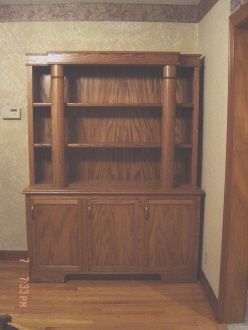 From contributor R:
Columns of this size could definitely be turned from solid wood, eliminating the labor of coopering them. We just did 6 10 foot long baseball bats, to scale out of poplar. I had to find a guy with a 10 foot lathe, so we sort of half outsourced them.

From contributor C:
Addendum to gluing up stave columns in a vacuum bag: Make sure the platen is no wider than the column's diameter. If the platen is too wide, it can snap as the vacuum increases.

From contributor H:
I'd recommend milling your columns on a W&H. If they're too large for one piece construction, you can book two or more pieces after milling.