A discussion of the risks involved with solid wood door construction, and some detailed advice on "plank construction" methods. January 12, 2009

Question
I've a client that wants solid wood interior doors for a large closet. Three doors, each 27" x 80". Not frame and panel. I'm working with 6/4 Bolivian walnut (Juglans neotropical), flat sawn, MC @ 8-10%. Given where I am, Mexico City, I figure my tangential movement is 0.6" at the most. I can live with that.

What might be the best construction? I've been thinking of resawing and a 3-ply, each of 9mm. The boards are 6-9" wide. I haven't resawn any of them yet. I would reverse the grain in glue-up. And depending on how they cured after resawing, I might have to glue up boards that are 4-6" wide. I'd like to avoid breadboard ends.

Forum Responses
(Architectural Woodworking Forum)
From contributor C:
Just joint the planks carefully, and edge glue them together. The main purpose of frame and panel construction is to minimize the effect of expansion and contraction across wide expanses of wood panels. If, as you have said, the expansion is not a problem, then there is no need for 3-ply construction, grain flipping, or any other nonsense. That said, there are some who might consider a gap of 5/8" or more to be a tad bit unsightly.


From the original questioner:
Thanks. I agree about a 5/8" gap being a tad unsightly. I'm imagining a worst-case scenario given our weird changing weather patterns. Historically, our climate is very benign and I think the movement would be considerably less.

Another question: the client now wants solid wood interior passage doors of the same material. I thought the best approach to this would be edge-gluing and inserting five 3/8" threaded rods horizontally to restrict the movement. What is your take on this approach? It has been suggested that I do it in a manner that is common here for this type of door, which is a 6-8" board half-lapped horizontally top and bottom. Sometimes only glue is used, other times it's screwed. This doesn't seem it would hold up, and I will not go this approach.


From contributor C:
Skip the rods. They aren't going to work like you think they will. You can't restrain wood movement like that. The end result will be as the wood tries to expand, the internal fibers will compress, and crush (fighting against the rods). The first season, all will seem well. Then, as the wood begins to shrink (due to dropping moisture content), it will shrink smaller than it was when assembled (and smaller than it would have been originally). I apologize if that seems unclear, but... you are on the wrong track with the rods.

Instead, maybe shiplap, or tongue and groove the individual boards (loose spline perhaps), with horizontal battens (either top and bottom boards, or fastened directly to one side of the door. This will allow the expansion and contraction to be maintained in smaller amounts on each board, and greatly reduce the net dimensional change of the door. Doors of this style were often built dead-nailed (fastened through, and bent on the far side) wherein the wood would expand and contract around the nails, yet not loosen appreciatively due to the fact that the bent-over nail provided a friction connection between the batten and vertical planks.

Unfortunately, this type of construction provides very little torsional rigidity, nor much racking resistance, so a z-bar would need to be included.

All in all, you would be far better off to construct a door sub-frame, which has torsional and racking resistance designed into it (think torsion box or stile and rail), with the vertical planks applied as an appliqué skin


From contributor D:
I don't think your customer knows what they are requesting. Pure conjecture since I don't know the facts, but the exterior work is doomed and the interior work will be marginally, if ever, successful. There is a reason why one never sees doors built this way except in cartoons. They don't work.

With the exterior, how will a latch work? Locking? What about weather seal/strip? What will keep the door flat with temperature and humidity different on each side of the door for its entire life? Exposing a piece of solid wood to different RH on each side is a prescription for warping - there is no better way to do so if one wants to do it intentionally.

Why is a customer telling you how to build doors - aren't you the expert? Or is it your inexperience with his request that is allowing you to get involved in this? This is all none of my business, of course, but beyond the "do what the customer orders vs do what you know is right/sell what you make" argument is the question of liability, reputation, and plain old wasted time and material.

Having stated all this, there are ways to get a door that is solid wood and looks like planks or a flush door, but is stable and usable. Not easy, depending upon the details of the look your customer wants, but doable. If you can post an image of the doors, I can better see what can or can't be done, within the limits of good craft.

As for the threaded rods, let's look at it logically: Wood will expand and contract with changes in RH - period. Threaded rods will "restrict" expansion. Wood will still absorb moisture and swell, compressing the fibers all around the ends of the rods. Wood will then dry out, and shrink. The compression set at the rods will cause them to loosen, with resulting sag, rattle or worse.

Remember, wood wedges were used to quarry billions of tons of stone by the so-called primitive technology of driving dry wedges into holes, then wetting them so they expand. The stone does not stop the expansion, and the stone gives way to the expansion of the wood.


From the original questioner:
Thanks. Yes, I've no experience with building solid doors. I've built a good reputation via word of mouth, and I don't want to lose it with these doors. Hence my coming to WOODWEB. The doors in question are part of a project wherein I’m doing the built-ins for a new apartment, a lot of it being solid nogal (walnut), walnut faced ply, walnut over MDF, and walnut veneer.

Fortunately, the doors in question are all interior passage doors, so I’ve not the worry that comes with exterior doors. I cannot use the walnut-faced ply, as the client does not like the rotary cut or the Q/S look. Veneer is not a consideration for the 1mm veneer that is available here. The threaded rod idea came out of my research as an approach, and yes, I do remember how wood was used to quarry stone.

The client wants a door with a flat surface, no battens, not frame and pane; vertical uninterrupted pieces not less than four inches wide. I’ve 6/4 material up to 9” wide and between my bandsaw and planer I can take it down to 3mm.


From contributor J:
My suggestion for that type of door would be to resaw your wide planks to 1/4", plane them down to 1/8-3/16". Next press two layers of 5/8 MDF together, edgeband in solid, press your faces with your sawn veneer. You could even buy a cheap solid core door at the big box store and rip it down, add your own edges, and then press your new faces.

You just need to tell your client that solid wood doors like what they want are destined for failure, and they are not commercially available like that for good reasons and explain them to him. I'm sure he doesn't want a bunch of doors that won't last two years.


From the original questioner:
Thanks. The question I've had in the back of my mind is: at what point (what thickness) does one not worry about tangential movement? At what point will glue restrict this movement? Is it 1/8", 1/4", 3/8"? Obviously, it depends on the species of the wood. Hoadley says 6.4 to 7.8% between European walnut and American black walnut at .64 spec. density. W. Lincoln specifically states S. American walnut at 0.65. Maybe I'm overthinking this.

From contributor D:
As I understand it, you need to make what we call a plank door. There are precious few standards, so names are a bit loose. A plank door is typically all vertical members on both sides, running full height. Usually the planks/boards are separated by a v-joint, and this is often a tongue and groove.

Sometimes these doors are only one ply thick (say from 3/4" to 1-3/4"), and have a z or x brace on one or both sides. This is a primitive/rustic look, with the function of triangulating the separate pieces and keeping them from sagging. Other times they are up to 3" thick, with no visible bracing, and are more like a "castle" door - as they are sometimes called. Small or large windows can be added, arches, etc.

The trick is to put the two board faces/planks on a stable core. One responder suggests MDF - and it is stable. We have researched these doors and found the oldest and best ones have a mortise and tenon frame in the center - two full length stiles, 4-6" wide, with several cross rails - 4-7 pieces. This provides rigidity, from the length of the tenons (2-1/2 to 3"). The width of all these tenons is where the rigidity originates. The two faces are glued on and reinforce/triangulate (of sorts) the core and it all works together to stay straight and flat. We avoid MDF since it has a hard time supporting its own weight, and is not wood. We also do not want the MDF showing at the edges, and a solid core gives a good look and screw holding for hinges and latches.
This core - or ladder frame as we sometimes call it - is what limits the expansion of the door and reduced cross grain expansion to the two stiles, just like a conventional frame and panel door.

The planks must be located with a gap to accommodate some swelling. Tapered v-joints can crush when expanding (the crush alleviates the pressure and isolates the swell at the v-joint), but you still want to give it some room. We space 1/16" on exterior doors. These boards are all glued on to the core, and pressed in a dead flat press.

Even if you use a nailed z brace, you need to give the boards some room. Theory is that all KD wood (in our neck of the woods) is 6-8%, and will only gain MC from there. Could go up to 10% or even 12%, with no adverse effects - as long as there is a gap. It will not shrink from the time of fabrication. These are observations from my climate - yours may differ, but the underlying behaviors are the same.

The thickness now becomes a problem. We like 3 plies of 3/4", for a 2-1/4" thick exterior door. Interior, we can do the t&g at around 5/8", and the core at 1/2" thick. You must have jointed flat stock that wants to stay flat on its own to get a flat door. Forcing a bend out or opposing bends is risky. Both faces should be the same thickness (and species?) to preserve balance.

I think doors in general, and plank doors specifically, are, like many things, more complicated than they look. A simple plank door is not so simple, but if it functions seamlessly and has the look people want, then it is a complete success and even more appreciated by those of us engaged in and aware of the fabrication. Your reputation will grow (the way you want), and the door will not.

Here is an image of a plank door in teak, with speakeasy window and half round arch top. 2-1/4" thick, with insulated voids in the core frame. 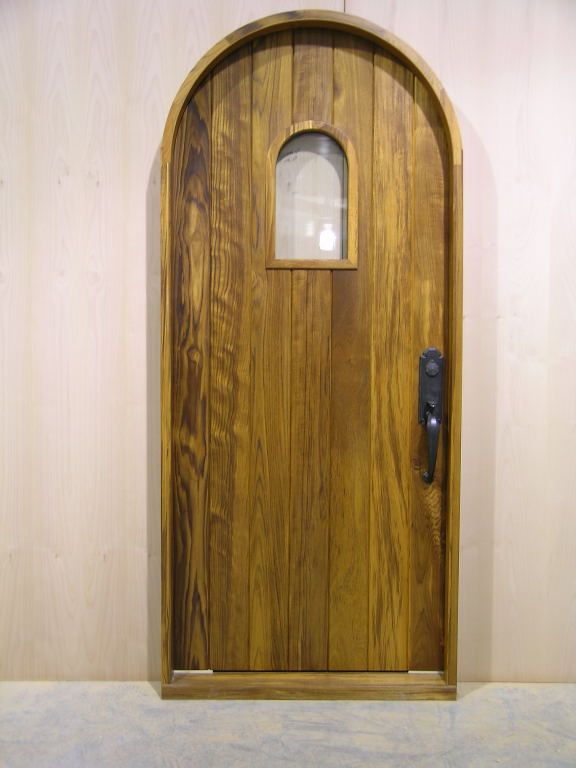