Question
I have worked with many highly figured woods over the years, especially curly maple, but this example really astounded me. I have never seen such a neon look. Can anyone tell from the picture what kind of wood it is? I have an idea, but I have no good basis for comparison. 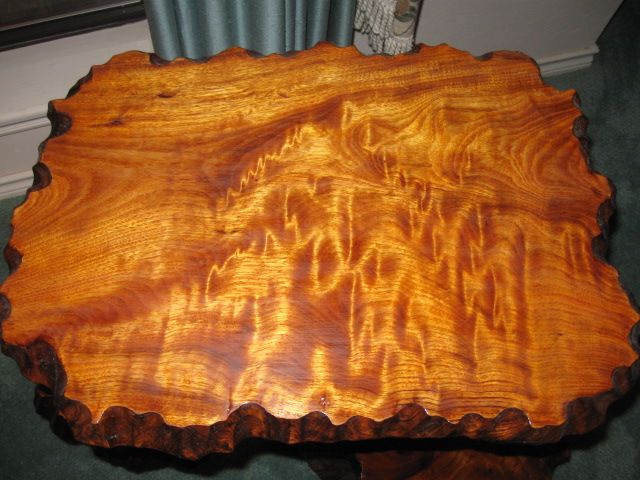 Forum Responses
(Furniture Making Forum)
From contributor W:
It is a ring porous hardwood, not too naturally dark in color. It has a walnut look to it, but the color is wrong. My first impression is sassafras.

From contributor A:
How about butternut?

From contributor N:
Is there a finish on it? If so, I think butternut. If not, the color is different than any of the previously mentioned... not much help.

From contributor W:
I agree with the other posters about possibly mulberry, osage orange, or butternut. It would be easy to eliminate mulberry and osage if the piece is light for its size. If so, that points more toward sassafras or butternut. If it is mulberry or osage, it will be heavy for its size.

From contributor A:
I've never seen a mulberry tree big enough to produce a board like that - unless that top is smaller than it looks.

From the original questioner:
I should have given a better description of the wood. It is relatively lightweight, with a medium-coarse grain and light tan-to-brown color. When I received the piece at my shop, it was totally encased in an epoxy coating which had split, curled, and clouded over after being involved in a tornado and rainstorm. In the picture, all of the epoxy has been removed and the piece has been stained and refinished.

I have been thinking that the wood was koa, which I have worked with, but only in small pieces. In my part of the country (Texas), I don't get to see the woods that have been mentioned in the replies. Anything other than pine or oak is considered exotic. This picture shows the entire piece. I wish I could find more wood like it. 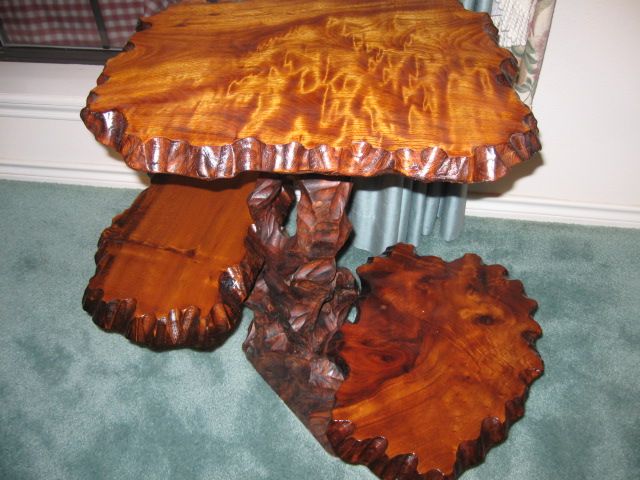 
From contributor A:
What color did you stain it? That would help. Koa is exotic anywhere, but that doesn't look like typical koa figure or grain pattern. Koa can vary a lot in density so can be light or quite heavy. Can the owner give you any clues as to where it came from, or did the twister deposit it in their yard?

From contributor N:
After reading your last post I'd say butternut, based on color and weight. If you'd like more it's usually available here in PA.

From contributor B:
My first reaction was Butternut and your subsequent post made me think that is probably correct. It is the grain pattern and color in the corners away from the figure that makes me think this.

From contributor C:
Reminiscent of avodire.

From contributor P:
The two bottom tops look similar to some redwood burl slabs I bought in California about 30 years ago. There were a bunch of places that sold tables much like that one in the area between Santa Cruz and San Jose. The quilted figure on the top piece would be unusual for redwood, but not out of the question. It looks very amber/yellow in the picture. Is that what it looks like in person?

From Professor Gene Wengert, forum technical advisor:
Chinkapin, madrone or myrtle would be California woods that would appear like this, but only chinkapin is somewhat lightweight.

From the original questioner:
The pictures do show the true colors and effect after finishing, however the real deal is even more impressive. I have never seen such an intense, concentrated, quilted, 3-D effect. The thin yellow squiggle in the upper left quadrant is like a super-bright neon light. Naturally, as the angle of lighting changes, the effect changes. This is a piece that one cannot walk by without stopping and looking.

The slabs would seem to be light enough for redwood (I have been assuming all 3 slabs were of the same type, even though they have markedly different grain). The lower left slab certainly has the grain of redwood (as I know it), but the color before it was stained was a very light whitish-tan. Or tannish-white.

Thanks for all of your input. But I may never know for sure what the wood is, unless I submit it to a lab for analysis. But I am not going to release this into a technician's hands.

I can see myself traveling the world, buying up tons of various woods, trying to find just one more example of this. That would be a tough life. If anyone finds themselves in the College Station, Texas area, I'll be happy to let you see it up close and personal. Or I may establish a museum to house it (lol).


From contributor M:
It might be red oak or balsa.

Comment from contributor A:
It looks like honey mesquite to me. There are many artisans in the Rio Grande Valley and Mexico who use this common wood.