Thoughts on an unusual door situation: a pocket door in an arched opening. April 24, 2009

Question
My client wants a 42" x 7'-0" x 1.75" half round-top pocket door going into her kitchen. The door itself is no problem but I'm having difficulties making the frame and jamb. Any suggestions?

Forum Responses
(Architectural Woodworking Forum)
From contributor B:
If you have room, I typically like to build a flat 2x4 (1-1/2") wall on each side of the door. This allows for a lot more stiffness to the wall as well as not worrying about your trim nails penetrating and stopping the door from operating.

I have also created a "pocket" on the outside of walls where the original wall had way to much plumbing and electric in it to try to reroute. Therefore the header and framing was added to one face of the original wall, making the wall 2" thicker plus the thickness of the door+3/8".

Once you created the square frame opening, can you now create your 2-sided curved head jamb within that opening? One side of the jamb would need to be removable for removing the door of course.


From contributor M:
Unless it is tracked on the floor, how could you possibly hang a half-round top door? The hanger/roller mech's have to be spread toward the edges of the door to carry the weight properly. So, either track it from below or make a square topped door that when in the closed position has a half round visible and in line with your half round jamb. A big problem would be the wall on one side would have to be opened up/made removable. For the installation and once it's in and buttoned up it isn’t coming out.

Go to great lengths (epoxy, thread locker, etc.) to make sure the head track and the method of securing it is built/installed for the long run! You might even leave the one "access" side open for a month or so to allow for any minor settling/make any adjustments and then button it up for good. Obviously this is a time for a "no guarantee" clause, assuming she still wants what she wants after you’ve told her the obstacles you’re up against. Some will surely write in about "not being able to get the door out and not being able to make adjustments" - but over the years all the pocket doors that I have worked on/replaced are because of cheap/flimsy "builder quality" factory produced frames that use light weight head tracks and cheap roller/hanger mech's.

The Johnson hardware referenced installed correctly will last for a minimum of 25 years, more like 50 plus depending on use. Obviously the house moving because of settling or earthquakes or similar are unforeseen forces that could throw the alignment out but trust me that hardware will last a long time!

From Gary Katz, forum technical advisor:
This isn't too rare. We do it occasionally. You can hang the door from the top or track the bottom. Either way, the top of the doors have to be rectangular. We build the split walls just as suggested, from 2x, sometimes flat, sometimes not, depending on the design and how wide they want the jamb. Arched openings often have wider jambs.

The 'trick' is making the top of the door rectangular so you'll have an arched top rail and panel, in a rectangular door. It's no big deal. The big deal is laying out the door so that the radius of the door is parallel to the larger radius of the jamb when the door opening is closed. That means designing the door carefully.

We've done both interior and exterior doors with the same details, and both pairs and singles. Pairs are easier because if the radius is flat enough, you pivot the door into the opening top first, then hang the door from the first carriage at the top of the radius, then slide the door over and hang the door on the other carriage.

On a single door, you'll have to make not just the jamb removable, but the 'wall', too. On one job, we had a closet backed up to the pocket, so we installed all the shelving and cleats with screws, and used birch plywood for the wall finish, rather than drywall. The entire wall could be removed if the door ever had to be taken out.

We've also installed a 'lunette' above single arched-top pockets - you know, an arched panel above the jamb, so you can install standard rectangular casing across the top of the arched panel, rather than having to use flex trim or arched casing. We've made the lunette panels removable in case the door has to be removed.

Yes, it takes a little planning. I found only one photo of a job we did last year and I never shot a picture with either of the doors closed! I was thinking about the wainscoting, figuring no one would want to know about the doors! 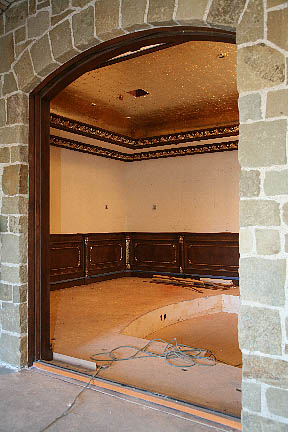 
From the original questioner:
Thanks for the input guys. I know all too well the pitfalls of pocket doors, but when the client pays the bills. I knew the door would have to rectangular in order to hang from the hardware we're using, and we always make pocket door walls thicker and use microlam studs to protect against frame movement due to moisture fluctuation throughout the build. The hangup we're running into with the single door is how the jamb is going to work/look on the strike side and how much of the frame is going to be seen when the door is open.