How to double up two doors in an entry so that one hinges off the other — like a bi-fold, but different. May 26, 2008

Question
Has anyone ever hung a full size interior door off of another door (successfully)? I have a customer who has a 60" opening leading into a study/office off of his foyer. He wants to close off this area with doors, but a double French type door would not work due to interference with one side's door swing. Pocket doors are not an option either. So I thought maybe I could hang one 30" door off the jamb with four good hinges, then hang another 30" off of that, sort of like a large bi-fold, but that swings out of the way when he wants to open the whole space up. Any other solutions are very welcome.

Forum Responses
(Architectural Woodworking Forum)
From Gary Katz, forum technical advisor:
I've done it (and a lot of other crazy weird things with doors) many times. Sometimes I've done them and installed a pivot-roller in the leading door, making a bi-fold door that hinged to the jamb with butt hinges. If you do that, you have to make the leading door smaller by about 1 1/4 in.

But I've also hung them so they swing free, probably for the same reason you have to - no room for a bi-fold to hinge-swing properly. If the doors are solid core pb, expect the leading door to sag a little and hang it right snug to the head jamb, so it almost scrapes the jamb at the head. After all the weight is on the hinges and jamb, it will settle down. Make sure the hinge jamb is fastened and shimmed really good, and don't forget the bottom of the jamb, where the weight of the door will put the jamb under compression. I think of these as a single 6/0 door and treat the jamb accordingly. The hinges at the bi-fold provide an additional adjustment point, too, just in case the door settles a little too much. We usually install a bullet catch in the head jamb at the leading edge of the rear door, otherwise they tend to hinge away from the head jamb.


From contributor J:
Could you use a bypass door instead? As Gary said, the weight of two solid core doors over 5' would be a substantial amount of leverage on those hinges, and also on the jamb/framing. Is the client ever going to need the full 60" opening, or is it just a way to close up that space? If you're just closing the space, you could also propose two side lights with the door in the middle, similar to what you might see on an entry door. If he needs the full 5' opening, than you may be stuck hinging the doors to each other.

From contributor C:
I'm very interested in this post as I was thinking of doing the same thing, only for exterior doors. Only one side would be used as the front door. Both doors would only be open for large item access, as the other entrances into the home are tough for large items. I was planning to use floor and header bar bolt locks to lock the stationary door for the active door to swing on. Also planning on 4 BB hinges into 6/4 jambs into framing for mounting stationary door, same hinges for active. I don't know if my idea would work for an interior door without a sealing/close threshold. But I am curious if anyone has tried this idea on exterior doors.

From the original questioner:
Thanks, I think I will try it. Gary, when you say to "leave the leading door 1-1/4" smaller," I assume you mean in width? What is the purpose?

From Gary Katz, forum technical advisor:
Yes, I've done this on exterior openings: made exterior bi-fold doors. If you hang the leading door off a pivot/carriage which slides in an overhead track, the leading door has to be 1 1/4 in. narrower than the rear door because the center point of the pivot/carriage is directly beneath the track, when the doors are wide open and hinged back. Just imagine the leading door hanging beneath the track and the rear door, on its hinge, hanging out of the jamb, and you'll see what I mean.

I wanted to write an article about this but no one would publish it. It's in my book: The Doorhanger's Handbook (smartly retitled: Installing and Hanging Doors).

I used autobottoms to seal the doors, as the owner didn't want any threshold. They poured exposed concrete sills that were 3-4 ft. wide and sloped outside from the line of the doors. Inside they were level (sort of). I also used extension flush bolts on the butt-to-butt doors. On the active doors (some units had three leaves (doors) and the leading door wasn't captured in the overhead track but swung free like a normal door), I used cremones with exterior cylinders.


From contributor C:
I think I'm following what you are suggesting as far as turning the doors into a bi-fold type operation. I'm wondering if you have hinged one door off another. Looking at the opening from outside, let's say the LH door is active, and the RH is primarily stationary. But when it's time to move the couch or plasma or washing machine, the LH door can swing all the way in and to the right, so that its back is to the back of the RH door, then the RH door (with the LH hung off of it) could swing in also to the right, giving a full opening.

I can see that like your bi-fold idea, the LH or "active" door would need to be narrower than the RH or "passive". My question/concern is with regard to the stress of both doors being hung off the RH doors hinges. Cheating the hang to account for sag makes sense as you suggested, and if I can support the bottom edge of the stationary door when not in use, I think it would be okay. Imagine if the bottom bar lock had a second diameter larger than the hole in the threshold, so that it rested on the threshold when down for support rather than locking. Make any sense?

Re-reading your last post, it sounds like you did this with the last panel on the 3 panel system you refer to. Did you need to go to 4 hinges? And forgive the ignorance, but what is a cremone?

A cremone is a full length bolt that throws top and bottom when you turn the lock handle or knob. A quick Google search will reveal dozens of suppliers and some images. You can see a cremone on the back of the rear door in the photo I've attached. On the leading edge, a large surface bolt locks the door. I don't think the cremone would function properly if you tried to put weight on the lock, but then I've never tried it. My clients always want them to operate smoothly. You can do exactly what you're describing and the doors won't sag nearly as much as you might think, which is why I said to hang them tight to the head jamb, etc. 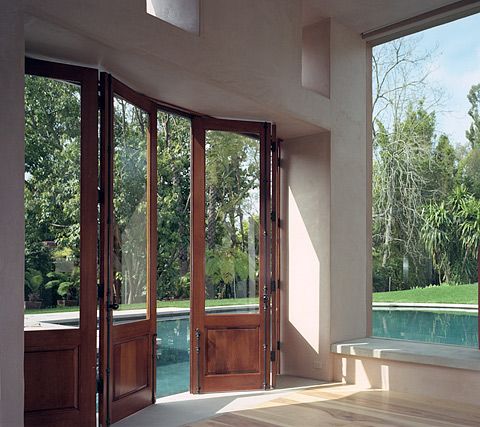 
From contributor S:
If you went with the two side lights as an idea, you could make one stationary and hinge the one on the strike side . You wouldn't get a full opening, but could get about 4'.

From contributor T:
What the questioner is describing is actually known as a "hingefold" door, and a 30" width is not heavy enough to sag considerably. If you go with architectural grade hinges and your hinged jamb is secured properly, sagging will not be an issue. The inactive leaf can be secured any number of ways.