Question
Where can I find plans for an inexpensive sharpener for band blades? Has anyone built one that works? I have very limited allowance. Making my own seems to be the right thing to do.

Forum Responses
From WOODWEB's Sawing and Drying Forum
From contributor D:
I built a band saw grinder by modifying a chainsaw grinder. They have low cost chainsaw grinders at Harbor Freight.


From contributor S:
I got a set from Timberwolf. It was a one page hand-drawn diagram showing how to make an auxiliary table for my bench grinder. I made one in an afternoon and have been sharpening ever since. It is fairly manual (aside from turning the grinder wheel, it is all manual) and it doesn't do a perfect job, but it does do a satisfactory job. I managed to sharpen several blades three or four times before they gave way (I had planned to only use it as a backup between professional sharpenings, but you know how these things can slip through the cracks). The great failing of the one I made is it relies on you, the operator, to maintain the angles (and I have difficulty).

From the original questioner:
Guess I need to look at modifying a chainsaw sharpener. I do own a sharpener for circular saws but I don't know how to make it work on a band blade. I can set angles and the depth of cut, but what could I do with the gullet and how could I cut each tooth the same distance apart? The circular blades rest in a cone and you turn the blade to the next tooth. I don't know how I could hold the band and get this accurate.

From contributor F:
Suffolk Machinery has a video that they will send, showing their sharpener and setter. I like the looks of both. They are pricey. If I had a busy sawing schedule, I would not hesitate to send the blades out. If you are part-time and could do the blade work at night, I say go for it. I plan on sharpening my own. I think the chainsaw sharpener can be adapted to perform like the Suffolk. Get the video. It shows a good machine.

From contributor D:
I bought an OREGON Mod 511A Saw Chain Grinder, available from either Northern Tool or Bailey’s. To use as a band grinder, you rotated the Chain Vice 180 degrees (don’t lose the ball bearing and springs). This puts the chain stop so that it will index the saw teeth for precise sharpening. Remove inner and out vice jaws and cam lock handle and post. From a piece of 1/8 X 3/4 bar stock cut two lengths of 8 1/2 inch each. Match the bolt holes of the inner vice jaws. Countersink the holes and bolt it on with flat head stove bolts. Cut from 3/16 x 1 1/4 bar stock a 6 inch length. Clamp the other 1/8 piece to the bolted-on piece. Lay the 3/16 piece on where the cam lock handle cam post was, mark the location on clamped-on piece, remove and tack weld together. Bore and file a slotted hole. (You will need metric bolts and nuts.) Cut off from 1/8 bar stock 2 pieces 1/2 inch long, tack weld on the bottom corners of the bolted-on piece.

Order a 5/16 or 3/8 wide grinding stone for the grinder, then shape the stone to fit gullet of your band. You will have to take off the outer guide to install the band or remove it. I can sharpen a 12 ft. blade from 20 to 30 minutes, depending on tooth spacing. 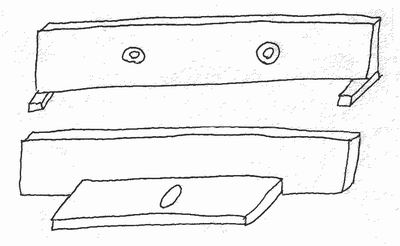 From the original questioner:
I will purchase a saw sharpener and build this thing. Also, I am sending for the tape from Suffolk to look at theirs. That saw sharpener just might do the trick. Save us all a lot of money.

From contributor K:
What brand is your circular saw sharpener? I made a simple jig for my Belsaw circle saw sharpener that allows it to sharpen bandsaw blades. Tooth by tooth, all manual operation, but it does an accurate job.

From the original questioner:
My sharpener is an Acme junior circular saw sharpener. Looks like it would work, but I don't know what the part that holds the blade looks like, and sure don't know how a cam works on one. Guess I will get some idea when the Suffolk tape arrives. I was wondering if you could put some kind of mark on it and bring each tooth to the same mark before sharpening the tooth. Is this correct?

From contributor F:
About got my mill finished. The sharpener looks easier than it may be to build. A manual sharpener, I would think, still needs a forwarding lever system that can be adjusted with a machine screw, for accuracy. It would take too long and still not be accurate doing it by eye. The Suffolk tape gives a good view of the operation, but not a detailed view of its workings. Still believe I can build one with similar results.

Contributor K, can you describe your jig? I have a sharpener made by WoodMaster that was a direct copy of Belsaw. WoodMaster, if I remember correctly, was formed by former Belsaw employees who were either forced out or left when Belsaw and Foley merged. This sharpener was purchased about 18 years ago just after Woodmaster started.

From contributor K:
The blade is indexed by a pin and the radius of the wheel determines the shape of the gullet. 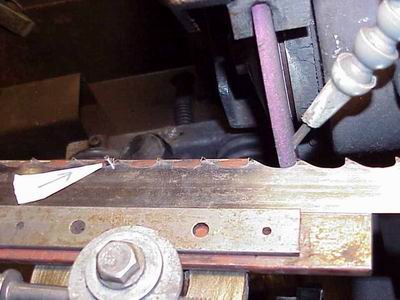 Good looking sharpener. Is the tube for water or air? I saw a sharpener very similar to yours a few years ago but the guy was using a spring-loaded pawl in lieu of the pin.

From contributor S:
How does the mechanics of your jig work? I made the homemade job Timberwolf designed but rely totally on my hand/eye coordination to line things up.

From looking at your pic, here is my guess:
-you index the blade on the pin
-you push the jig forward (on a slight angle to create the proper hook) grinding the gullet
-the blade comes back


-you re-index for the next tooth

Am I close? Does the grinder come forward? How do you get the back of the teeth?

From what I can tell, our systems are not all that different, provided it isn't your grinder that moves and the blade is stationary.


From contributor K:
This homemade jig breaks all the rules for band sharpening, but I already had the machine for circular carbide. The above step by step is correct. The blade is set up 10 degrees to the wheel and slides forward and back on linear bearings, with stops. The grinder head is adjustable L-R for the depth of cut water cooled. That spring loaded pawl is a good idea - it would speed up the process. 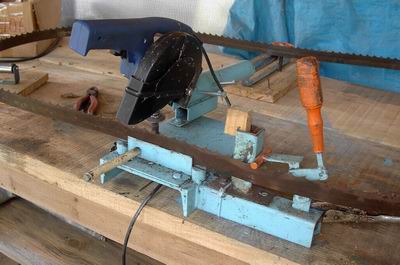 Comment from contributor M:
I use a dremel tool with a 3/16" chainsaw grinding stone. These wheels are cylindrical and the stone is about 1 1/4" long. I sharpen blades that have 4 teeth per inch or less. Takes about 15 minutes to sharpen 113" blade.

The blade can be sharpened on the machine. Four strokes, back and forth, are enough to sharpen the blades as good or better than new. Bandsaw blades are filed in a rip configuration - there are no angles to worry about. The motion is straight in, back out, in, out. Keep the dremel motor level with the table as you grind in and out. For saw mill band blades, which I never have done, the operation is the same, but probably would be better off the saw. This method grinds the gullet as well as the tooth in one operation.