A cabinetmaker gathers ideas for a European style wall unit - with a face frame. March 17, 2005

Question
I'm building a wall unit which is what you might call hybrid euro/traditional. I have face frames on my cabinets, but the doors and drawers are fully inset (most likely will be beaded inset). I'm using Blum Clip Top 120 hinges with the inset face frame adapter. That part seems fairly straightforward once I found the adapter.

The drawers and especially roll-outs are what I'm having trouble on. First of all, the drawers. I'll be using concealed tandem runners from Blum, probably the Tandem Plus 562. They offer two types of extra brackets that aren't normally included. One type is the rear bracket, meant for face frame applications. With that, you attach the bracket to the rear of the cabinet wall, and slide the runner into the bracket. The front of the runner screws into the side of the stile on the face frame. But that must only be for overlaid drawers, because the rail is clogging up the opening - an inset drawer couldn't close all the way.

I was thinking about ditching the rear-mount bracket and mounting them as if I was doing a true euro cabinet. I'd need to take a strip of 3/4" plywood to space the runners inwards. Then they could be screwed in by the sides.

The problem is harder for roll-out shelving. First: Even if the runner *didn't* stop inset drawers from closing, you couldn't space the runners in. The roll-out shelving would interfere with the drawers and hinges. Second: I'd have to use much more than a 3/4" strip of plywood as a spacer if I was doing roll-outs. Probably 1-1/2" to 2". I think this would have a negative impact on the look I am going for. So there are the two main options, neither of which works. I can't use the rear-mount (because the front has no place to mount). And I can't use spacers of plywood and side-mount (because it's ugly, I think).

So here is the one other option I thought of. Blum also offers a universal bracket for undermounting or hanging the drawer runners. I was thinking I could put a horizontal cross-piece set slightly back from the rails of the face frame, and undermount the runners on this. The back would be supported by a rear mounting bracket. Has anybody done this?

I have seen tons of builders do face frame cabinetry with inset drawers. Almost every one I've seen has side-mounted the runners and used spacers. But I don't remember ever seeing a roll-out tray with face frame inset doors. Thanks for any help or comments.

Forum Responses
(Cabinetmaking Forum)
From contributor R:
If you set your box sides flush with the inside edges of your face frames, you can use all the euro stuff just like you would if it were frameless. Much cleaner. too. Of course, you still need to space your roll-outs to miss the hinges, but that isn't too tough.


From the original questioner:
Well, I'd like to make the frames flush with the inside of the box, but the boxes must be modular (ie, completely freestanding/separable). This is by request.

So in order to make the frames flush with the inside, the frames would not be very wide - 3/4" per box. I thought about it, but I'm not sure how it would look. And I don't really mind losing 3/4" around the perimeter of each cabinet, because they are fairly large.

I just thought of one more possibility. Run two strips of 3/4" plywood spacers vertically on each side of the cabinet. They would go out as far as the face frame. Then put two horizontal strips of hardwood where the runners mount, and attach the horizontal strips to the vertical ones. I think that would look better than having monolithic 1-1/2" - 2" spacers. Comments?


From contributor N:
Instead of plywood, use solid wood for the spacers - looks much better! In some cabinets where it gets over 1 1/2" space needed, I have used a 3/4 wood piece and attached another piece of wood at 90 degrees on top and bottom, then screwed this to the side.

From contributor B:
We do a great amount of inset cabinetry with rollouts. Your best bet, in my opinion, is to use 5/4" thick solid wood, with enough projection to clear the hinges on the sides. These are run full length for the opening and drilled for adjustability. This is mounted to the sides of the cabinet directly behind the stiles. A matching set is secured to the rear of the cabinet and Tandem 562H are fastened with appropriate screws. You would need to set these (wood standoffs) back enough to clear the hinges you are using. We use butt hinges on inset for a better look, so it isn't such a problem for us.

From the original questioner:
Trying to make sure I understand your method. I'm thinking the standoffs run vertically, and there are four of them - two in front and two in back.

Are the front ones mounted as far front as they can go without interfering with the hinges? Does this picture look like what you're doing (you can just see the standoffs on the left side): 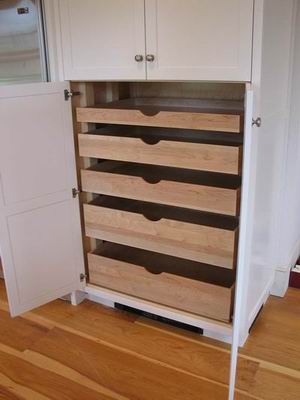 And then you would side-mount the 562H runners onto the standoffs. Is there any problem lining up the standoffs with the mounting holes in the runners?

Also, one thing worth noting is that only one of my shelves will roll out. The rest are fixed in place. So theoretically I wouldn't need vertical pieces going the full height of the cabinet. But I suppose if I'm doing it anyway, it does provide an easy way to mount the other shelves. Cost would really be the deciding factor. I'm using red oak, even for the interior. Solid 5/4" thickness red oak is a bit pricey.


From contributor B:
It seems you get the idea. The standoffs would need to line up with the mounting holes in the slides. We drill these with our line borer (5mm) and use euro screws to attach. I can't imagine it would cost more than $40.00 for 5/4 stock to do a kitchen worth of these.

From contributor C:
You could build euro boxes, apply perimeter frame and utilize all the benefits of a European box. Hinges and drawer guides mount to system holes, rollout guides space over with 25mm nylon spacers made specifically for tandem. Screw perimeter trim on behind hardware to show no fasteners. Inherently componentized. It would be the most straightforward and clean way to build.

From contributor D:
I always drill the hole for my bottom hinge 6 inches up from the bottom of the door for cabinets with rollouts. This allows me to space it between the shelves so I don't have clearance problems.

From the original questioner:
Thanks for the responses. I ended up using thick standoffs, as suggested, whenever I had more than one rollout shelf.

In the situations where there were many non-rollout shelves, but only one rollout, I ran a hardwood support parallel to the rails but set back depth-wise (at whatever height I wanted the shelf). Then I used Blum's universal brackets to mount the runners on top of this support.