Identifying the Wood Species for an Antique Chair

Question
I have a project that requires reproducing an antique chair. I don’t know who made it but I do know that it was used in a Pullman rail car called the "Wisconsin" around the turn of the century for John Ringling. I want to identify the manufacturer and the species of wood used and also the type of finish used so that I can build a true as possible reproduction. 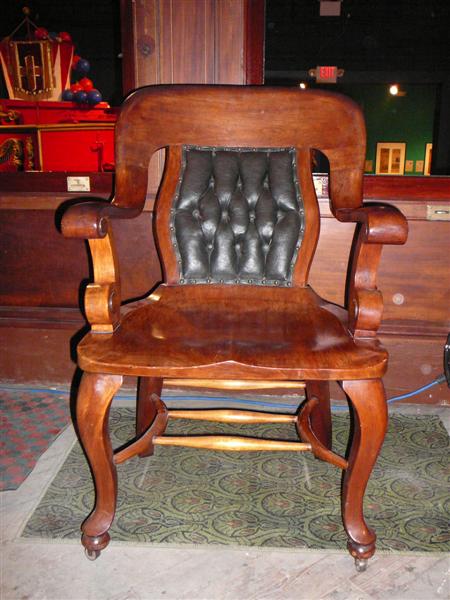 Forum Responses
(Furniture Making Forum)
From contributor K:
I’m going to need a closer picture to identify the wood. Chairs of this type, and these are not rare, came in a variety of close styles from the thousands of manufacturers in the country during the last quarter of the 1800’s and first quarter of the 1900’s. Unless there is a label, identification of the manufacturer is not going to happen without original invoices or bills of lading. Wood was usually birch, maple, or beech, and mahogany. The finish would not have been shellac as some will say but would have been a varnish (I know that shellac was technically a varnish), usually the type made with colophony and a couple of other resins (known now as common brown varnish). This chair appears to have been refinished or cleaned with solvents as it is highly unlikely there was such a variance in color originally as the old aniline dyes were used to blend and give a consistent color, usually to match a red or cordovan mahogany color.


From contributor R:
It’s very difficult to recognize the wood from the photo, but I will guess at birch. In my antique furniture restoration business I often come across sturdy chairs like this in birch, especially with a railway connection.

From the original questioner:
Here are two of the close up shots I have of the chair - definitely not mahogany. 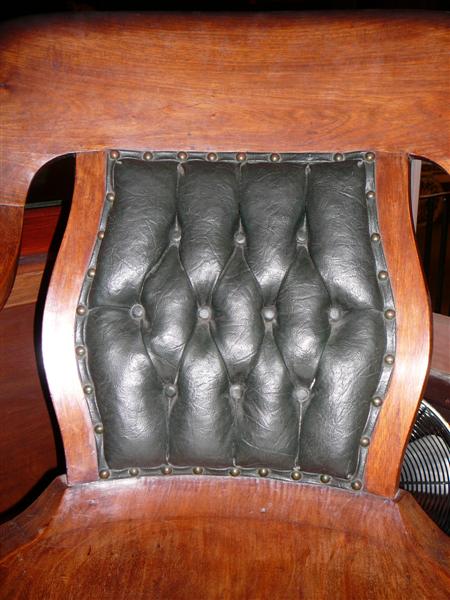 Here is a close up of the carved arm rest supports. 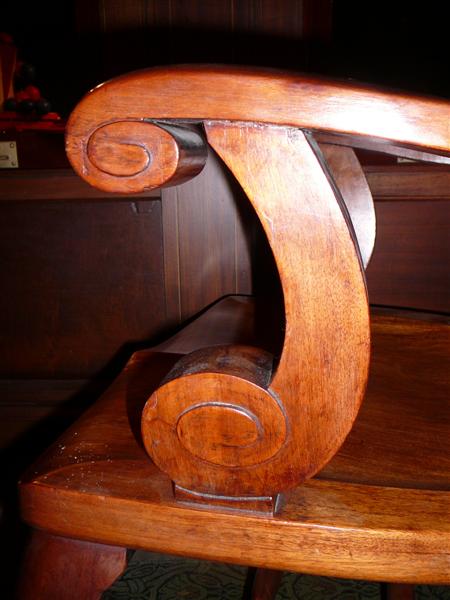 
From contributor R:
I would be reasonably sure it is birch. Birch was used quite a lot during that period especially on stout sturdy chairs.

From the original questioner:
I finally contacted someone who knew the maker of this chair and she shared some interesting details with me about it. Most notably, it is made from G. Mahogany although this chair has been stripped and refinished a lighter tone than the original as can be seen in the photo. Now that I know what type of wood was used I’m moving on to building them now. The client wants five of them so I’ll get to practice my production approach to chair building. If anybody had any comments about cutting cabriolet legs, relief carving or steam bending, I would like to hear about how you would proceed with this project. This job will be pushing the envelope for me in some areas so I will be doing a complete mock up in poplar to work through the steps before I go into production. 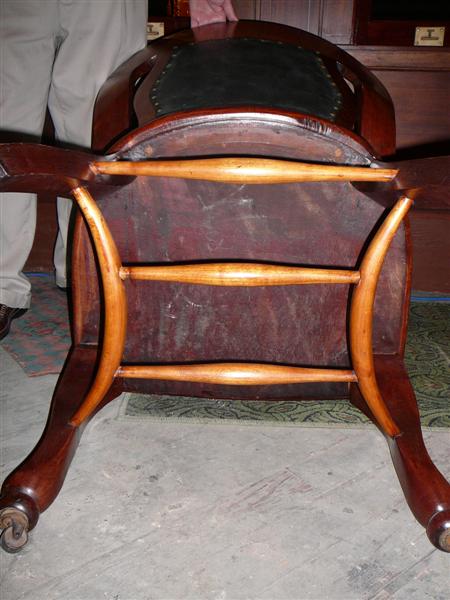 
From contributor O:
I’m sorry to say that this chair is not constructed from mahogany. It’s made from birch and dye stained a mahogany color as were many pieces of furniture made during that period. Mahogany has open pores which this wood does not. Although some of these types chairs were certainly made from mahogany and walnut this is one made from birch. One tell tale sign is that birch weighs a ton and mahogany weighs in at a half ton. Pick up your one ton chair and see what I mean. Most likely it was finished with an oil based varnish.

From the original questioner:
I assumed it was mahogany because that’s what the original catalogue listed as a choice of wood types and birch was not on the list. After looking closer and feeling the weight of it it’s definitely birch.