Installation Tips for Board and Batten Siding

Question
I've constructed a timber frame shed and intend to side it with 1x12 pine board and battens. The pine was sawn in the last two weeks. I've stickered it and have it air drying on a level surface with a roof overhead to avoid direct sunlight. I've strapped the stack to keep it stable. I'm in SE Michigan and am guessing it should hit 20% MC in October. At that point, can I nail it to the frame with a nail, say, one inch from each edge, and not have excessive cracking as it dries the rest of the way? I plan to let it stand and reach 12% before applying a stain/sealer. Will I be in trouble not applying stain to both sides, whereby the inside will see more moisture transfer through the seasons (building is not heated or sealed)? Lastly, can the battens be nailed to both boards they are spreading? I assume so, since the nails in the siding boards would restrict movement. Many barns have been built over the years with wide boards sealed (or painted, anyway) on one side only and I don't see them warping excessively, but maybe I'm missing something.

Forum Responses
(Sawing and Drying Forum)
From Professor Gene Wengert, forum technical advisor:
You want to nail the boards and battens so that you do not restrict movement of either, but especially the boards. The nails are not strong enough to hold the lumber. If they were, then when the lumber shrinks, it would possibly crack.

This is what people who nail green board and battens up say: "Boards want to cup one way, so put the "hump" out (bark side in) and put one nail in the center. Jam them up tight and put the batten on so that the nail hits between the two boards. On wide boards (12" or wider), put 2 nails about 2 to 3 inches apart in the middle."

There is some argument on whether battens should be 2" or 3" wide. It is likely that the lumber will be well air-dried within the 30 days, or mid August. But some people use it green.


From contributor A:
Nail it up and let 'er dry on the wall. On 12 wide boards, put two nails about 3 inches apart in the middle and make sure the nail for the batten goes between the boards. For 12 wide, use no less than 2 inch battens.

In the photo, you see the sticker stain from green stickers on green wood that was allowed to be rained on before installation. Many times I put the boards and battens up within days of sawing them. They dry fine in place and if one should go wild, it is not a real problem to pop it off and replace. 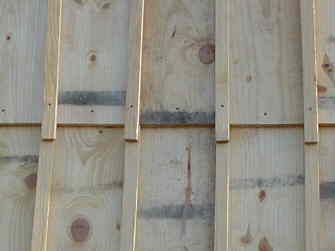 From contributor K:
One more tip. If you choose to use two nails toward the middle, angle them toward each other, so that as the board dries and shrinks, the wedging action of the nails is pulling the board down tighter as they are working against one another. Straight in nails are more prone to backing out with age. However, I think the best fastener to use would be screws. I bought a battery powered collated screw-gun a while back that will pay for itself pretty quickly. Some of the deck screws are coated a greenish grey that would look great with weather wood.

From the original questioner:
Thanks for the guidance. I suspected this was the answer I'd get. I don't think I'll break the news to my buddy that edged nailed 12" green boards with battens nailed to both on his barn. He's doing a very nice restoration on an 1870's home and had the barn frame moved from southern MI and rebuilt on his property. All hand hewn timbers.

Contributor K, thanks for the nailing advice. That'll work.


From contributor L:
"I don't think I'll break the news to my buddy that edged nailed 12" green boards with battens nailed to both on his barn..."

It may work out okay. The guy who re-sided one of my sheds a couple of years ago edge nailed everything. Today I see no nails pulled out and no significant cracking. This was green red oak, fresh off the sawmill 8" to 12".


From contributor R:
Just wanted to add that we have been using deck screws to install battens and have not had one move. We have even used it on fresh cut poplar with no problems. You can really pull the batten down tight and if you did have a problem, just unscrew it and replace board or batten.