Advice on materials and techniques for a large custom door for a wine storage closet. February 13, 2013

Question
I've got a job to build 3 x 22" doors that span the opening to a temperature/humidity controlled wine cellar. It's more of a reach-in closet than a walk-in room, but it will be temp controlled down to 55% and 60% humidity or so.

Doors will be ~8.5' x 2.25" thick, with 5" stiles, with an insulated glass light of approximately 48" x 12" and an insulated floating panel below the lock rail. The plan is to use a Timberstrand LVL core, with cherry edgebanding and 1/8" veneer, which I will resaw myself. I will join the rails and stiles using floating tenons, probably paired.

1) Am I generally on the right track? Any issues with this type of construction given the temp/humidity difference between the cellar and the living space?

3) Can I run Timberstrand through my planer? It would be easier to create that glue-up by adding about 1/16" to the ripped pieces and planing them down to 2". Can you do that with Timberstrand?

4) Please don't get into why (long story), but the client really wants to figure out how to increase the R value of the doors. So we've kicked around various ways to add insulation to them. Given the doors are >8', I've been reluctant to build a sandwich using insulated sheets and plywood, because I would have to seam the plywood and that just seems like it would be a problem. Where I came out was to chamber rails and stiles by drilling out 3" holes along the length of the stile (so like 32 holes over the 8.5' stile), and filling the holes with spray foam. I did the math on that and figure I could take out enough material to almost double the R value of the door, and still leave 1" of core on both side of the holes to support tenons and hinge screws. Does anyone think this is a really bad idea?

Forum Responses
(Architectural Woodworking Forum)
From contributor D:
For us, wine cellar doors are as problem free as any other interior doors, so even though I dislike LVL, I can't see it causing problems. I wouldn't pretend to know how to get higher R values with different construction techniques myself. If that was the scenario given to me, I'd shop around for the highest R-factor commercially available slab and modify it to suit.


From the original questioner:
Thanks. The problem with modifying a commercial slab is that there are a number of other S&R doors in the room, and the requirement is to match them closely (rail height and sticking profile). It's going to be as much work to do that with a slab as to build it up from scratch.

From contributor V:
I agree that wine cellar doors are problem free. Exterior doors are exposed to far worse and they are mostly built much lighter than your planning indicates. In other words, you are overworking the problem - my opinion.

Use a good perimeter weather strip and a low wood threshold with bulb door bottoms, and rabbet the doors together with small silicone bulbs to seal. I see insulated glass in half the wine doors we make, the rest are art glass or similar, single glazed. I would just use solid wood here unless you are using very expensive or rare woods. The temp and humidity differences are not unusual for living spaces, and wood doors have worked well here for thousands of years. 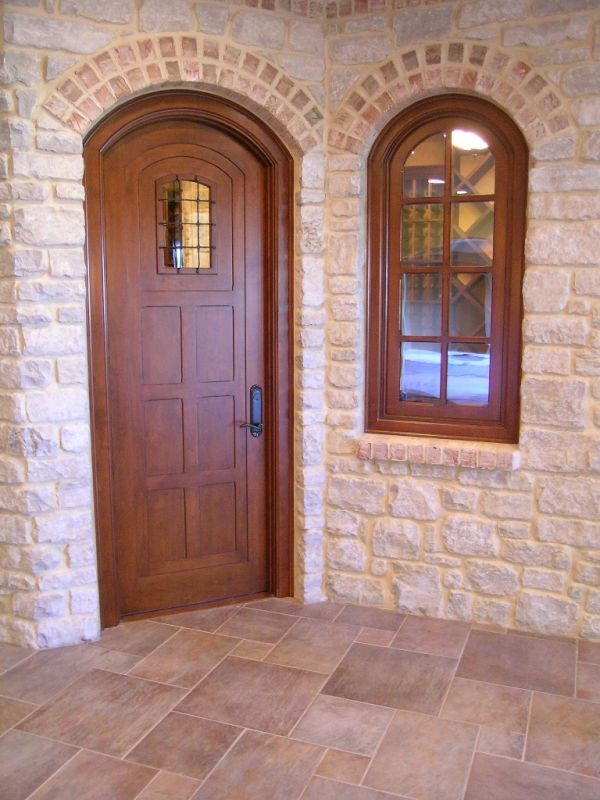 
From contributor V:
I should have mentioned that the drilling and spray foam thing borders on insane when you consider R-factors and heat loss in the real world. Makes me wonder what kind of windows are in the house? If he insists, I would not warrant it since so much structure (what makes wood reliable) is being removed or disturbed. But then, if he wants to pay for all that labor...

From the original questioner:
I think the R factor thing is not so much about energy efficiency as it is about heat loss in the cellar itself. Client is going for a passive cellar. The books on building those call for an R-10 door, but those won't have the visual impact. It's part of a longer story.

From contributor D:
I think you are pretty on track, and frankly, overbuilding this. Timberstrand is very stable, but expands like any wood, mostly across the grain. The sheets come with rotary sawn veneers glued on edge under extreme pressure. Used as is, the expansion will be in width (remarkably so). Rip, flip and reglue it 90 degrees and it expands in thickness. Stuff still stays very straight even if you chuck it in the river (no, I'm not a litter bug). Yes, you can run it through a planer. One thing I know is the R-factor is only as good as the weakest link in the chain, which is the IG. As an IG manufacturer I know you'll never get more than R-6 with the thickest, finest, triple layer argon gas filled units out there, so foam in the panels or in holes drilled in the stiles or whatever will make the door lighter by a few pounds I guess, which is good since these are 2 1/4" thick cherry. Lighter is good when you're drunk and down in the cellar getting that last bottle for the evening dinner party and slam it on your finger.

From contributor J:
Our shop could meet these standards if requested. It would be expensive... Since it is more of a closet with narrow doors, I would suggest building the units as Euro window - doors. Stiles 78mm wide X 80mm thick using 3 or 4 pane Heat Mirror glass, triple rebate edges with 3 gaskets and multipoint locks to pull the sash tight against the gaskets. You could push R value a little more by laminating some foam into the stiles. A pine core would probably have a better R value than Timberstrand.

We usually do wine room doors using a 68mm thick Euro door system with foam insulated panels and dual pane IG, but you won't get R10 with this.

I don’t know about planing Timberstrand but have abrasive planed it with success.


From the original questioner:
Great. Thanks guys! And just so I am clear, if I rip, flip, and glue the Timbersrand, it will change the primary axis of expansion from the 2" thickness, and that sounds like the right way to lay a veneer over it. So I am on the right track.

I understand the skepticism of the hole and foam idea. But in this case I am just trying to figure out how to keep him happy. I might quibble, though, with the "only as strong as the weakest link" argument. Isn't that like saying there is no benefit in putting R19 in your walls because your windows are only R1?


From contributor D:
You got me to thinking. In the past, most of my problem with LVL was the expansion, like an accordion, had cracked face veneers. Typically moisture took up around hardware mortises. You could actually measure a 5" wide stile at 5 1/8" right around a door handle, which when removed was moist inside. This is more than the shrinkulator says it should be. Anyway, eureka moment just now. Reorienting the grain may just be a viable alternative for us.

And I accept the quibble - but also compare apples to apples. Square footage of twenty windows on a whole house is a small percentage of the total surface area. Your three glass openings at 48" x 12" for a "reach in closet" is a much greater area of weak link. Hell, if your customer doesn't mind throwing money at it, try to fit two layers of triple glaze in there. I did that to my garage windows (I get the discount, so why not?), and they made a difference I can physically feel. Nothing like going out into your garage in the middle of the night in your underwear in the dead of winter to check something you glued up before you went to bed, and not get cold. So yeah, extra layers of glass and dead air space help, albeit my garage windows are only about 18" x 12".


From contributor I:
LVL is made under high compression. You introduce any moisture and each one of the many layers want to expand, causing cracked veneers. Most large producers of doors that have success with LVL or Timberstrand actually use a thin melamine type layer between that and the veneer. I personally have not used Timberstrand (and won't) for any engineered door products.

I am biased, but good old solid wood core is the most stable, easy to work with, and still gives that feeling of a solid door. I can't speak as to R value, but we have done a lot of wine doors with drop down sweeps and either kerfed rabetted jambs or we kerf the door stop to accept Q-lon type weatherstrip. Real upscale, you could go to spring bronze.


From contributor R:
Using a honeycomb or foam core is the way to go. You can butt the core pieces together in the glue-up with no loss of strength to give you your 8'6". Rigid foam insulation has an R value of 7 per inch thickness. Still air has a great R value as well; just make it hollow.

From contributor R:
This response may be a little late, but I have a different thought about how to address the issue of R-value of the wine cellar door. Instead of trying to increase the R-value of the door itself at great expense, would it be possible to build/install double doors with an air gap between, thereby creating an air-lock? If both doors are sealed (weatherstrip and sealing threshold) then the air trapped between inner and outer doors becomes a part of the total insulation package. This answer seems like a win for your company, as you would be building/selling more doors; and as you said, the client wants to throw money at achieving his desired R-value.

From the original questioner:
Thanks for chiming in. It's a good idea, but the space doesn't accommodate it. It's only 24" deep, so an airlock would displace all the wine!

From contributor R:
It was worth a shot anyway. I am curious how you cut your mortises for the slip tenons in the Timberstrand core, and about how they actually turn out. Just finished building a 42" exterior door with a Timberstrand core. My first thought was to use slip tenons, but had major issues with the mortises when cutting them across the plies. Cut my mortises using a router and the MortisePal jig, but had issues with blow out in the corners of the slots. Actually going with 1/2 x 4 1/2" birch glue dowels. I will let you know how well that worked in about 5 years or so. I think it will be okay, but slip tenons would have been stronger.

From the original questioner:
Hmmm, that's a bit of a worry. I was going to edgeband the LSLs with 3/4" cherry and just mortise them with a 1/2" upcut router bit using a jig. If that's what you were doing and it didn't work, then maybe I need to look at dowels instead.