Particleboard cores of laminate architectural elements can shrink in place due to seasonal changes in interior humidity. September 5, 2010

Question
We installed Wilsonart plastic laminate windowsills during the summer season. They measure 6" in width and vary in length, but the longest section is 27'. The laminate is bonded to particleboard and the substrate is covered with the laminate on all surfaces. The sills were built in a shop in 12' lengths, delivered and installed. All of the end joints were biscuited and glued. Now that the heating season is well under way, the end joints and the butts to walls have opened up about 1/8" each and one end to the wall has actually curved away from the window almost 1/4". The sills were constructed per specifications and an approved installer did the work. Both the owner and architect are claiming that the laminate cannot move this much and are saying that the substrate had to be left outside and gotten wet for this much movement to occur. Are there any articles that would support the poor design of having the substrate glued directly to the masonry sill that extends to the outside, which is quite cold, while the interior is heated? Here is a picture of the wall that has pulled away from the window frame. 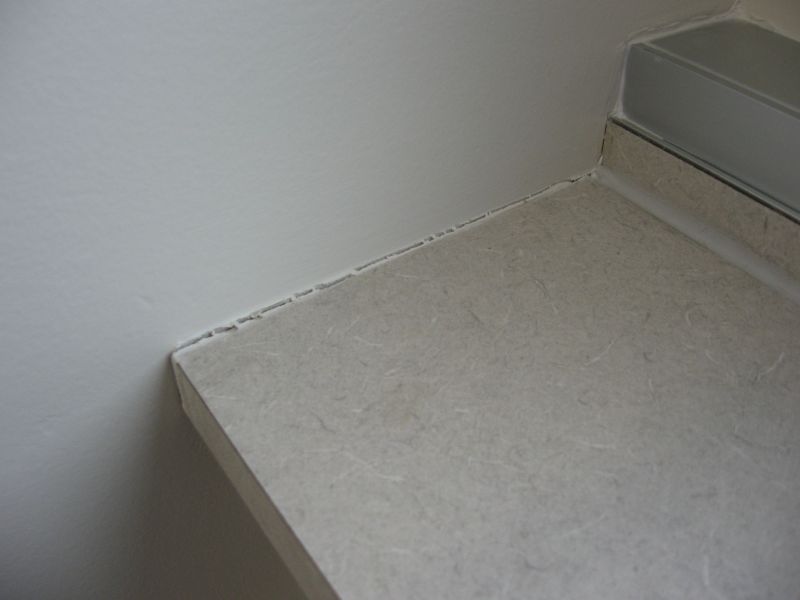 Forum Responses
(Laminate and Solid Surface Forum)
From contributor R:
Is this a stick built structure? If so the walls are most likely the culprit. The wood is already swollen from the humidity and then all the water was added to the structure during construction (drywall compound or plaster, painting, etc.). When the heat is turned on, the walls give up their moisture and shrink. I am pretty sure if you take a walk around the building, you will find this happening elsewhere as well. I have had this happen to me with stairs on jobs where the wall has actually pulled the skirt away from the stairs as much as 1/4". I have also seen it happen with crown moulding - as the joists shrink, they pull the crown with them and in some places gaps can open.

Your laminate and particleboard are not going to move that much, and if you left the substrate in the rain, there would be a pile of oatmeal for a sill right now, not shrinkage. The contractor and architect should be aware of this phenomenon.


From contributor J:
Could it be that the particleboard substrate has expanded while the laminate itself has stayed the same size? Are there gaps between the substrate and the wall, or only between the laminate and the wall? If the building is artificially humidified, then moisture from the humidifier could condense on/in the cold masonry walls, raise the MC of the substrates, and cause them to expand... (maybe).

From the original questioner:
The building is steel frame with metal studs. There is no evidence of movement in the drywall or anywhere else. Other than some wood trim that is very slight. The windowsill area in the photo is 24' long area with 2 - 12' sill pieces. There is a small 1/8 gap at each end and a 3/16 gap in the center. The substrate appears to have moved with the laminate (see next photo). The substrate is covered with the laminate on all sides (but not the ends) to prevent any moisture problems, since it is against the aluminum framed window. There is artificial humidification in the building, but I am not certain where it is set. 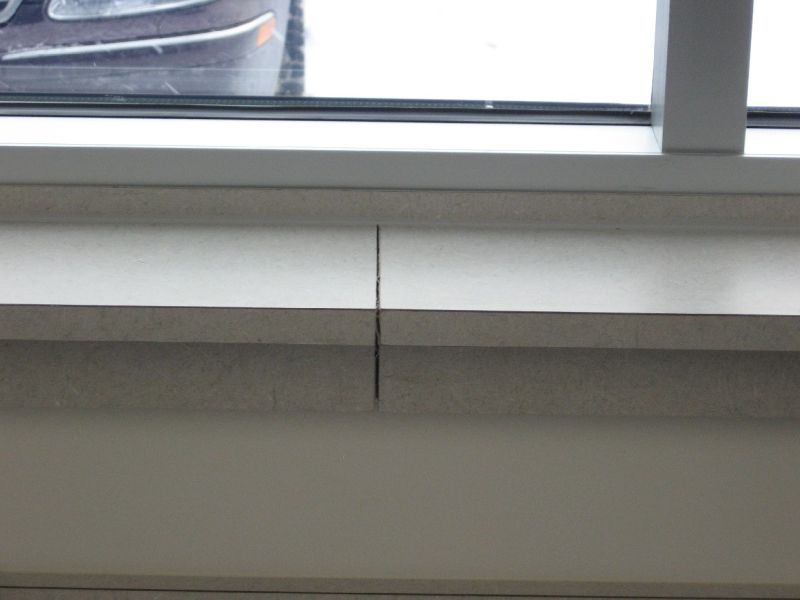 
From contributor J:
Well, a technical bulletin from the Composite Panel Assoc. (an organization I can't vouch for) suggests particleboard can move 0.25% as RH changes from 40% (easily possible in winter) to 85% (easily possible in summer). A quarter of a percent of twelve feet is 0.36'', or nearly 3/8" for each 12' run. The fault here appears to lie with whoever designed this arrangement with the expectation of no movement whatsoever.

From contributor R:
So much for the walls shrinking. 3/8" over 24' probably isn't that unrealistic. Both are made from wood or paper and this time of year, with the heat, it will move somewhat. I didn't realize in my last post that it was that long of a run. Can you remove the sills and use some sort of mechanical fastener at the joint to keep it from separating? It would be a lot easier to make an acceptable repair at the wall and allow for movement in the future. Are the ends sealed?

At this point I would contact Wilsonart - they should have the data as far as actual expansion and contraction when used on specific substrates.


From contributor B:
Laminate is a wood product (made out of paper) and does move with changes in humidity. The architect should know this. It will change more across the grain than the length, however with a 27 foot part, your caulk joint could be about right. This is not a defect in workmanship or material; it is just a fact.

From the original questioner:
I have the Wilsonart tech data that says stability is 0.5%. That equals almost 3/4' in 12' which I find hard to believe. It doesn't give the variables for stability temp or humidity. If it is saying from -40 f. to +300 f. it may be believable. The butt joints were biscuited and glued but that must have failed. I have no desire to attempt a mechanical fastener - that would likely cause something else (glass breakage or who knows). I think the product is acting as it should in this location (right at the cold outside and warm inside junction). I may suggest complete replacement by any installer the architect chooses and if any movement is evident after 1 year, then the architect pays the bill plus interest.

From contributor B:
It has nothing to do with temperature. Your problem is the change in humidity. I think the actual spec is .5% across the grain and .4% along the grain. This is normal and within spec. The laminate moves about the same as the particleboard substrate, which is why plywood is not a good substrate. The movement is from 100% saturated to oven dry. Your conditions aren't that extreme but are enough to cause a gap. Re-caulk the joint and move on. There is nothing you can do to stop the movement. A better design would have taken into account the limitations of the material chosen.

From contributor Q:
Are they holding up payments to you or threatening legal action?

I would caulk the joint with 100% silicone and this will move with the material. As an installer of this type of stuff, quite often the laminate is a cheaper substitute for other products such as solid surface, so this is to be expected.


From contributor K:
I agree with everyone else - movement is to be expected. It looks like it is 3/4" thick... If so, the movement is not constrained or minimized by cross members.

Generally speaking, we allow for a 1/16" gap for expansion and contraction and caulk it off. Without it, compression in the corners against the wall can actually cause a lift in the laminate.

If it was made to their specs, it's their issue. The fact that there is a consistent contraction (1/8") at all three locations on the top should illustrate to them the expansion/contraction.

I would offer to remake it, at their cost, but this time as one piece, leaving 1/16" on each side and caulk it off. Be sure to template it...


From contributor I:
Your problem is not new, as you have seen already. However, if you had them cut a sheet of solid surface for this location, your problem not would be there. In addition, if you were to use some trim over the area that currently is done with laminate (after a healthy dose of silicone caulking) you would not have further issues for a while, or at least until you decided to go to solid surface in any case. I am assuming that the support for this on all three sides is solid of course, with the caulk and trim approach.