Cut one stick in two pieces, and the pieces won't match. Whattayagonna do? April 16, 2009

Question
The pictures are of panels for this mahogany entry door that I'm building. It's African mahogany. In the rough they looked the same, but after planing and shaping, one board looked lighter in color with more sap, maybe even a different species. Heck, I don't know. I have a little experience with Honduran and African and can tell between the two but I have never seen either be this light in color. I need some advice before shucking out another 5.00 a BF and driving 120 miles round trip. I thought I would see how it stained out before I glued it to the point of no return, and I just don't feel good about it. Should I stain it, clamp it without glue or panels, then clear coat it in order to finish the panel groove? I'm sure it would be better but maybe unnecessary - maybe just a little silicone around the panel on exterior side after door is complete will suffice. I try to do everything the absolute best way I can, and hardly ever regret it, but hell - enough is enough. What do you think? 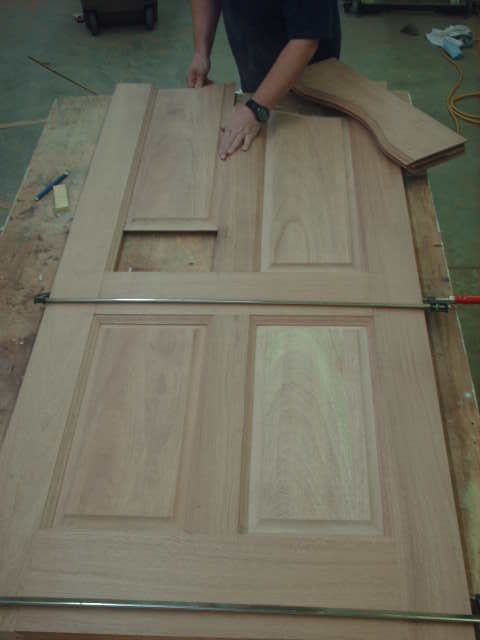 Forum Responses
(Cabinetmaking Forum)
From contributor A:
I have seen this quite often. I built my personal kitchen with that lighter colored wood sorted out from other jobs. Two years later you need to look close to pick out the lighter wood. Some that started out dark are a real dark brown now. You may or may not get away with this. If it is getting stained, you will be fine. I try to tell the customers about cherry and mahogany evening out with age.


From the original questioner:
Thanks. I swear on one end of the panel it looks like white oak, while on the opposite end it matches the rest of the door.

Please don't laugh but... do you think I can take them to town and put them in the tanning bed? I know it sounds crazy, but I did read where a guy left his shoes on a mahogany floor that was unfinished, and when he picked up his shoes the next day, there were two noticeably lighter shoe prints. The more I think about it, the more I like it.


From contributor B:
I think it's all the same species. Please let us know how the tanning worked.

From contributor K:
Tanning bed does works, but will take at least 2-3 hours to get results unless they have a nuclear tanning bed, then maybe 15-20 minutes.

From contributor L:
Probably just a different part of the tree. I have people tell me I can't match color and grain, that they could do a better job in their sleep. Then I take a 12' stick of cherry and cut it into 2 6' pieces and put them side by side. They look at it and say how come it doesn't match? It is the same stick. I have actually had a lady request me to build her kitchen out of 1 tree so it would all be the same color.

Same species, I bet. Just a different tree or near the root of the tree. If you want it to match, I would suggest making another panel out of some other board that matches better. I am sure the suntan won't do what you want.


From contributor R:
African mahogany will run from an almost white or buff color to a dark orange, all in the same batch. If you are staining you may be able to even things up, but with clear coat it will take time for them to even out. If it does at all. There is not much oil in the African mahogany; it seems to be a pretty dry wood, unlike its south and central American cousins. The tanning booth sounds like a novel idea. I have seen wood suntan pretty quickly. I was building a counter out of Brazilian cherry and had the door open in the shop. It actually darkened where the sun hit it and you could see the line where the garage door had blocked out the direct sun. This happened while I was sanding it, so... in a matter of about 20 minutes. I have also seen it happen rapidly with teak going from light green after being planed to brown as the sun oxidized the oils in it.

From contributor Z:
Why a tanning booth? Just use the sun. Go solar!

I suspect that the staining will help with the color but not with the grain mismatch. Working with wood has challenges like this and that is why we have so much fun. Best is to match each part after planing but before milling. I'm sure you don't want that advice at this point, however.

If it is any consolation, I have purchased doors and other finished wood products from major manufacturers to install in houses that had similar mismatches that you display here. And I am not talking about Home Depot products. It boils down to what your customer can live with for the money spent. But more important is what you can live with knowing that your product will speak for you long after you get paid.


From Professor Gene Wengert, forum technical advisor:
In addition to the variation between heartwood and sapwood, and tree to tree, plus geographic variations, some species, especially soft maple, will change color depending on the angle that it is viewed from. It may look light from one angle, but then when you look at it from 180 degrees, it can be dark.