Tips on care and feeding of a portable sawmill. November 27, 2007

Question
I own a three year old B20 that has about 820 hours on it. I have replaced the guide roller bearings and a few other small things. I am wondering if anyone who has a B20 can tell what other parts might need to be replaced in the next 150 hours based on your experience. I am not talking about insert belts or other normal wear items. I would like to know this so I can have the parts on hand.

Forum Responses
(Sawing and Drying Forum)
From contributor R:
My remarks are not for replacement or spare parts, but to pass on some information that will sooner or later creep up on this mill. This is a very accurate mill and to keep it cutting super accurate, it needs to be super aligned and plumb. The torpedo level that most everyone uses is not accurate enough for a good mill like the B20. The orange box store sells a 24 inch blue color level for about $35 that will do the job.

Follow the alignment procedure on the TK maintenance DVD. My mill from the factory was so out of alignment that the blades were cracking on the back side and breaking. I check my alignment at least every 25 hours or each time the mill is moved. I have owned other mills, but like my B20 much better than the previous mills.


From contributor S:
I have well over 5000 hours on my B20, great mill. Guide bearings used to go out pretty often until I drilled a small hole in the seal and greased them with a needle nose grease gun. 4 years now on the same bearings. Replaced the turner chain once; those big logs are hard on it. On the big idler pulley, the bearing worked loose in the bore. Took it to a machine shop and had it sleeved. Setworks used to be erratic until I put an industrial cord reel on; now they haven't goofed up in over a year. Even a brand new cord reel from Timberking is junk - the ground circuit doesn't make contact all the time. Had trouble with the log dog turning up until I redid that a little, now it works good. Just replaced the 27hp Kohler with a diesel. It was still running fine. I never expected to get over 5000 hours out of it. The only problem I had with it was it was over-revving sometimes. There's a little shaft that goes down into the carb with a rubber boot on it. Took the boot off and oiled it, and it worked good after that. Sure is an easy mill to work on when needed.

From contributor R:
I am planning on putting the second reel on my B20 to control the lubrication off and on plus the engine throttle. I need a good source for a reel and would like to find one with 4 wires plus ground so I could use just one reel. You are dead on with the quality of the reels used by TK. Mine broke at 80 hours and TK sent me a used one with tree sap all over it, and you can guess what transpired with that. (I was sent a new reel after the phone call.)

From contributor S:
I used a white oak block on the bottom of the screw with a half moon cut out a little bigger than the screw. I'm thinking of putting an electric throttle control on too, but I would need at least 5 wires - 3 for the setworks and 2 for the throttle - unless I could find a 1 wire solenoid strong enough to run the throttle. I'd watch eBay for a good cord industrial cord reel. 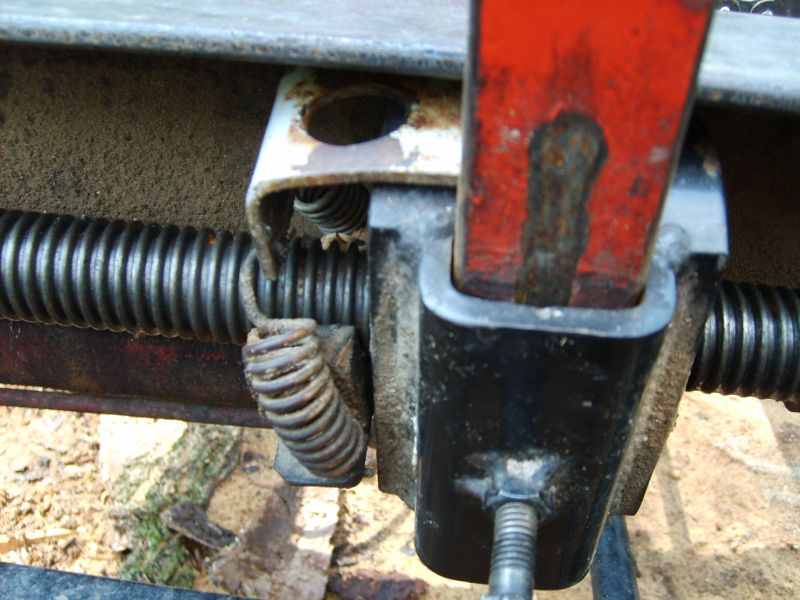 
From contributor R:
My idea on the dog was to drill and tap two more holes, one on each side of the existing adjustment setscrew. This would only require a small amount of pressure on each nylon plug at the bottom under the spring. The single screw requires too much pressure and deforms the nylon and then we keep tightening it and this ruins the spring and nylon plug. What are your thoughts on this?

I am starting research on the extra reel or one that I can run more circuits on a single cord. There are a lot of 12V solenoids out there and I just have to find one that will work.


From contributor S:
You could sure try that. The biggest problem I had with the plug was it would get loose where you run it most of the time, then when going farther out, it will get so tight it would barely turn. That setup I put on works the same the entire length of the screw and always works. The only bad thing is the dog goes out 1" less, but on the big logs I use the turner to hold them in place. I've seen cord reels on eBay with up to 12 conductors... Might be getting too big in size to mount back there. I was running 2 cord reels for a while (which worked just fine). That's how I figured out the ground circuit was bad. I ran an extra ground circuit on the white wire, which has the metal finger contacting it. That was the end of the setwork troubles. Might have to go back to a second one to run a remote throttle if I can't find a 5 or 6 conductor one or a solenoid that will work.