Steam bending is impractical — laminating small strips into an arch shape for moulding stock is the way to go. April 24, 2009

Question
I am a cabinetmaker who is looking at getting into making trim for residential customers. I know that upper end houses sometimes have arched trim that needs to be made for the windows and doors. As far as I know, that solid wood has to be steam bent and then run on a curved moulder. I am wondering how you make templates for the arched pieces. I am guessing that you have to make templates for each window and door because each arch may be a little bit different.

How do you make your templates? Do you use some kind of transparent material and just trace the upper portion of the window? Also, if anybody has any information about steam bending wood and making the arched trim, I would appreciate it.

Forum Responses
(Architectural Woodworking Forum)
From contributor M:
I think you are misguided with the steam bending. Either laminate thin strips around a form (they make clamping table for this) or saw the blanks out of wide lumber. The only thing you should template are elliptical casings. Radius trim can be figured mathematically or, if it is a half round, by the diameter.


From contributor P:
I make templates from either 1/4 or 1/2 inch MDF. Curves fall into several categories: radius, elliptical, freeform (French), etc. You also have mouldings in which the profile is on the face, such as arched casings. Or mouldings that have the profile on the edge, like curved nosings. These usually require different machines to run efficiently. Shapers, arch moulders, CNC, Woodmaster, W&H, are all machines that are employed to make curves. 3D curved mouldings get even more involved. I have never really used steam bending, and prefer sequence sawn laminates, solid stock, or glued up blocks.

From contributor R:
I agree with the advice above. I template (when needed) using 1/4" ply, hardboard or even cardboard. I own a Woodmaster and have made a number of curved moldings on it. I have never attempted steam bending. It would be fairly large and difficult. I prefer laminating thin strips or building up the blank from segments, then cutting the radius out of that.

If cut and sequenced properly, the thin strips can literally look like a solid piece. You can build your own bending forms, or buy one of the many adjustable forms available. Some are very reasonably priced and functional.


From contributor D:
The above posters are correct regarding the methods of producing curved mouldings. I prefer bending strips around a bending form. It is true, if done from one board and marked to assure they go into your bending form the same way they were when they were all part of one board, the piece will look as though it has never been touched; that's if it is done properly.

You are likely to have some issues, though, with maple; we have experienced small, black lines that are visible at each glue joint in maple.

Regarding templates, I use either Kraft paper or corrugated cardboard. Cardboard is preferred. The above poster was correct in saying that really the only need for a template is elliptical arches (half of an oval) or, of course, an oval window.

A half round window is easy; it is half of a circle. Measure the inside dimension at the widest point, add your reveal (typically 1/8"), multiply your reveal by 2, and that is your overall inside dimension. Now divide by 2; that is the inside dimension radius. That is the information you need. Once you know the radius, you can make a form, even out of a sheet of plywood if need be. Make yourself a large compass and set your radius and draw it out. Now screw on blocks of wood and bend the strips around these blocks. You will want to lay down plastic so the strips do not stick to your plywood or blocks. Prepare to get messy. There will be a lot of glue that oozes out.

To measure a segmental arch (eyebrow type arch), it is also quite simple. At a job site I will tack in a small finish nail at each end of the arched jamb extension. Then I stretch a piece of mason's line (string) from one nail to the other. Then I measure up from the string to the highest point of the arch. Then I measure across the overall width of the window. The height is called the height; the width is called the chord.

Once you have the height information and the chord information, you can calculate the radius. A segmental arch is really just a segment or part of a bigger circle. I have an Excel spreadsheet I wrote that calculates the radius if you know the chord and the Height.


From contributor J:
Picture a bow and arrow...
1/2 cord (bow string) divided by the arrow (height) X 1/2 cord + arrow divided by two = radius
(Commit to memory)
The ellipse is based on major and minor axis and is usually drawn by trammel or string (now called CAD).

Curved casings and radius moldings and stuff were traditionally cut from solid boards and put together as annular segments. This can often be done quicker than it takes to build a bending form and re-sawing all the stock. (Yes, it takes a little more work in the field).


From contributor E:
I have used the Foley Belsaw moulder and the Stagner. If you are going to go into production, the Stagner is the only way to go. The shop I was with purchased the Stagner molder and the bending table. That worked the best. The molding we produced out of 1/8" pine that was purchased from the west coast. If you make production molding, you should also back cut the moldings. It makes the application easier for the installer. The post for templating is correct.

From contributor L:
Making arched moldings... Forget the steam bending - it's almost impossible to bend a board edgewise. We provide two choices, strip laminating or segments that are finger joined. Starting with a board that is at least twice as wide as the molding, pencil a large "V" on the face, straight line one edge, then using the straight line saw, rip the strips. Put them in order into a holding rack so you don't have to sort them at the glue-up table. Strip thickness varies with the curve. Too thick and the molding will want to straighten out after it comes off the form, too thin and it will want to pull in to a tighter radius. You can see the adjustable form we use in the Shop Gallery:

On casings that require shapes that can't be done on the adjustable form, we cut male and female forms from particleboard on the CNC router. We use the clamp rack to squeeze the strips between the inner and outer form. Make one of the form halves very stiff and the other a bit on the flexy side so you can get really tight glue lines. Once the glue has cured, scrape the excess and run the blank through the wide belt to flatten and bring to about the right thickness. Put the appropriate knives in the head for the Stegherr arch molding shaper; adjust for width and thickness and run. If the customer is willing to pay for a backout, run that first. The same knives are used for the curved casing as we use on the Weinig molder, but we have to put them in a slightly smaller diameter head for the Stegherr. The arched molding shaper just follows the curve of the wood, so no fixturing is normally needed. Profiles on curved edges are run on a shaper using a molder head or on the CNC router. Curved crown molding is usually run on a heavy tilt shaper using a molding head. If the crown is not a true radius it can be run on the CNC, with more setup fixturing they can be run on the tilt shaper. Moldings run on the CNC take up valuable machine time and require some additional sanding due to the multiple pass machining.

The time (cost) in making curved crown mostly goes into making the blank and not the actual machining. The blanks are brick laid from layers that have been joined by dovetail keys to hold them tight. Setup for molding production can be done on the cheap for small quantities, but to be able to provide the full range, you will need to spend some money on equipment and learning. You can use a knife service and a William & Hussey molder if time is not a consideration. The W&H is agonizingly slow, but can usually get there. Deeper profiles require multiple passes with less and less feed roller contact each pass. Cheap, rubber feed roll planers can also get there, but have drawbacks for any sort of production use. A heavy shaper can do a lot. You can jig it to do curved casing and put a single wheel power feed on it to improve quality. A heavy tilt shaper can do even more. Feeds make shapers much safer and produce higher quality moldings. It’s possible to hand grind molding knives, but much better to use a profile grinder.


From contributor C:
While steam bending would be a difficult way to make an easy piece, I have been making some radius casings using engineered hardwoods, and handbending them to the desired size. Rather than try to bend something on edge, I break it up into 3 or more squares and shallow rectangles to build up the profile, and bend them around each other. It results in only a few glue joints, and a molding made from solid hardwood. I've included an image and a link for more photos of this method. 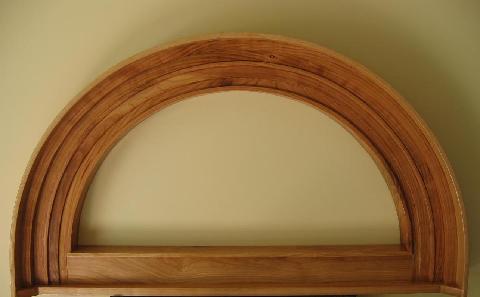