Making Your Own Wood Shakes or Shingles

Question
Has anyone out there ever saw or used wood shingles? I have a bandmill and a plot of land with cherry, hickory, maple and hemlock. I've always heard of cedar being used or some other tropical hardwood. It would be used as siding on a new house that I'm building, but just as an accent on two large dormers. What do you think?

Forum Responses
(Sawing and Drying Forum)
From contributor S:
Sure, you could make your own shingles but on a new house and just for an accent I'd use commercially made western red cedar shingles. Before everyone could go to the store and buy what they wanted shingles were made out of whatever wood was at hand. Oak, cedar or other long lasting wood would be used on important buildings with lower grade shingles used on outbuildings and barns.


From Gene Wengert, forum technical advisor:
Shingles are used for an exterior roof. Shakes can be used for siding, interior or exterior. Shingles must be made of a decay resistant material (that is why cedar is used and the other species you mentioned will not work). They must not split when nailed or when exposed to wetting and drying. That is why white oak is not desired. They also must be fire retardant treated in many areas of the country.

Wood shingles may also have special requirements before the home can be insured against fire. This might affect you if you have a mortgage, and will certainly affect the resale of the home. You also need to check with the building inspector about what he/she will require.


From contributor G:
Old growth douglas fir is another wood used for shakes and shingles.

From contributor S:
Here's a house in Kentucky with handsplit white oak shakes. This photo came from the Tarheel shingle mill in North Carolina. I've been told the white oak shakes will last at least 50 years, if applied properly. 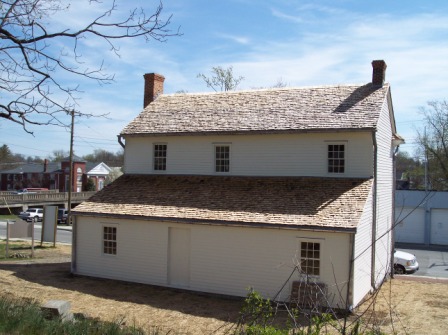 
From contributor A:
I was taught that shingles were sawn and shakes were split. I looked at the Cedar Bureau web site and for the most part that runs true with them. They say a shingle is sawn on both sides and a shake can have a split face and one face sawn.

Cedars, chestnut, white oak, black locust, osage, redwood, rock elm, yellow poplar and one old house I repaired had walnut shakes. Would not use hickory or maple for sure and I do not know about hemlock. Cherry is rot resistant but would seem like it would cup a lot and I could find better uses for it. Have sawn lots of shingles on my WM with the attachment they have and have split a many shake with a froe.


From contributor I:
I sided the house below with cherry. 1/2 in boards off the circle mill, chopped to length, and I started nailing. Cupping was not a problem. 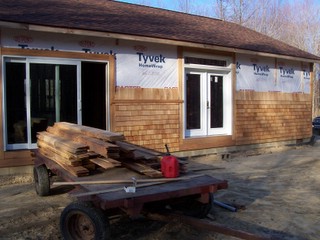 From Gene Wengert, forum technical advisor:
Contributor A is indeed correct that shakes are split (which gives them a uniform thickness as uniform as splitting can be end to end, as splitting follows the grain and the grain is parallel and does not taper). The shingles are sawn, usually giving them taper from end to end and therefore using less wood than a shake.

So, someone had the idea of making a thick shake and then re-sawing it at an angle so that it tapers and also so that the one side was smooth. Certainly, if this product is called a shake, it would have more appeal than if it were called a shingle. As the shingle or the sawn shake use less wood, they are financially preferred for large areas such as roofs today.

Of course, since only the heartwood has any decay resistance of note, and sapwood is more prevalent today with smaller logs, most shingles or shakes used for roofing are treated to resist decay and may be fire retardant treated as well.

I am curious what color that they cherry siding on Contributor I's house is as the cherry ages. Is it as elegant as I think it might be? Did you use only cherry heartwood? Did you have variable widths?


From the original questioner:
Thanks everyone for their replies. I've never heard of anyone using cherry before, but now that I do I might be more interested in using them. I live up here in the Northeast, so cherry grows almost everywhere. I live on a large plot of land that used to be a farm, so finding good quality cherry won't be a problem. I too, have thought of better things to do with cherry lumber, so that's why my barn is filled to the top with all kinds of lumber that I'm sawn. I use a Norwood model bandmill - it's low production, but it was so cheap that I was able to buy it and cut wood as a hobby.

I'm curious, were the boards that you cut 1/2" all the way though, or were they tapered? Did you dry the wood at all, or put it up wet? I've built Adriondack chairs out of cherry, so I can attest to the rot resistance (the galvanized screws rotted first). I've also used black locust for a small wooden bridge that I've made. It's about 20' long and uses 3 12" larch (Larix laricina) logs for the beams. It's weathered to a beautiful grey, versus the cherry which didn't have as uniform of a color (it has black splotches).

One more thing – Contributor I, did you have any problems with the cherry touching the housewrap? I've heard that surfactants in cedar can destroy Tyvek's moisture resistance. Gene, do hardwoods have surfactants?


From contributor D:
Shakes are usually tapered as well. I split a bunch by hand when I was a kid. If you turn the block and split the shake off alternate sides, they come off with a taper. If you don't flip the block, you get a shake with no taper. It works for cedar anyway.

From Gene Wengert, forum technical advisor:
I have watched them make shakes at Colonial Williamsburg and the shakes are fairly uniform in thickness, end to end but then they use a draw knife to taper them well.

From contributor I:
I wouldn't go looking for good cherry logs to do this. Most of these were fence trees, freebies or ones that needed down anyway.

My father in law and I sawed every stick in this house, except the roof deck and trusses. For the siding we would saw entire logs into a wagon load of 1/2" by mostly 6" and 8" boards. No taper. We cut the boards to 12" length and set the string for a 5" reveal. Under the starter row there is a 1/2 x 4 at the bottom to kick it back. We put them up just as fast we could and then sawed some more. The picture below is of the south side after two years. I plan on putting a sealer on as well. 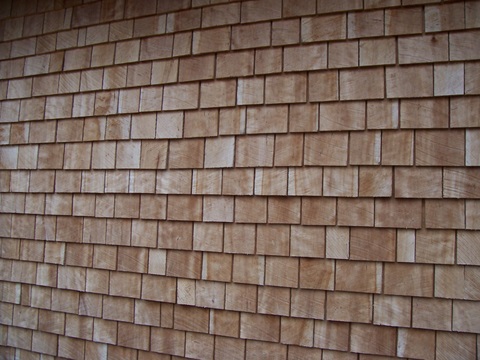 
From the original questioner:
Thanks for the pictures. They're very helpful and the house looks beautiful! I can see what you mean about not needing clear logs. The pieces that you used have a lot of character, which I think makes the house look even better. So did you end of hand nailing or using a pneumatic? Did you pre-drill so the pieces went up green too?

From contributor D:
If you split them all off the same side of the block they won't be tapered. If you flip the block each time they will be tapered. Don't know why this works but it does. I've done it myself as well as installing many shake roofs. All the shakes we installed were split and tapered. Maybe it only works for red cedar.

I am recently retired after 45 years in the shake and shingle industry, 10 as a shingle sawyer, with the last 20 as a shingle inspector for Intertek Testing Services. Don't waste your time trying to manufacture your own shingles unless it is really important to utilize some of your own trees on your home.

Go buy a few bundles of 18 inch No. 1 grade red cedar shingles for the dormers. You can also purchase these as sidewall products in a variety of styles with mill run faces or grooved or sanded faces. These come in rebutted and resquared with a regular straight butt or with a variety of other butt shapes such as round and etc.

Comment from contributor A:
As far as the old-fashioned way of making shingles or shakes, you split them with a froe. Those that have a taper to them are called "shingles" or as some call "shakes". Those that do not have a taper are known as "boards". I've made many of them and splitting with a froe you will end up with a large percentage having a natural taper, but it all has to do with having knowledge on how to use the froe. Anyone can drive a froe in a "bolt" (the piece of wood that you split in two to make the shingle) and split it in two, but after making several thousand of them you will learn to twist the froe just right to get the taper, and it takes a lot of experience with it to keep them from "running out" or splitting out short of the bottom. Those that do end up the same thickness all the way through (boards) were commonly used for out building roofs where beauty is not as important, as they will not lay down flat. You can take a drawknife and trim them down to have a taper.

Shingles are most often used on houses where beauty is more important. At any rate a split shingle has a much better look to it than a sawn shingle. Where I live, oak has always been the standby for shingles - red, white, and chestnut oak being the most widely used. A few people have used ash from time to time along with hemlock. I have never tried splitting hemlock but it is a very long lasting wood. I know of a few oak roofs in my area that are well over 100 years old, all with a steep pitch of course, but 50 years would be average. Make sure to split off the thin strip of sapwood on the edge because it rapidly rots away and in a few years causes leaks.


Comment from contributor B:
I lived in Idaho for several years and Eastern Oregon. We have trees called tamarack (western larch) that many people hand split for shingles on cabins and outbuildings. The grain is straight and it's much like cedar as far as a lay person like me can tell. I've known of several buildings that have been sided with this material for close to thirty years and they seem to be holding up well.