A discussion of the risks inherent in building a corner into a solid wood table or counter top. April 24, 2014

Question (WOODWEB Member) :
I am after some advice on mitering a solid L-shaped desktop. Timber species will be Teak, Iroko or ABW (still in discussion with client on this). The top will be edge-joined 38mm planks (6/4?). The plank width is not known as of yet. I would like to miter across the L. I’m trying to get my head around possible movement and whether the joint will become stressed and is likely to come apart. I plan to secure the top with expansion brackets but I am not exactly sure which direction it will move given the L configuration - maybe the angle of the L will open or close a little? Another thread at the Forums seems to indicate it will be ok, but I would very much appreciate confirmation and any advice or tips.

Forum Responses
(Furniture Making Forum)
From contributor P:
I've done it with acceptable, if not perfect, results. It was a 30"w hard maple desktop. The joint will open somewhat in response to seasonal wood movement. How much depends on the usual factors: wood species, width, quartersawn vs. flatsawn, etc. Maybe more importantly, is the room temperature and humidity controlled? Veneer is the way to go if you want the seam to be, seamless.


From the original questioner:
It's encouraging that it was acceptable with maple. Opening up a bit may not be an issue due to the distressed styling of this desk. How did you make the joint? Was it splined, loose tenon, biscuited, dowelled and what glue? I would normally use Titebond but had thought about using epoxy.

The client has asked the desk to be similar to those sold by Lombok in the UK (they don't do an L shape). He has some of this furniture already which is solid reclaimed teak, dyed almost black and imported to the UK from Indonesia. So they are quite "distressed" from new and definitely not veneered - think local traditional colonial. I am seeing the client tomorrow afternoon and will discuss humidity/temperature etc. (and take readings). This is in the UK so not large ranges - just pretty damp generally!


From contributor P:
The top is made of 6" wide x 3/4" boards, doubled up along the edge to make it 1.5" thick. There's 3/4" plywood with slotted holes under the miter, and I finished the top and bottom equally to control cupping since there's nothing underneath to secure the top. Sorry, no close-up of the miter! 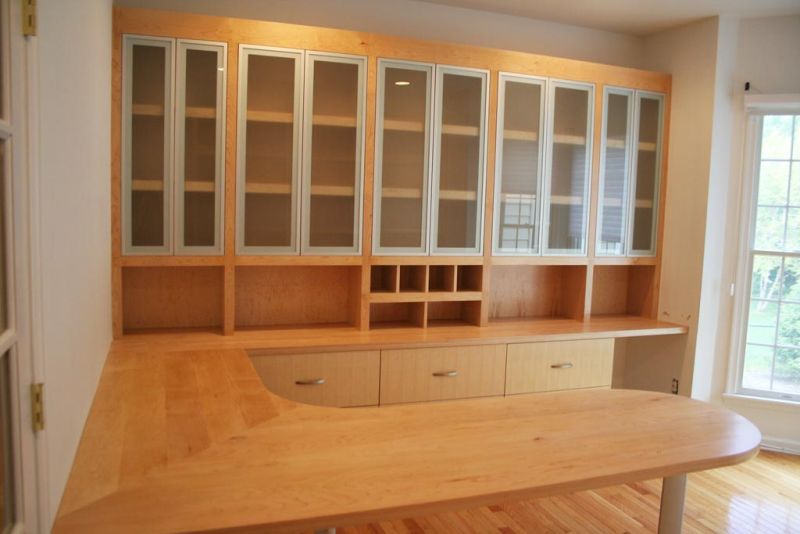 
From Contributor O:
I have often used the following as a thought exercise to figure my way through the question at hand. The two tops are 24" wide, solid wood quartered maple (thickness is irrelevant here), and at 6% MC coming from the lumber supplier. Your shop is about 30% RH, maybe a little less. You do an excellent job of cutting the miters and they match perfectly, and each defines a 45 degree angle. Finish goes on and all is well.

You deliver, install and whistle as you leave. After a year, the client repaints the entire house and adds several gallons of water into what was once a stable environment, or the basement floods. Or the in-laws visit for a month. At any rate, the RH increases, so the EMC increase, and the wood swells. It goes to 24-3/8" on both parts.

Now the miter changes. It becomes less than 45 degrees on each part, and if the joint is forced to stay tight (tite-joint top fasteners, for instance), then the two legs of the top will want to open, making for a greater than 90 degree joint/inside corner. Let’s say that you are aware of this likelihood and use a plywood spline under the top and glue and screw and fasten the heck out of the two halves, all to prevent any change in width. If the tops don't bow up as they take on moisture, they will still take on moisture - can't prevent it. Since the wood cannot expand, it will crush all the fibers along the points where it is restricted - at the joint. Then as the house dries back out, the crushed fibers will then separate and cracks will develop.

Long story short, the top is doomed. From here it depends upon your view of your work over time. Should it only last a couple of years, ten years, or longer? Is it correct to depend upon things outside of your control for the length of the life of the top, or do you have a responsibility to know all this and develop a strategy that will avoid the inevitable. Who knew wood movement could cause a philosophical self-examination.


From contributor P:
I'm remodeling a neighborhood bar and one of the bar tops is built using solid oak 1x6 boards, with miters. It was constructed by semi-skilled craftsmen (e.g., a friend of the owners) back in the 90's. It's held up surprisingly well, in spite of the fact that it's a bar, and two blocks from the beach. I'll be constructing new tops for the other two bars in the establishment soon, and I'm pondering my options. One is U-shaped, and the other is L-shaped.

From Contributor O:
My response is based on the scientific knowledge as it applies to solid wood and the environment. Anyone engineering or designing should follow the same logic, and arrive at similar conclusions. Witness frame and panel doors, where movement is accommodated/isolated vs. wood floors where each board moves within its own space, being fastened to a substrate. Flooring cracks would generally not be tolerated on a desk top, and maybe not even on a bar top.

There are two rules here:
1. Wood moves.
2. Woodworkers will disagree as to how much, when and where.


From contributor G:
Glue up a panel similar to your desk parts. Measure it right after the glue dries then leave it in the shop for two weeks and measure it every day at different times. We have been amazed at the amount of expansion and contraction on some species. Teak should be minimal but the power of wood movement is amazing.

From the original questioner:
This client/prospect cancelled the meeting last week and his PA said thanks for my help (I had produced a computer model and design drawings - I thought he was a serious prospect ) but he had decided to go for two straight Lomdek desks placed in an L configuration! I never did actually get to speak to the guy or even talk numbers - very annoying.

I know veneer is the best way technically but he wanted a desk in the style of Lomdek - which is solid reclaimed teak and very distressed, complete with bolt holes, gouges, randomly chamfered edges and ill-fitting joints. They are thrown together with second hand teak by Indonesian carpenters and are very trendy with a certain set around London. So a mitre opening up a bit would probably add to the overall effect! The next question was how to do the distressing as I have not done this before. I think the advice about trying it out is good and should I get this again I will make the top first and measure movement for myself.