Very rarely, some sapwood in a tree will fail to convert to heartwood, leaving the appearance of a light, bleached streak in the wood. March 13, 2009

Question
I have recently purchased some French oak for a tabletop. Once I had planed the through and through cut boards I noticed there were bleached areas of timber on the planed surface. It appears to run along the grain. The bleached areas look like sapwood in color but are in the centre of the tree. They do not appear to be any softer than the surrounding heartwood but are a real visual defect as far as I am concerned.

Can anyone diagnose what this is? A fellow furniture maker suggested that it may have occurred during kiln drying. I thought it could be the signs of early decay of some kind of rot that has not softened the timber yet.

I would like to return the wood to my supplier but I want to understand what it might be before I try to return the wood. The oak was bought at a high price to get prime quality material and personally feel it is a visual defect and not an attractive natural feature. Any thoughts or ideas? 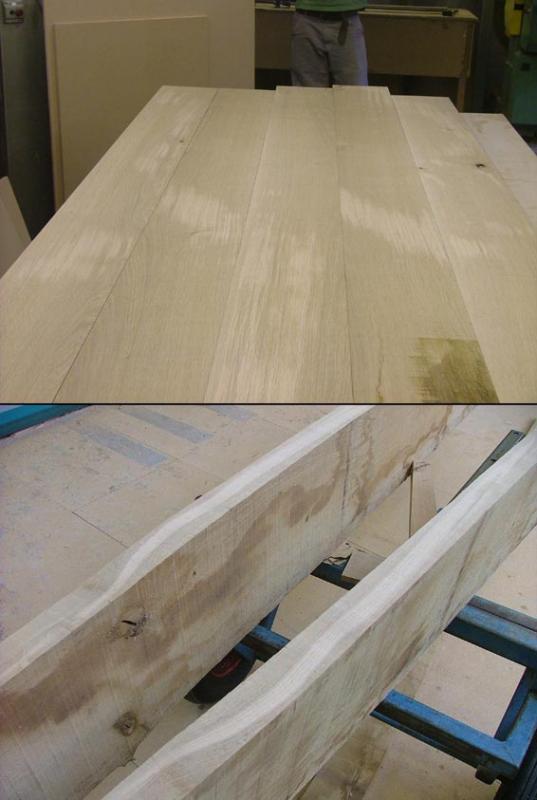 
From contributor D:
I recently dried tan oak and saw something similar. The rough boards looked fine but the planed boards had light areas. I was told that the light areas were the natural color and the dark majority was the result of enzymes and sitting too long.

From contributor C:
Gene - look at the edge on photo of the boards. It looks like a ribbon running through the wood.

From Gene Wengert, forum technical advisor:
Sure enough - I missed that. It looks like sapwood and some of the wood did not convert to heartwood while most of the rest of the wood did.

From the original questioner:
Thanks for everyone’s responses. Since posting I have had lots of useful suggestions. I have since tried to get some kind of exchange or reduction of price. So far not much luck. The sawmill says it is a common natural characteristic of oak, particularly because I have machined the oak.

I can understand where they are coming from but feel it’s not that common and I certainly didn’t expect to find it during planing. I have since purchased more wood from a different supplier at my own cost.


From Gene Wengert, forum technical advisor:
The oxidation stains are primarily surface phenomena and would not result in the white areas in the center of the piece as shown in the photo. That is why I do believe you have some areas on the wood that have not converted to heartwood and so still have the white sapwood appearance. This is indeed rare, but I have seen it before.