Tips on making the transition as smooth as possible. September 9, 2004

Question
I would like tips for making the change to metric. Not 32mm specifically, but rather general "learning to think metric" ideas. Already installed the dual tapes on equipment and hip pockets. Now I have to change hearts and minds. I keep having memories of the Mars space mission a few years ago that missed the planet entirely because we (NASA) forgot to convert to the metric system...

Forum Responses
(Cabinetmaking Forum)
From contributor T:
It's the other way around. The engineer from England input metric coordinates into our standard, which caused the famous miss. We are the guys with the 1/16" fudge factor.

I applaud your leap of faith into the metric world. It certainly will not hurt but there will be some hurdles. A lot of our hardware and supplies are still on the US standard and probably will be for some time, so there will be confusion related to this. Also, it's just that in the US we have a standard that we have used for a long time and it will be difficult to get the lay person to come around.

I think it would be best if you just convert to the true 32 system. You will have less headaches in general. For example, if you want to communicate with an outside source here in the US, you would most likely have to convert your dimensions to standard just to be understood, or risk the chance of just missing it by a fraction. I'm sure that the British and Europeans would love it, though.

From contributor F:
To help the process, some common cabinet standards may move the process along.


From contributor R:
When I went through the process, a calculator was absolutely necessary and I used the 25.4 mm in an inch constantly. You can buy a Casio for a few bucks instead of paying for the construction master ones. Actually, I thought it was best to use the 25.4 to actually understand rather than just pushing a conversion button. In time it will get easy to think in terms of metric. All the guys picked it up pretty quickly. Going from metric to imperial is a lot tougher.

From contributor J:
I recommend you use the correct conversions, not the ones that contributor F suggested. 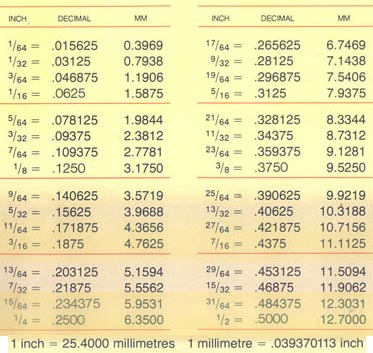 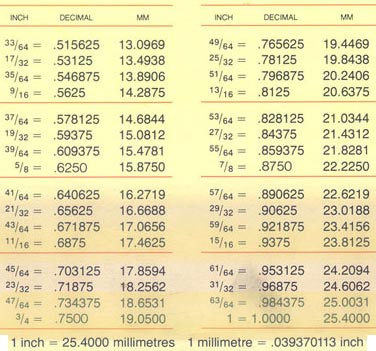 From contributor M:
Metric is easy for anyone who can count up to 10. Metric is all in units of ten. Don't try to bounce back and forth with inches and millimeters. I find it a lot easier to train someone to read a tape in millimeters than fractions. A lot easier to add round numbers for multiple cabinets on a wall than with fractions.

From contributor N:
That's right about the ten unit count. In all truth, metric is a much easier system than the one used in the states. When I moved back to the old country years ago, I had to convert overnight, so to speak. Friday I was using fractions and Monday I started millimeters. All my mistakes the first couple weeks were in groups of ten. So measure twice. The double tape is just too much of an eyesore for me. When working quickly, there's a chance of mistakes. I prefer two separate tapes.

From contributor J:
Being English, I had to do the conversion to metric some years ago (I was brought up with imperial). I found it much easier when I let go of the imperial, stopped trying to convert all the time, and trained myself to think in metric. Constant converting is just postponing the time when your guys need to learn to visualize in metric.

From contributor S:
Anyone who knows U.S currency knows the metric system.

It helps to have a tape measure marked liked this:

Forget about inches - you should only ever need to convert when dealing with the world outside your shop. Measure metric, cut metric.

Comment from contributor A:
Don’t agonize on imagined difficulties and the thoughts of errors in conversion from one system to another. Just throw away the conversion charts and double duty tape measures and what have you. Ignore the centimeters and you are left with meters and millimeters. You can add M or mm to any figure in use, but in practice this is rarely necessary as common sense dictates what a measurement signifies.

As for any regret in having the alien French metric system imposed on me replacing centuries of tradition, forget it - all I have left is a huge embarrassment at how antiquated and inefficient the old system was. Curiously I still think imperial measurements when it comes to screws and nails, but metric sizes are more sensible. One thing is that the metric system allows a calculator to be used, so don’t be surprised to find the lads on the tools quickly acquire one. Do not issue drawings with both measurements - this only causes problems. Why convert? The old system is dead, or should be.

Comment from contributor B:
I was the Production Supervisor of a country planing mill when the company 'went metric'. The General Manager addressed the crew in front of a fire in a 44 gallon drum. He walked aroung taking each person's 3' folding rule and threw them in the fire. Then he walked around and gave each person a tape measure. After that there was some initial confusion, but we avoided the conversion problems.