Question
We just got a commission to build a dining room table - 10'x3.5' or so. We've built some smaller end table pieces in the Nakashima style, but never one this big. Can anyone give me thoughts on what to look out for, like base top connection, top warp, base joinery? We have a game plan, but before I begin I'd like to hear from some masters.

Forum Responses
(Furniture Making Forum)
From contributor T:
I was going to say something until I saw your website. If you have done that level of work, I don't think there is much I can add. Very nice! I tend to rely on slotted screw holes with washers on the stainless steel sharp thread screws, but that's probably similar to what you use already. There is probably some fancy thing you could do with dovetailed wood ways or something, but screws work for me, if done properly. Plenty of traditional joinery is called for to deal with that heavy top. If it's a trestle kind of base make sure the bearing points on the floor are at the ends of the trestle legs so it rests solidly on the 4 outer points.


From contributor W:
I did a 29 x 58 coffee table and was worrying about the solid top warping and compensating for the large wood movement. I saw an article where they moved the movement to the middle of the table. I did an S-curve cut along the length of the table, used large dovetails to attach the legs to the top and 1 1/2 inch hard maple dowels between the legs and floated brackets near the "split" on the dowels.

From the original questioner:
What would George do? Unfortunately I don't own any original Nakashima work nor have I had the chance to examine any of his pieces in person.

What we have is two large slabs acting as legs. They will be tied together with stretchers or aprons where need be. I'm most concerned with the joint at the top of the leg. I was under the impression that there was no cleat separating the top from the leg, but instead the leg and the top would appear to meld seamlessly, when in fact there is some blind stub tenon or the like. Am I completely wrong about that?

From contributor B:
You can do multiple tenons and not have to do any stretcher. Takes some careful layout and a fair amount of time, though. 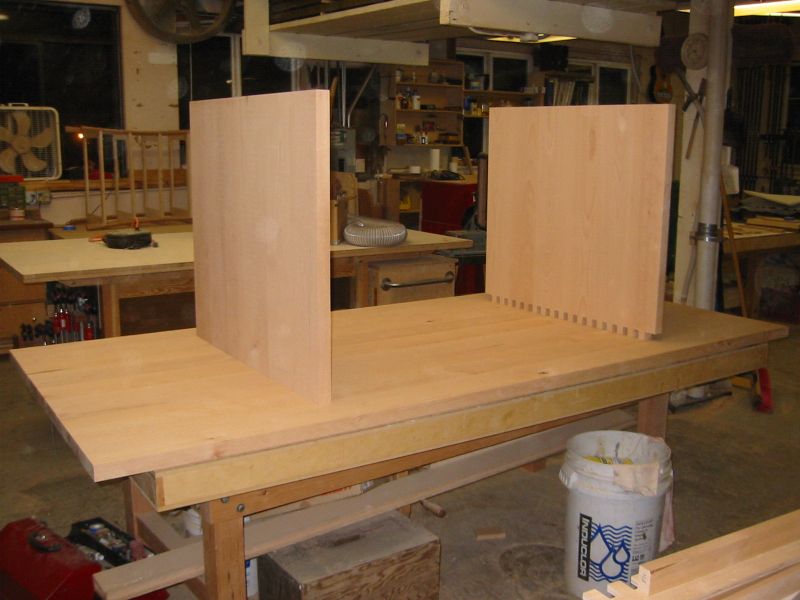 
From contributor J:
I had the pleasure of being in the shop while disassembling (and shortening) a Nakashima sofa table once. It was similar to contributor B's image, but with fewer tenons. It was quite a feat to get it apart! If your legs can go at the ends, through dovetails would look great and be strong.

From contributor B:
That's interesting. Yeah, if we had to do it over again, I would cut the number of tenons in half.

From contributor R:
Another joint that can be used for large solid wood construction is a blind segmented sliding dovetail. It is your basic sliding dovetail with every other 2" section removed on the tail and on the slot the opposite 2" sections are routed with straight sides. You insert the tails into the straight sections of the slot and then slide it over 2" and it is locked in place. The only glue necessary is a couple dots in the middle. In practice I find it easier to rout the straight sections first and then square up the corners before routing through with the dovetail bit.


From the original questioner:
That's a very intriguing idea. I was hoping for a simpler joint. As I understand the design for this table has the legs set at diverging angles, and with a housed stretcher between them I think it may add a new level of frustration to have to slide them into their corresponding slots. I like the thought and will definitely look into it.

From the original questioner:
Here's a photo of the table. 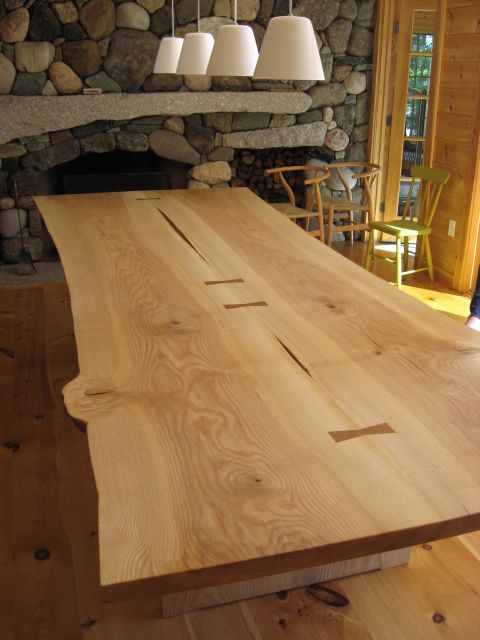