Question
I am preparing a proposal for a project that includes 1.75" doug fir entry doors. They consist of two styles with planks (rails) running from top to bottom. The planks are flush with the styles. How would you build these doors? I am thinking a standard frame (styles with rails top and bottom) with a plywood panel and then lay up 0.5" thick "planks/rails".

Forum Responses
(Architectural Woodworking Forum)
From contributor R:
You have to allow for wood movement. If you have the "planks" flush with the stiles with no rails you would be fine as the whole door will move as one. As soon as you put stiles on it that restricts the movement of the panels in this case. Attaching 1/2" material to a plywood panel will not solve this problem but restrict the movement further. The panels will either split or separate from the plywood or both. Your best bet is to build the plank door with no stiles. I have never seen a plank door with stiles. They have consisted of all glued up planks, sometimes having a "V" groove at each seam. I would dowel each piece to help keep the door from bowing across the face or put planks across the back screwed and bunged. Elongate the screw holes to allow for movement.

From contributor R:
The horizontal planking is easy enough to do. Tongue the ends and attach them to the rails. I would dowel the top and bottom planks to hold the door together. The benefit of the v groove is that you can use it to conceal the little spacing for movement. The vertical planks are a non issue if they run the full length of the door as all are running the same. 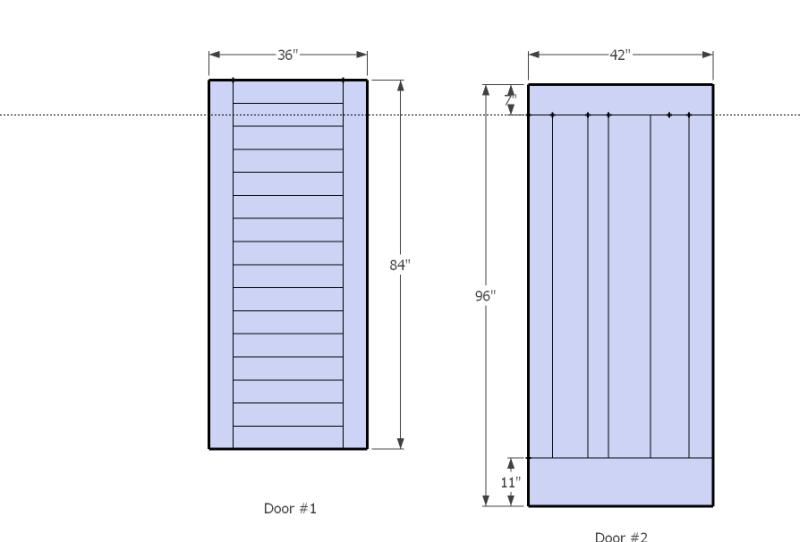 
From contributor R:
Ok. Now I see what you've got to deal with. Think of door #2 as a table top with the top and bottom rails set as a bread board edge. Tongue the ends of your planks and groove the rails. Pin them together with dowels through the tongue and groove on the first, middle, and last plank. Elongate the dowel hole on the tongues so that the wood can expand and contract. You can glue the field together just as a tabletop. It will give you the strength you need and since there are no stiles to constrict the movement you don’t have to worry about the spacing.

As far as door number one is concerned I would dowel the top middle and bottom rails to the stiles as in standard door joinery, allowing the others to float like a regular panel. The only difference is that you won't have the bevel like on a raised panel. Tongue and groove them in and use the v to hide the 1/16" gap between each plank, that way there is some room for the wood to move. Fir is going to move like crazy so make sure you seal all the ends real well before assembly to minimize it as much as possible. Assemble tongue up groove down so water runs of and doesn’t collect in the grooves. You may be able to run the grooves on the panels a little deeper and use some kind of silicone as an adhesive that will still allow the wood to move and achieve "weather tightness". Otherwise the wind will be whistling through the panels.


From Gary Katz, forum technical advisor:
I don't know, I'd vote for making the second door with full-length stiles if you can. It sure would be a lot stronger.