The example shown could be done with T-mould, thick edgebanding, or a thermoformed panel material. June 10, 2006

Question
Can anyone direct me toward a product or technique that will allow me to create the nice radial corners shown below? The laminate material appears to be of a thickness that allows a large radius on the horizontal edge as well. 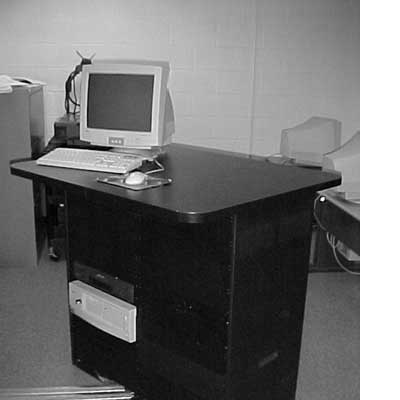 Forum Responses
(Laminate and Solid Surfacing Forum)
From contributor A:
You should be able to round your corners using a straight bearing bit on a hand router, with a template. Simply clamp your piece to the template, and cut the corner while following the template with the bearing.


From the original questioner:
Thanks, but my question is directed toward the laminate material that will allow such a corner and not show the typical color-line at the joint.

From contributor D:
What you are looking at is T-mould, which is available from Charter Industries, SFR, Outwater, and many other suppliers. After your top is laminated, run a slotter around the edge. There is a barb on the inside of the T-mould that you drive into the slot with an air hammer or a mallet.

From contributor M:
I would suggest using a color core or soli-core laminate. The color goes all the way through.

From contributor A:
It's hard to tell, but it is also possible that this part is edgebanded with a 2 or 3mm edgeband, or it may be thermoformed vinyl off of a membrane press.

From contributor D:
We produce thousands of worksurfaces each year, and this could be one of ours. The edge is T-mould. Color-through laminate is brittle and will not make the radius, even if heated. If this top used a thermoformed membrane, the edge would be the same color as the deck. If the edge were 3mm edgeband, it would be twice the cost of T-mould. The only reason to use 3mm edgeband is if you corners without a radius.

From contributor A:
The edge looks the same color as the surface to me. We do hundreds of surfaces with radius 2mm edgeband that is a custom match to our board laminate. Our customers prefer the seam over t-mold. I would agree that t-mold is easier to do though.

From contributor B:
Try using a hair dryer or heat gun (not too close) to warm up the laminate. It will bend around some pretty tight radii. Make a sample run on a radius smaller than the one you plan to cover. This will let you know if it will work for you.