Woodworkers discuss the appearance and workability of Red Elm for kitchen cabinetry. August 11, 2009

Question
We're remodeling the kitchen for a fussy client. They are looking for something different and have indicated that they like red elm with its medium color and subdued grain wood. They have ruled our walnut and cherry (too dark), hickory (want a more consistent color), alder (too soft) and oak (high contrast grain). I have not worked with elm before, but heard that it's has the tendency to split. Does anyone have any experience with elm? Or does anyone have any other recommendations in this situation?

Forum Responses
(Cabinetmaking Forum)
From contributor G:
We work with red elm quite a bit. My own kitchen is red elm. I wouldn't call the grain "subdued" but it is beautiful. Splitting is not a problem in and of itself but red elm is prone to shake and sometimes it is hard to detect. With sharp cutters it works well. It takes stain and clear very nicely. I personally like the natural color to show with a clear finish only.


From contributor C:
I agree that elm is not that subdued in grain, but more subdued than oaks, ash, and hickory. It has a very interesting zig-zag pattern in it when you look close. I don't think splitting is more of a problem in this species. Maybe someone didn't pre-dry it well, or as stated above, it may have had shake, but can't most or all hardwoods exhibit shake? In fact, as far as splitting goes, it doesn't split easily. It was disdained for firewood early on when only axes were used because it was so hard to split. The grain has some sort of cross-linking and fibers can hold on to each other tenaciously. For a more subdued grain, I'd look at maple. Soft maple is well priced now, but so is elm.

From contributor S:
I agree, for a subdued grain I'd go with maple. But I did one job for a client with similar requests and I did it in oak. I was selective on board choice, avoided any reds or knots, and finished it with "pickled oak", sort of a whitish tone. They loved it!

From contributor J:
Use it, it’s beautiful. Keep it out of the mulcher. I wish there was more of a market for it. I've done a few jobs in it and had no problems with the material. It does drink the finish though.

From contributor R:
Sorry, don't mean to distract, but I've never heard the term "shake". What does that mean?

From contributor C:
Wind shake, ring shake: a defect along the growth rings that looks like splits, but it follows the rings. Caused by physical stress while growing (wind), that breaks the bonds between growth rings. It ruins the wood for most purposes if it is present. Most mills will spot it and not process it further, but some minor shake can get through. If you see the wood come apart at the rings, it's shake.

From contributor G:
Here's a photo of red elm cabinetry in our home. 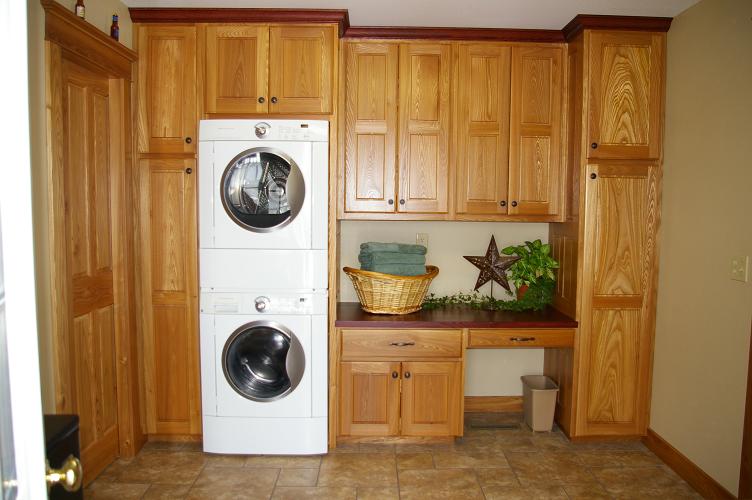 
From contributor L:
For "subdued grain" rift sawn in most any wood is relatively subdued. I wouldn't say plain sawn red elm is subdued. I've used it, what I got tended to be narrower and shorter than most other lumber. Its light weight and kind of soft. It's easier to work than the other elms.