"Counter-depth" refrigerators don't provide a true built-in look: the sides are exposed, as this cabinetmaker learned to his (and his customer's) dismay. November 2, 2010

Question
I just finished a kitchen remodel that included a Kitchenaid kfc022evbl counter depth refrigerator with applied panels that match the cabinet doors. Now that the ref. is in place, it looks unsightly because the cabinet panels on both sides are 25.5 in. deep, as is the ref case, but the doors stick out another 3". As a result, you see the sides of the doors which are black protruding out beyond the panels. When customers order a "counter depth refrigerator", this is not what they expect. Making deeper panels won’t work, because the doors will hit them. Now the contractor is unhappy and wants me to fix it. Has anyone else encountered this problem before, and come up with a solution? The photo below is from a previous job, not the one I just completed, but it’s the same ref. model. 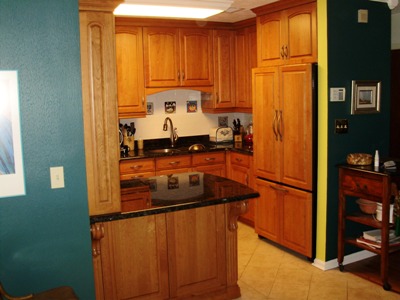 Forum Responses
(Cabinetmaking Forum)
From contributor B:
The problem is in the location of the pivot point in the refer door hinges. This is a common thing, one that the refer manufacturers don't seem to pay attention to. Sometimes the refer needs to be 2" - 3" away from a side wall in order for the doors to open even 90 degrees. This is something that you cannot fix. The pivot point would need to be out towards the front corner of the door more, and that is something you can't change. I don't like the looks of these "counter depth" refers for this reason but what can we do?


From contributor P:
"Counter-depth" is a very different animal than "built-in". The hinging just doesn't work for a close fit, per Contributor B's comments, above. If you build the sides deep enough to bring the doors into the same plane as the upper cabinet faces, there needs to be a couple of inches of side clearance, thereby negating any built-in look. The spec sheets I've seen (Amana, K/A) don't really address this issue.

I build my case a couple of inches deeper, but let the customer know that the doors are going to sit proud of the cabinetry. If they can't deal with it, they need to spend the big money for a full built-in or find another fool who thinks he can make it work.


From contributor U:
I saw this same situation coming at me on a recent remodel deign and told the customer about what was going to happen. They argued another cabinet maker told them it was easily done. Very nicely I told them to let him build their new kitchen. They did and got the same look as the OP does.

From contributor G:
The best defense you have in this situation is the fridge installation guide. Make sure you followed it and then show the contractor. I have had this come up before, not the exact same problem but similar. I showed the architect the spec from the manufacturer and told them I would be happy to do it another way. It will cost you "this" much. If they show a variation that addresses this problem then try to split the cost with them. I’ve been there too. Good luck and if you're in the right, stand your ground with a smile.

From contributor A:
I once got around this by making the base cabinets 29" deep instead of 24. The extra depth of counter is really nice too. Little late for that solution though.

From contributor L:
The closest arrangement to a true counter depth refrig that I have experience with is a GE or a Subzero. The wall behind the refrig can be opened up to the use more space to move the unit back. I have been involved in this technique several occasions.

From contributor H:
Your customer bought the wrong refrigerator. You did the best you could do. The builder could open up the wall behind the fridge if there happens to be space behind there (garage). We have done that many times before, only because the homeowner was cheap and bought the cheaper refrigerator to save money. The homeowner and builder are first in line for this screw up. If I can I make sure that the swing on the door is correct, so an opening is only 1" more than the width of the refrigerator. If the fridge is deeper I make a deeper box also. If they bought the wrong refrigerator it's the wrong part for the kitchen.