Same stain brand and color, different result: what's up with that? Advice for a new finisher on getting the color he wants. August 29, 2014

Question (WOODWEB Member) :
I built an oak bookcase for a customer last year (first picture) and made up some stain samples. They chose Minwax Golden Pecan 245 and I hired a finisher to finish it on site after installation. Recently they asked me to build a matching TV console. I've been doing my own finishing since then and I am finishing this console in my shop. The problem is that I am using the same Minwax Golden Pecan 245 stain and red oak ply and hardwood, but the color is quite a bit darker and more of a brownish hue than the original sample I made for the bookcase. The original color was more orange/pink than what I am getting now. Everything was sanded to 120 grit for the bookcase and the TV console.

The finishers for the bookcase brushed the stain on and wiped off. The large back panel in the second picture I sprayed the stain on, let sit for five minutes, and wiped off. The smaller sample to the left I sprayed and wiped immediately to see if it made a difference in hue. The square, pinkish piece in the middle is the original sample for the bookcase. Any suggestions on color I can add to make the stain more orange/pink, or is it already too dark/brown for that? Could the problem be that the red oak plywood has less pink hue and more brown than the plywood from the bookcase? Is it possible that the stain color is just different from one can to the next? All I've stained so far is the backside of the back panel of the console, and I'd like to get a better match before going any further. 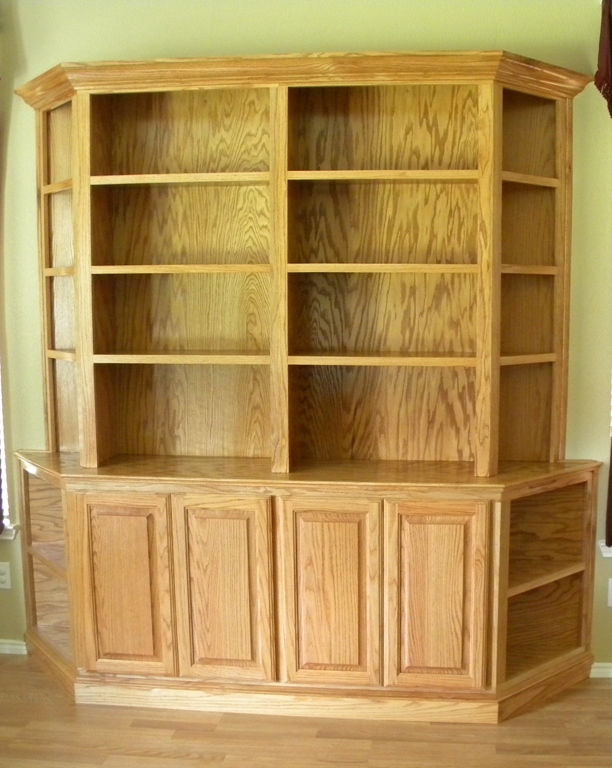 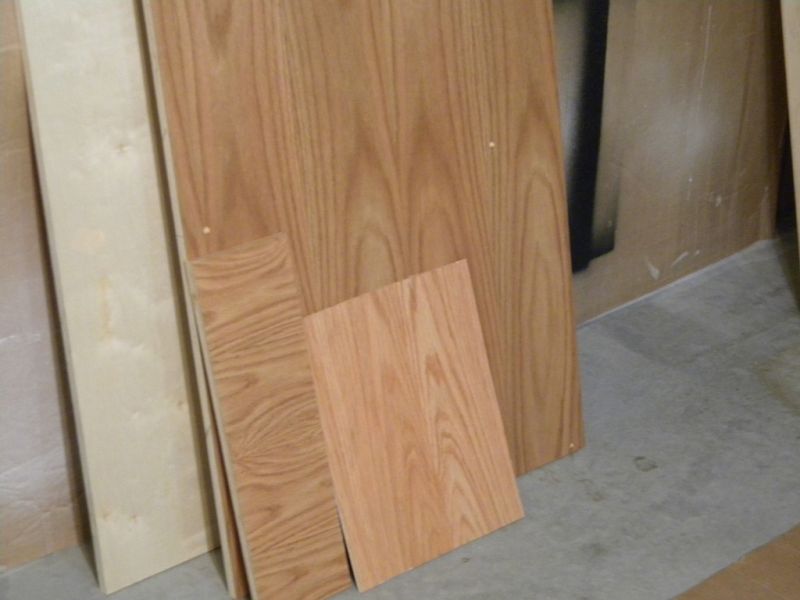 Forum Responses
(Finishing Forum)
From contributor T:
I can't really see much via pictures on the internet and the pics were probably taken under different light. Just wondering what finish your finish guy put on over the stain (finish). If nitrocellulose, it might explain the difference. Your smaller pinkish square looks pretty similar to the doors on the unit except lighter and pinker. The nitro would push the pink towards orange as per the doors.


From the original questioner:
The square sample in the second pic does actually look very close to what's represented in the first pic of the bookcase, but you can see from the second pic the difference in color I am getting using the same Minwax stain color. The original finisher's process was stain, sanding sealer, and top coat with nc lacquer.

From contributor R:
Normally, I would try to neutralize the color difference with an undercoat of dye. In this case it already looks too dark and knocking out the pink would darken it even more. I'm not sure if the colors are accurate in the photos, but the new work looks too pink and too dark. If that's the case, I'd try bleaching and see if the same yellower look could be attained that way. Maybe a more precise description of the color differences would make it easier to recommend something.

From contributor I:
Are you absolutely certain he used golden pecan? It looks like it might be golden oak. I'd forget the names, mix up something that looks right, and get on with the job.

From contributor T:
If you got the stain at HD or Lowes who knows what you got. It could be a bad batch. Could be somebody returned a can that he modified.

From the original questioner:
I decided to make a trip back to the customer's to double check my sample so I just took a door with me while I was there. I'm going to take it up to SW and have them try another can of Golden Pecan on a sample piece or just make me a matching stain color. I took another pic and I'm seeing more of an orange hue in the door and my original sample as opposed to a pink/reddish hue in the new samples; just seems like a difference in color from one can to the next. 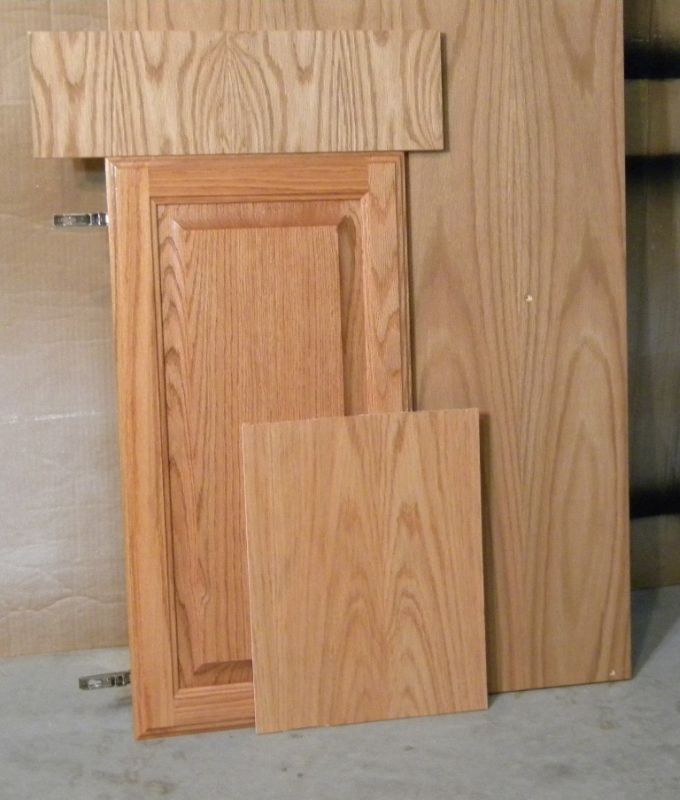 
From contributor R:
Thanks for posting a photo with same lighting, exposure, etc. I see two things. One is that the flat stock (veneer) is different even between the new pieces. The one smaller panel looks much more similar to the original unit than the taller pieces in the back. For that piece, I could see a yellow aniline dye stain sprayed on lightly before the wiping stain is applied. The larger pieces in the picture look like the darker grain picked up too much stain and are subsequently darker. Here, a shellac coat first might restrict absorption of the darker grain and keep it from going too dark (these things are so much easier in person).

One other thing you might consider is to take some of the representative pieces to the job site and compare the color as it appears there. I can't tell you how many times I've seen things look totally different in the home compared to how they look in the shop.

Lastly, I would take no notice of what stain was used on the other piece. You need to make, or have made, a stain, or combination of stains (both pigment and dye) to replicate the earlier work. It means nothing that something in particular was used, it matters what will make it work now. Being locked into a particular stain or brand makes no sense when separated by so much time. Use what works; it might be the same stuff or it might be not.


From the original questioner:
Well it's definitely not a different stain; I'm convinced now it's the plywood. I took my original sample, door, and raw ply sample from current project to SW. The guy tried the Golden Pecan on my sample, and, as I knew, it looked different. So he brings out a strip of red oak ply that he had there and wipes some stain on it and it matches my original sample perfectly (see pic). Apparently the red oak ply I got when building the bookcase was much more pink than the ply I have this time and had a significant effect on the color. Anyway, he made up a custom color to wipe on the sample and sprayed lacquer on it and it looks pretty close to the door; good advice RRM.

My intent in orienting that back panel horizontally was to add visual interest to the piece with the juxtaposition of a non-traditional construction method. It's mostly covered with pictures and such now; I realize it's not a traditionally authentic look, but what do you think of it? I almost wish the owners would have chosen not to have doors so you could have seen the horizontal grain along the entire base cabinet; it looked pretty cool. 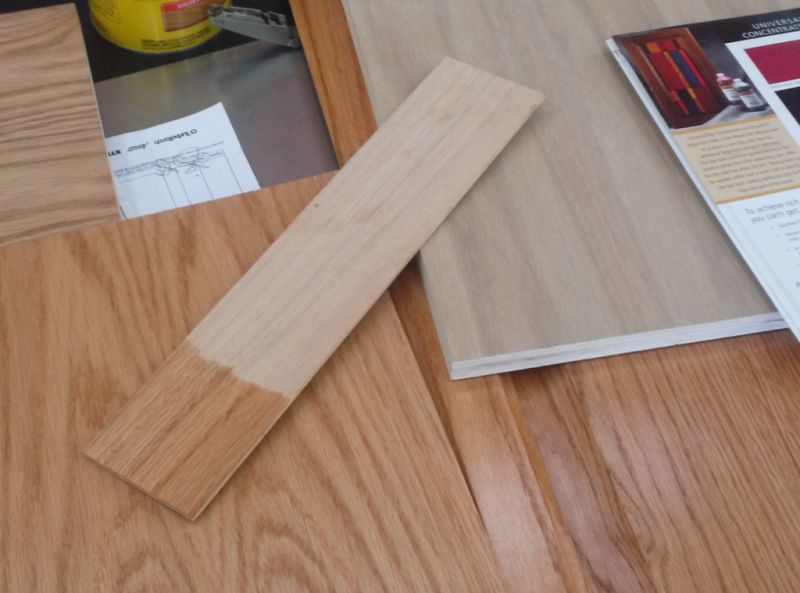