Retrofitting Corbels to a Brick Chimney

Woodwork installers contemplate how to attach new corbels and a mantel to an existing brick chimney, when the existing corbels are a little dubious. March 26, 2010

Question
These corbels seem to have shifted and now lean downwards. The customer wants a new mantle and I need ideas on how to attach new corbels that will cover the existing holes and be solid. I don't even know how these corbels are held in place.

I thought about cutting these flush, driving lag bolts into what's left and cutting keyholes into the new corbels. Or trying to pull the old corbels out and making new ones to fit in place and epoxy them in.

This is the first fireplace for me that does not have pilasters supporting a mantle shelf. New mantle will be solid 4" T walnut with 8" T corbels. 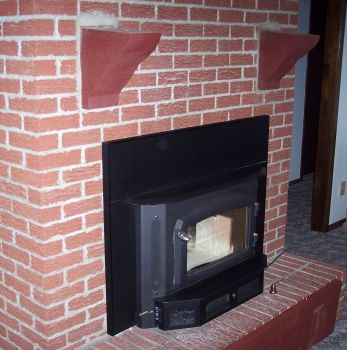 Forum Responses
(Architectural Woodworking Forum)
From contributor J:
I have run into this several times. If the existing corbels are solid, I would construct the new corbels to encompass those and cut off enough of the existing to allow the new to slip over them (again, if they are solid, they will lend themselves to good fastening).


From the original questioner:
The existing corbels are solid rough cedar, painted. They are about 7-8" thick. If I understand correctly you would cut these down to look like a tenon and have a mortise in the new corbel. Is that correct? I like that idea, along with some Gorilla Glue. Maybe some pegs driven through as well would look nice.

From contributor E:
If the corbels tilt down now, they will tilt later. You need to secure them before going on. I would take them off. Screw a block into the hole, making it flush with the face of the brick. Make a new corbel big enough to cover the hole. When you make the mantel top, make it to slip over a 2 by, which you secure to the brick. Screw down through the top into the 2 by. Add trim to cover the screw holes. Get paid. Go home.

From contributor P:
If the corbels are securely in place, another option is to set your mantel in position on top of the corbels. Mark the location of the corbels on the bottom of the mantel shelf. Next use a straight bit in a router and plow out 1/4" or 1/2" or whatever you like, where the corbels go. You can make a template for the router and shim it at the proper angle to compensate for the amount of tilt on the corbels.

From contributor K:
I have run across several where the previous guys just flat nailed a 1x4 to the brick with about 100 16 gauge brads. Then they hung the mantle on the 1x4. Surprisingly these stayed in place very well. When I replaced them, I left the 1x4 there and attached the new mantle to it the same way.

From the original questioner:
I'll be replacing the corbels that are there, so they are coming out. The problem I'm having is how to attach new corbels, whether it be to the brick or a wood block inserted into the hole left after taking the old corbels out. I suppose some dowels would work but I'm looking for other solutions. The shelf that rests on top is not a problem as far as fastening.

From contributor P:
If it gets painted, plenty of liquid nails and pocket screws or toe nail and fill holes. If you need to conceal it, then dowels.

From contributor S:
It is possible that the corbels were installed to accommodate twisted wood. They are obviously just mortared or even tuck pointed into the brick. The idea is to obtain a solid bond to the brick surface. You have no idea what air space is between the brick and actual framing member, so screwing a block, getting paid, and going home sounds good, but without demolition, how do you know what to screw to?

If they seem to have sagged over time, but feel solid, I would drill 3/8" holes around the perimeter of the corbels and inject a masonry epoxy, Sikaflex. I would then cut it off and use it as something to attach to. Sure you can tear them out and just screw a block into the cavity, but what happens when a brick comes along for the ride?


From the original questioner:
That's good advice. I believe the corbels did shift down because the mantle shelf was leaning as well (not shown in picture). There is no way to tell how far these are mounted into the brick until I actually start some demolition. Injecting epoxy would work if I knew it wouldn't just run down the cavity or something.

I am going to try and talk her into a new corbel mounted to a pilaster which is screwed and plugged to the brick. This seems to be the simplest thing to do and I didn't think of it till now.