Selecting Fans for a Solar Kiln

Advice on picking fans that will move the right amount of air and not fail from overheating. February 8, 2008

Question
I recently completed building a solar kiln, using the plans provided by Virginia Tech. It's approximately 6' deep, 13' wide, 10' high, designed to dry 1000 board feet. According to the information I've found on the web, most people are using 20" window fans purchased from the hardware. I installed three of these "thermally protected" fans yesterday, and after reaching around 120 degrees inside the kiln, the fans stopped working. Does anyone know specifically what fans would be appropriate for this application?

Forum Responses
(Sawing and Drying Forum)
From contributor D:
You will probably need to jump the thermal cut-out.


From contributor O:
And increase your insurance coverage.

From contributor D:
Contributor O, wouldn't you say that proper fusing would be adequate?

From contributor O:
Not really. Those inexpensive fans can overheat, melting the varnish on the windings, and cause a fire. The internal overload is there for a reason. It is because the windings cannot safely tolerate the heat rise. A fuse might catch it but most people oversize fuses and if they have the fan on, for example, a 15 amp circuit, a lot could happen before it blew. A motor should have both overload and fuse protection to meet code. I know that a lot of people do this and get by, just like a lot of people ride motorcycles without a helmet and never get hurt and a lot of people smoke two packs a day and live to their 80s... But I think we should discourage bad practice whenever we see or hear of it. People will do stuff anyway.

From contributor D:
I agree that we shouldn't give bad advice, but the thermal cut-out can shut down at normal kiln temperature. Maybe the advice should be to buy fans with good motors without thermal O/L. But they aren't so cheap.

From the original questioner:
Thanks for the responses. I should add that I may have been using fans that were too small. They were 14" fans. It could be that the 20" window fans move enough air that they would equalize the temperature in the kiln. Measuring both the top inside (170 degrees) and the bottom (120), it's evident that the fans weren't doing their job. I'll try the larger fans before disabling any fuses.

From contributor K:
I have had my solar kiln up and running now for 9 years and I built mine from plans out of an article in Wood Magazine. Only had one fan go out in all that time (I live in Louisiana and it gets hot here). The plans had me using ring fans that were meant to be used in attics that were obtainable from Granger Supply for about 75.00 each. The size was 9" and I can't remember how much air they moved, but the plans had a simple formula to tell you how many to install in order to do the trick.

From contributor V:
Be careful how much air flow you end up with. One brand of fan may have twice the air flow of another of the same size. Spending a few minutes estimating your air flow could save a big headache later. Too much air across a load of oak for 2 or 3 real hot days and you could be trying to find a market for oak toothpicks.

From contributor B:
That brings up a good question. How do you know the amount of air-flow needed? I'm also thinking of building a kiln, from plans off this site, but it doesn't say the size of the fans.

From Professor Gene Wengert, forum technical advisor:
For the cfm needed, multiply the thickness of the sticker (inches) times the length of the pile (feet) times the number of layers, divide by 12, and then times 125 feet per minute (desired velocity). Then add 50% to this number to allow for leakage.

From contributor I:
I use two attic fans - the type that you install in the roof that have the dome shaped cover over them to keep the rain out (just throw the dome cover away). They already have a thermostat that you can install in line and set it to turn the fans on at the correct temp. And they are built to withstand a lot of heat in attics. My kiln has been well over 160 degrees and they keep on running. The picture shows the two of them in my solar kiln. I put some louvers in the frame-out that you see hanging down to disperse the air a little. They are designed to fit between two rafters set on 16" centers - about a 14 1/2" inside frame-out. I paid $42 each at McCoy's Lumberyard. 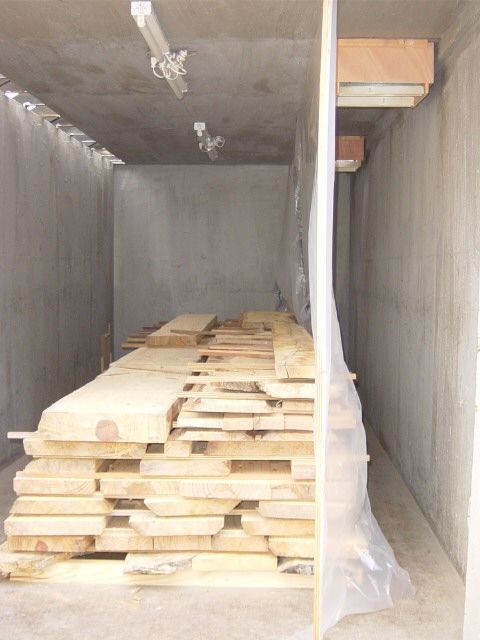