Question (WOODWEB Member) :
I am new to wood sawing, but have been doing woodwork for all my life. I have always wanted a mill and finally talked my wife into getting one. I love it. Has anyone built a kiln and used a solar panel to power the fan for drying? I want to put the kiln a bit away from a power source and don't quite know how to go about it. What kind of fan and what kind of panel would work?

Forum Responses
(Sawing and Drying Forum)
From contributor Y:
I have found on the net amongst the green house equipment suppliers all sorts of cool widgets that could be used in a SK. Yes there are fans there as well. I am sure you could implement a 12v battery and a standalone photovaltaic panel. You don't need excessive air if you AD well enough before kilning.


From Contributor J:
I built our solar kiln with two panels and direct wired them into camping fans. The fans run great off the panels - two fans per each panel. They come on when the sun is up and are off in the evening. They lasted all summer in the kiln when temperatures inside shot past the 150 limit on my remote thermometer. I run the panels direct - no battery and no timers.The fans come on when there is sun and turn off when there isn't sun.

From contributor Y:
I think those panels are 45 watts, or about 1/20 h.p., at peak sunshine. Do you find you can move enough air with them? How consistent is the moisture content of the wood in different parts of the kiln? Good to see you're reaching 150 deg. It'll get rid of the bugs.

From Contributor J:
I am getting air movement. I started with four fans. My kiln is the Wood Magazine design - a little different from the VA tech (8ft x 12ft). I have room to add more fans if I need it but my kiln isn't very big. The 150 degrees was with an empty kiln and it won't last long enough to kill bugs.

From contributor Y:
I use 20" box fans for up to 300bft. I buy them up at yard sales or wherever I can find them. The older ones are much better. Careful what you offer on how you deal with bug control. It’s always best to curb the infestation right off the mill as you sticker.

From contributor G:
You might also think about using computer cooling fans mounted to a piece of plywood. They run on 12 volts and for their size and current draw they move a lot of air and can withstand high heat. Wire them in parallel off of the HB panel.

From Contributor M:
I like the circuit design of the direct connection from a 12v panel to a 12v fan.
Generally you should try to match the electrical specs for the fan to the panel. If you have a multimeter/ammeter, put it on the 20 Amp setting. This often requires moving the red lead to the "20 A" slot. Then connect this in series with the fan and connect it to a battery. This will tell you how the current in amps the fan draws. The battery voltage is typically 12 to 14 volts.

For some reason, so called "12 volt" solar panels often produce peak power at around 18 volts. This presents a slight mismatch that may or may not be an issue. If the panel produces as much or more current than the fan draws, then the fan will run faster than its rated/design speed. The fan is much more likely to overheat and burn out, especially in a solar oven at high-noon! For this reason it's likely better to de-rate the fan if you're hoping it will last. Here are some ways you can deal with this. You can wire two 12 volt fans in series. Rather than running this circuit at the full rating of 24-28 volts, if you run it off the panel's 18 volts to de-rate it 30%. Then the fan will run a bit slower but won't overheat.

Another method would be to match the power rating in watts of the fan to be about equal to the solar panel rated power. Volts multiplied by amps equals watts. This will cause the fan to draw more current from the panel than its peak-power rating ("I pk"), and so its voltage will sag down to around 12 volts or so. The panel won't be operating at peak efficiency, but hey, it's a simple solution.

Typically a DC fan will still start at about 1/2 of its voltage rating. If the fan doesn't turn when you hook it up, but otherwise the fan works, and the panel puts out voltage, then it may be that the panel doesn't put out enough power to turn the fan. If the voltage is below 6 volts under load, then that's the culprit. This is a likely outcome for trying to run a big car-radiator fan from a small solar cell. Doing that would likely require several amps and several square feet of solar cells.

You could even wire such a circuit to reverse the fan direction with a DPDT switch or relay. This can cause a current surge when it reverses though, so it may be necessary to buffer it. One clever way to do this is to put an appropriately sized incandescent light bulb in series with it to soak up the surge, and help protect the motor and solar panel. If a relay was used, the fan could even be setup to reverse periodically, for example by using a 555 timer wired in bistable mode, with a very long a time-constant of an hour or something.


From the original questioner:
We are just starting to build our open air drying shed and then comes the kiln. We’re still thinking about solar also so thanks for the input.

From contributor Y:
I'm in the design phase of a slightly different solar concept. Kilns do not necessarily need fans. What they need is a way to move air. This can also be done with a chimney. I'm working on a design that uses three 4' diameter by 20' long sections of black plastic culvert pipes covered with clear UV resistant plastic. As the air in the chimneys heats, it (the hot air) rises, drawing air through the kiln. It moves more air than you'd think, has no moving parts, and requires no electricity. I will keep you posted when I get a full-scale prototype working, but it is simple enough that you could build one on your own.

From Contributor M:
Very creative idea to use the stack effect. I ran some numbers on it. There are some technical issues that need to be worked out. The main issue is there isn't a good way to get the heat into the air. The wall of a large tube doesn't make a good heat exchanger, so the air in the center will be cold and won't rise. Another issue is that the heating is distributed along the stack, when ideally all the heat should be at the bottom so that the air is hot over the entire height. I think a more efficient way to do it would be to put a solar collector close to the ground. It might be a piece of clear plastic a short distance above a flat-black surface. The chimney could be mere inches in diameter. One way to do it would be to pull air from the kiln into the solar collector and up the chimney.

From Contributor M:
Another problem is that the chimney is essentially venting the kiln, which will lower the humidity too much for many drying schedules. Perhaps there's a way to get convection within the kiln. For instance heat the south side and cool the north side. This might work with really good heat-exchangers and a tall enough air circulation loop. You could also have an upside-down "U" shaped stack on top of the kiln, with the south side heated, and the north side shaded and cooled. In this way you can get a similar convection effect without needing to vent humidity, and thus you have independent control of humidity.

From contributor Y:
I agree on some points, disagree on others. There certainly are better heat conductors than the walls of plastic tubing, but I'm thinking low cost. The corrugated walls should help move heat away from the inside surface of the tube as the air rises. I also like the idea of a separate panel to pre-heat the air, but remember, the air in the kiln will also be warm and once drawn into the chimney will help in the convective draw. Not clear about your comment about the diameter needing to be mere inches. We're looking at a low pressure, high volume system.

From Contributor M:
Not conduction in the plastic, conduction in the air itself. Air is an insulator. It's hard to get heat into air. This is why car radiators and air conditioners have hundreds of closely spaced aluminum fins. I've studied this, I'm an engineer. If sunlight hits black plastic and heats it, that heat is going to heat air that is up to one inch away from it, not one foot away.

You sound like you're talking about an open-cycle convective air drying system, not a closed kiln. Are you air drying firewood, or air drying lumber? What you speak of is not what we call a kiln.

Not clear about your comment about the diameter needing to be mere inches. You can still move several hundred or even thousands of CFM through a chimney that is one foot in diameter or less. At some point a chimney will be too wide to have any draw, since most of the air inside won't be warmer than ambient, and thus it won't have any buoyancy. For the air to rise it must be buoyant, and hotter than ambient, and the heat needed to heat all that air must come from somewhere, and the heat must get into the air somehow, for instance by the air passing over a warm surface. Air itself is translucent and doesn't absorb much sunlight or heat. If you have an open-cycle with a high flow rate, there won't be enough heat to raise the temperature much above ambient, thus wood drying will be slow and buoyant convection will be slow.


From Contributor M:
The power that an ideal fan uses, is proportional to the cube of the air speed. This means that 1/2 the air speed gives 1/8 the power requirement. Fan efficiency is often higher when the fan is run slower than its maximum speed. True airfoil fan blades are also likely to be more efficient, but this is probably isn't worth the trouble.

Let's assume that you've previously air-dried the lumber down to 30% MC. As you can see in the attached image, at low MC and low air speeds, the drying rate is proportional to the air speed. So if the air speed is cut in half, the drying rate is half. All of this helps a lot with solar powered air circulation, since a lot of drying can still be done with low power, and 1/10th the power still dries about 1/2 as fast. 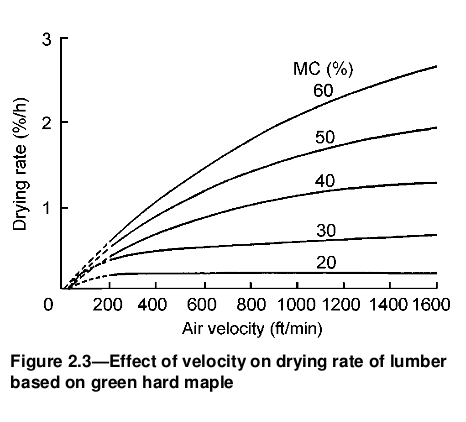