Forum Responses
(Cabinetmaking Forum)
From contributor R:
It would be nice to have a ride-along pin inserter on the CNC, like the dowel shooter.


From contributor P:
Not to mention the burn-out factor for the helpers! I'd be stark raving mad before lunchtime on the first day!

From contributor L:
Are they brass or steel grommets?

From the original questioner:
They are bass.

From contributor H:
My first thought is that you should be getting more than 6,000 parts per day per employee. That's 13 parts per minute; when I worked in electronics manufacturing we had employees who routinely averaged well over 20 parts per minute. And that was for stuffing many different components on a complex circuit board with tiny legs that had to fit in to tiny holes.

We worked standing up, at benches made of 2x4's and plywood. They were about 14 feet long so you could stuff ten boards at a time. The work surface was angled at something like a 45 degree angle, so you can reach the whole board without bending too far - kind of like a long tilted drafting board with a ledge at the bottom to support the boards.

An automatic inserter would make sense for a product you're going to produce for years. For a one-time, three month project, I'd build some benches like I described above and hire some apt people and tackle it that way. I think 20 parts per minute would be my goal for everyone, with a 15 ppm minimum. It depends a bit on how easily the parts fit in the holes; if they take a fair amount of pressure then you may need to add a step where you press them home - ideally in a jig, all at once.


From contributor T:
That is only 4.17 pieces per minute per person. I only use the 1/4" grommets, but the principle would be the same. I took a short (about 2 1/2" long) 1/4" carriage bolt and attached a rubber crutch end to the head of the bolt. I screwed a nut with a "built-on" washer on the threads about 1/4". The washer faces the end of the bolt and keeps the grommet straight. The crutch end cushions my hand when I press the grommet in. After I have loaded a board, I use a rubber hammer with a 4" carriage bolt with the nut/washer setup and no cushion to set them all. Your story reminds me of getting the popcorn kernels off the cob when I was a kid. Our thumbs would be so sore after a couple hours!

From contributor H:
I guess I misunderstood, I thought the 6000 ppm was per person, not all three. Definitely, 2,000 parts per person per day is way, way too few.

From contributor S:
How much pressure in needed to set the grommets? Hand pressure or hammer? If only hand pressure is needed, you could build a pea shooter device by loading the grommets on a pencil rod that is smaller than the diameter of the grom and about 24" long. Slip a metal tube over the rod with an inside diameter slightly bigger than the rod and tap the groms home. Keep one hand on the top at the tube end and the other on the bottom holding the groms and inserting the rod into the holes.

From contributor B:
Right now we are using a hammer and a specialty punch to insert the grommets. One good hit with a 24 oz. hammer knocks them in all the way.

From contributor F:
Like someone said, if you were in this grommet insertion for the long haul, a special machine or tool could be fabbed and the cost absorbed. I can envision an air tool that would require the grommets to be collated like nails or screws. I think collation is the key for any serious machine aided production. In your case, it seems that more bodies might be what it takes to meet your schedule.

From contributor L:
I was hoping that a magnetic system would be the answer, but obviously, that’s not the case. Developing a dedicated system would be useful, but with your timeline, I don't think that a feasible system could be built and debugged in time. I'm envisioning a jig. Drill a linebore matching the hole spacing, but oversized just enough to allow the grommets to slip in easily. Lay packing tape over the row of grommets. Now you can peel up the strip of grommets and lay them onto the actual panel. They can be tapped into place and the tape peeled away. It’s still fairly labor intensive, but faster than trying to hand set each. A small countersink on each hole of the template will allow the grommets to drop into place pretty easily.

From contributor J:
I would look into retrofitting an air nailer and sleeve to handle the grommets. I was watching some DIY show that had a nailer refitting to de-nail reclaimed boards. If you have a machine shop nearby, take the grommets and an old nail gun over to them ask them to make up a magazine for the grommets and a driver head for the gun. The driver head would also serve as the alignment to the holes, and if you have a gun with a depth gauge on it already you can set it to give you exactly the depth you need. Then it’s only about loading up the magazines to keep up with the drivers.

From contributor G:
This might be a nutty idea, but your project sounds perfect for a sheltered workshop like Goodwill Industries. The people at Goodwill are a pleasure to work with, and you would be helping develop job skills for disadvantaged or disabled workers. If you can get your parts there to be assembled, I'm sure they would work with you to accommodate your production schedule. The likely have dozens or hundreds of pairs of hands that would willingly do the assembly work for you.

From the original questioner:
Thank everybody for your responses. They really helped. We resolved the problem with an air hammer and a custom made attachment designed to fit the grommet. One man is putting in 20 per minute now.

From the original questioner:

Here is a final picture. 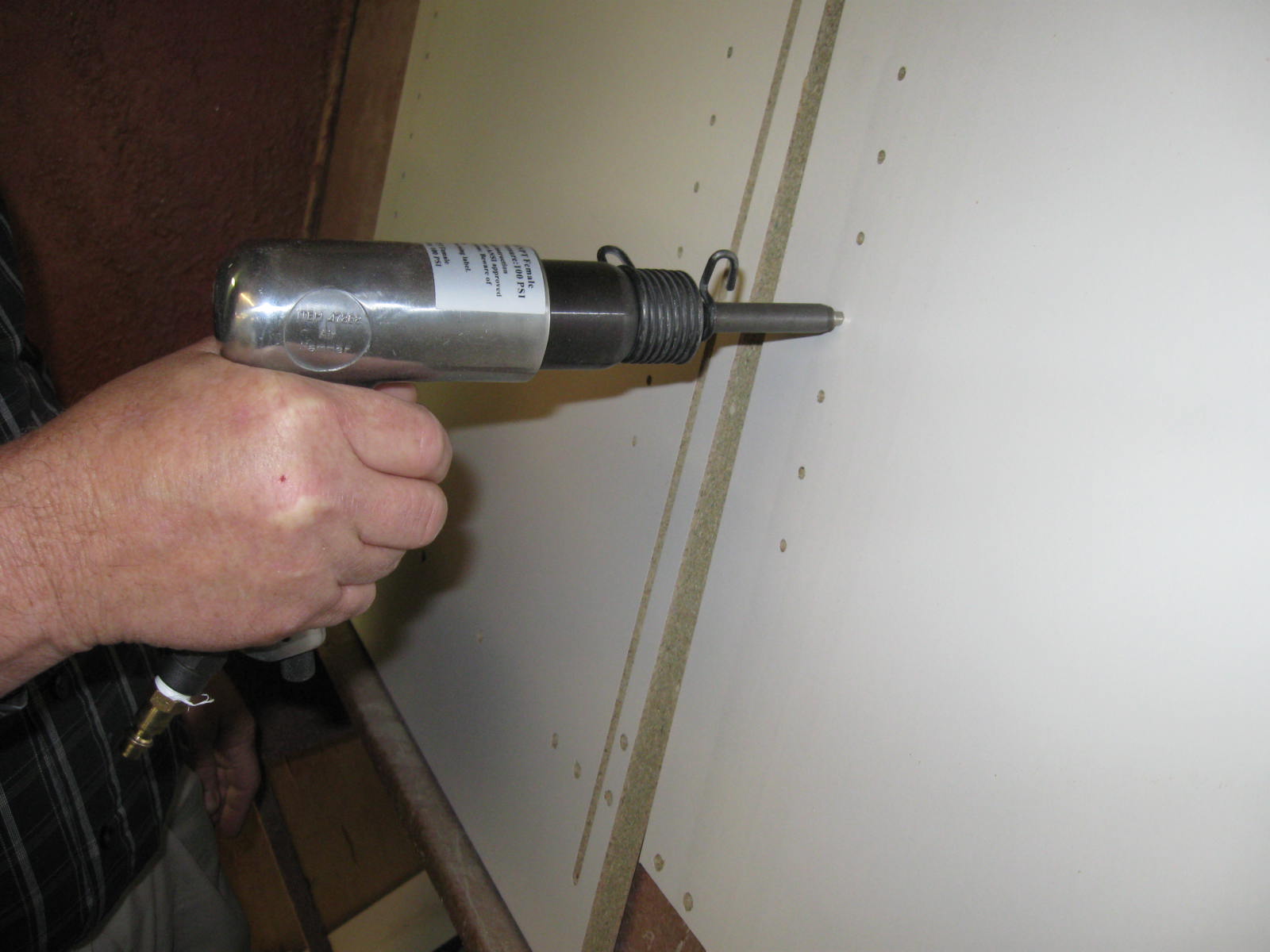