Alder is an under-appreciated wood that takes stain and paint well. Here, finishers discuss how to get the best results with it. October 26, 2005

Question
I've got a new table to stain and was told it was made of alder. I have never worked with alder before. Does it take stain well? Anything to watch for? I will be spraying a water base stain.

Forum Responses
(Finishing Forum)
From contributor D:
Alder is prone to blotching. If you want a clean, even stain job, you need to use a washcoat on the wood first, followed by a light sanding, then you can stain it. If you're looking for the rustic look, just go ahead and stain it. In the picture below, you can see an alder door I made for someone that I did not use a washcoat on. You can see all the darker areas where the stain was absorbed a lot more than other areas. 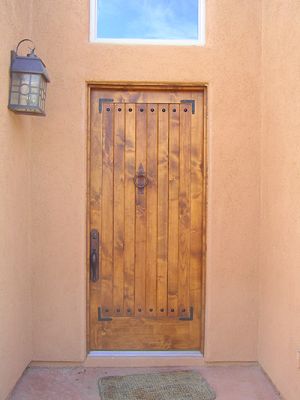 From contributor M:
Some people (finishers, too) think that the natural figuring in some woods is actually blotching. They do look similar, but figuring is natural coloration in the woods, and wash coats will not hide it.

From the original questioner:
Looks like it takes stain similar to maple (excellent picture - just what I needed!). Nice looking door, as well. Thanks.

From contributor G:
In my view, alder is a vastly underrated wood, due completely to poor finishing technique. It has fantastic three dimensional and translucent qualities, as well as tremendous grain figure.

However, it blotches more like pine than maple, and that greyness gives it the cheap rustic look, while ruining the grain figure. Further, no two boards stain identically, so too many colors cheapen the look.

Proper finishing requires a well sanded surface, to 220 at least, and a strong wash coat before staining.

I've found alder looks better with lighter stains. The browns only add to the rustic effect. I've had success toning first with aniline dye in a light yellow/slightly brown hue to even the boards out and figure the grain, then staining with reddish browns. But the colors are not as important as removing the blotching. As you can see, I'm a big alder fan - it has great depth when done right.


From contributor B:
Nice looking door. What do you know? A wood door that actually looks like wood. I'll never understand why most finishers try to take the wood out of the wood. If you want even grain, use even grained woods. As a woodworker first (finisher by necessity), I always try to steer my clients to a more natural look.

As for alder, here in SoCal, it's probably the most common wood used for cabinets. I see more alder come through my shop than any other. Been that way for years. I believe what contributor M said about figure and blotching is applicable to alder.

If it's an aniline, it will highlight any grain/figure of your table. If that's what you're looking for, great - if not, you could glaze/tone to even it out.


From contributor D:
That was actually the first door I built in our shop when we decided to make our own doors. The door knocker was added by the customer later and she decided to offset it in fear of splitting the joint in the middle. Now I make sure the center of the doors has a full plank just for that reason (experience by trial and error).

Two points to add to all the above well informed posts. Grain and figure are two different things. Most alder sold does not come from large trees, so one gets a lot of stock that is cut close to knots, so the growth rings are rarely straight grained. When one applies a stain to grain that is not parallel to the surface of the board, and is almost end grain, the stain absorbs much faster, and darker areas are seen, such as the door in the photo (which is a great looking door to me). Some customers want the Formica look, so some jobs require 100% same color on a project, hence washcoats.


From contributor M:
One does not always get one color from wash coats alone. This depends on the wood. It is the translucent tinting toner that gives uniform color on different color boards. In some cases, a stain, colored glaze, or a shading stain may be needed to complete a finish.

From contributor G:
"Grain and figure are two different things."
It would appear you are attempting to lay to waste the time honoured phrase "figuring the grain". However, your explanation falls short. Perhaps you or someone else can explain better why "figuring the grain" no longer makes sense to you.

When I washcoat and dye, it is specifically to avoid the "near end grain" to which you refer, which is the cause of some of the greying and blotchy effect so prevalent in alder. I hope most finishers are aware what "figuring the grain" refers to, and that is highlighting the unique growth patterns, and minimizing effects from poor milling, or defaults incumbent in rapid growth species.


From Paul Snyder, forum technical advisor:
Alder is known as poor man's cherry. It takes finishes almost exactly the same as cherry and the same range of colors works well on it. It also looks good with "mahogany" and "walnut" colors (which don't look right on cherry, in my opinion) and takes paint as well as poplar, if not better!

The door above is a good example of how the wood finishes if you don't take steps to keep the coloring even. And that's the rustic look that was desired, so it works well. Nice door!

I think contributor C made a good point about the difference between grain and figure as well as using a washcoat to even out the coloring. Of course, sap stains, toners, glazes, and shading stains can also be used, as needed, to get even coloring with varying effects. I can't say I've heard of "figuring the grain," but in my area we probably have another name for it... something like "finishing."

In this sample of curly maple, the curly figure runs horizontally and the grain of the wood runs vertically. 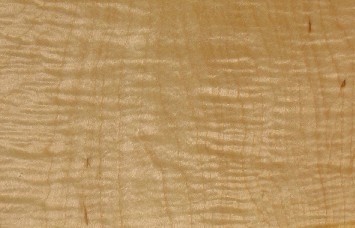 When contributor C says "grain and figure are two different things," it makes sense to me and I usually explain it the same way. If you have a favorite finish(es) for cherry, the same finish(es) will likely look great on alder. At the link below, I described the steps I used to finish a TV armoire that had alder doors, poplar trim, and birch ply panels.


From contributor M:
Usually, "grain" refers to open or closed grained woods, whereas "figuring" is character marking, which is natural shaded color growing in wood. My reference to "figuring and blotching" was that figuring is an accepted characteristic. Blotching, in most cases, can be prevented with sanding, wash coats, glue size, a drying oil, or gel stains. I agree - the door does look good with a rustic look, because of the natural markings in the wood.

From contributor B:
Call me a finisher who's probably inhaled too much sawdust. I've always understood figure to be in relationship to the grain. For instance, when the grain in soft maple becomes curly, it's referred to as being figured. In fact, when you buy curly maple (or just about any exotic wood), it's graded on its figure. The more figure, the more money. In something like vertical grain Douglas fir, the grain would have no figure. As a result, when I get to finish some beautiful species of wood, I like to highlight figure and not glaze/tone it away.

I would say that rustic is more an element of design, not the uneven coloring of the door. The hardware lends itself more to rustic, and no doubt the overall design of the house. Otherwise, I'd better tell my wife that the entertainment center I built and finished (very uneven coloring) for our contemporary home using some wild curly maple is really "rustic" :)


From contributor M:
To me, these woods are figured. In some cases, the wood's grain runs with the figuring; in others, it doesn't. The door looks figured to me. (There is nothing wrong with figuring - it's not blotching, it's a characteristic of the wood.)


From contributor T:
For alder, dyes are the way to go. Here in Phoenix, alder might well be the most popular wood of all and as such, I've developed ways of staining it that eliminates the blotching, which is its major problem (behaves exactly like cherry in this regard). Light passes with dye to get the right color. Seal, and then glaze and topcoat, is the most popular finish we've come up with. This method, done right, is absolutely blotch free.

A washcoat (about 3% solids) works well if you insist on using a wiping stain. The washcoat should be this thin so that it soaks deeply into the alder, which is a very soft wood. Also, the best wiping stains we've found for use with alder are those made by General Finishes (Prelude). Alder is the only wood we can get here in Phoenix that's very high quality, as all of the cherry currently being shipped in completely sucks. Stained well, the stuff in truly beautiful and comparatively cheap. Highly recommended.